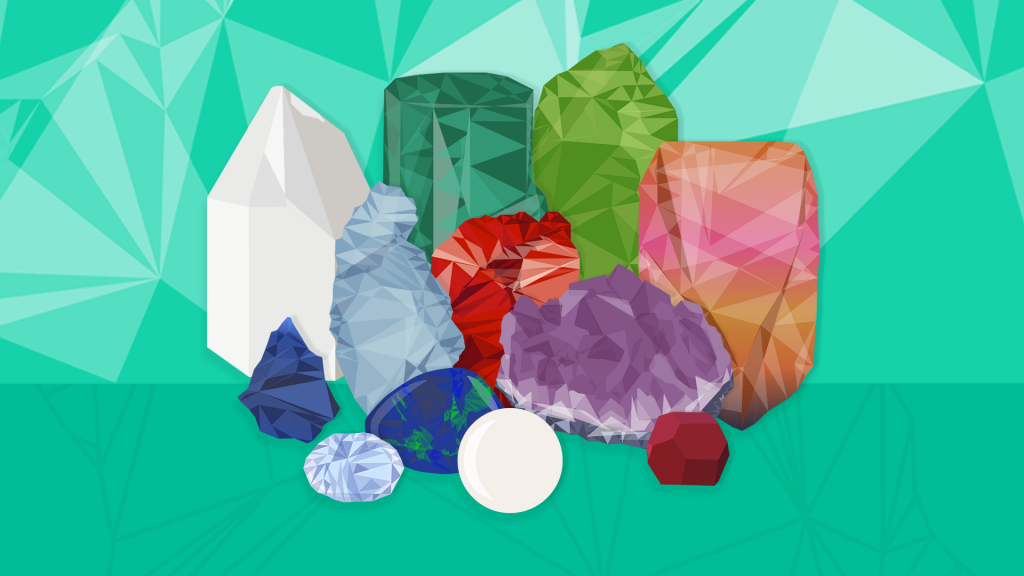 Western Australia enjoys an abundance of minerals and gemstones that are found under the ground and in the ocean. Discover your birthstone, its meaning, and where you can find it in WA.

When you think of Australian gemstones, you think opals, pearls and diamonds – but that is just part of the story. In 1912, the first ever birthstone list was created, and this list is now considered to be the definitive list of birthstones.

Best of all, every one of these gemstones have been uncovered in Western Australia. Read on to discover your month’s birthstone, its meaning and more.

The garnet stone symbolises devotion, vitality and balance. In Western Australia, the most famous garnet stone is the Coorara meteorite, recovered from Coorara Station on the Nullarbor Plain. And despite its intergalactic sounding name, this dark purple garnet was formed in the earth’s crust.

This truly eye-catching birthstone is a highly prized purple quartz. With its rich deep violet lustre, this February birthstone is usually associated with nobility and security. High quality amethyst stones can be found in The Great Australian Amethyst Mine, in Wyloo Station, Western Australia.

If you were born in this month, then your birthstone is the stunning aquamarine gemstone. This vivid aqua blue birthstone symbolises loyalty, honesty and beauty. And even though aquamarine is rare in Australia, this gemstone can be found in the Nardoo Hill in WA.

Diamonds represent purity and strength (and some even say they’re a girl’s best friend). Most Australian diamonds are sourced from the Argyle diamond mine in WA, one of the world’s largest diamond mines and the only diamond mine in the world that consistently produces rare pink diamonds.

Best known for its brilliant green colour, this month’s gemstone symbolises wisdom and faith. In 1958, an 8.7 carat emerald was found in the Pilgangoora Mining Centre, near McPhee Hill. Now, Sydney is often referred to as the Emerald City, but perhaps McPhee has a stronger claim on that title.

Pearls represent success, happiness and love. Unlike the other gems on this list, this June birthstone is formed in the shell of an oyster with shades that range from cream and pink, to gold and silver. In WA, pearling existed before European settlement, with tales of Aborigines trading pearls with Sulawesi fishermen.

July’s ruby is a symbol of love and luck. The name of this gemstone literally means red, originating from the Latin word “ruber”. Rubies can be found at the Yinnietharra mine, which is about 165 kilometres of dirt road from Carnarvon. But the drive is worth it for the deep red treasure beneath the surface.

If your birthday falls in August, then your birthstone is peridot, a symbol of strength. Often called the ‘evening emerald’, this gemstone has a distinctive appearance due to its naturally-occurring olive green colour. A variant of peridot is found at the 21 kilometre Ravensthorpe Nickel Mine in WA.

Most commonly associated with a strong blue colour, September’s sapphire represents peace and purity, loyalty and faith. Sapphires also come in pink, white or yellow. This gemstone is rare in WA, but has been found in Williambury Station prospect, located 200 kilometres north-east of Carnarvon.

October’s opal is the national gemstone of Australia, symbolising hope and innocence. This birthstone is named after the Latin word “opalus”, meaning stone. More than 90% of the world’s opals are found across Australia. In WA, the Norseman opal mine (near Kalgoorlie) produces many lustrous opals.

For those born in November, this birthstone symbolises faithfulness and friendship, and is thought by some to have healing properties. Found in a variety of colours, topaz is rare in Western Australia – however, 16 WA mines have excavated the gemstone over the years.

December’s blue topaz represents strength and wealth. Grosmont Mica Mine is a blue topaz deposit, sitting within sight of the Grosmont gold mine. This site was discovered in 1896, and is of particular interest as blue topaz is rare in Western Australia.

So there you have it. Every one of these birthstones have been found in WA, arguably making it the Australian capital of gemstones. So next time your birthday comes round, insist on a little piece of Western Australia to wear.