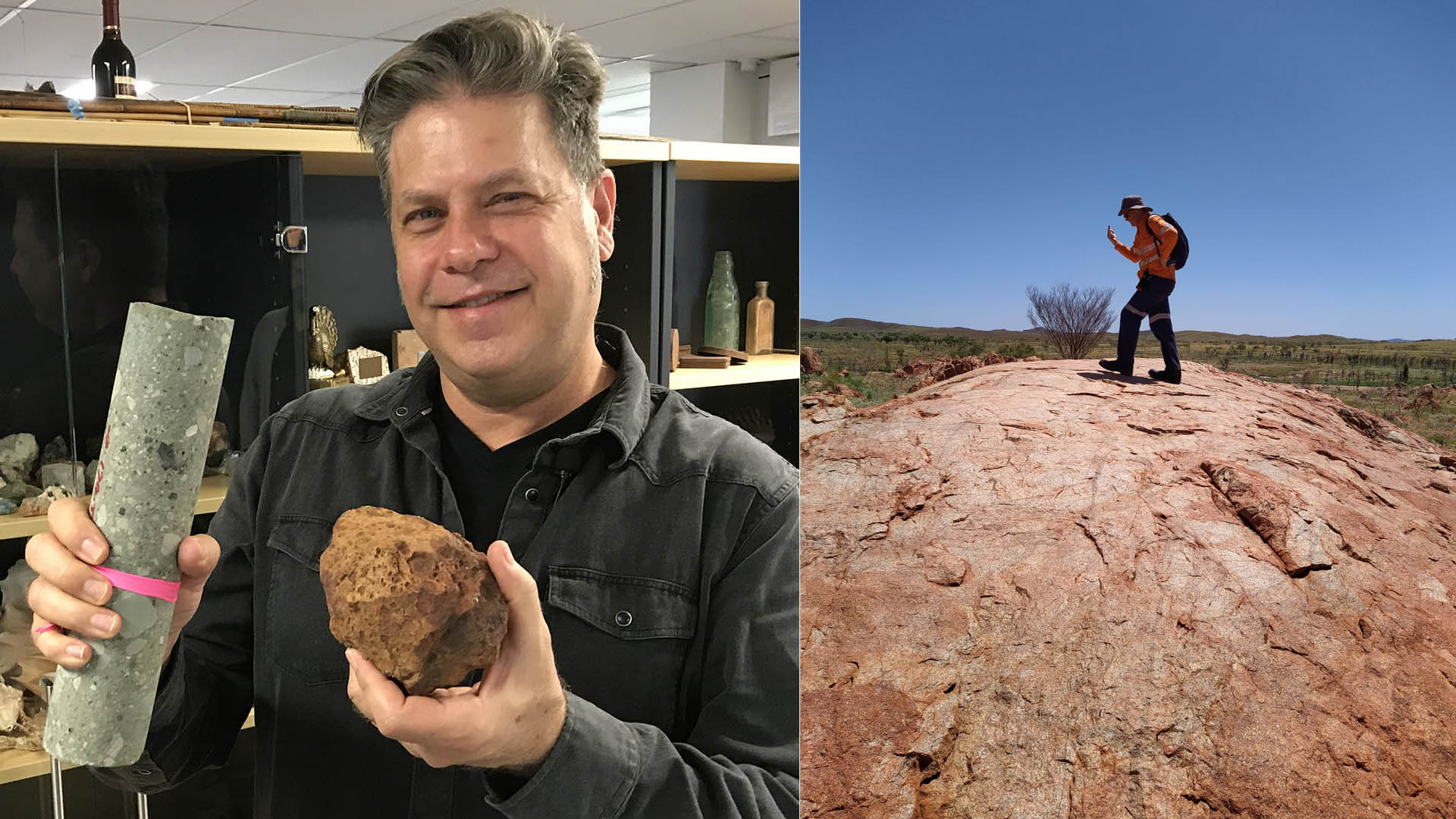 Such was the case in 2020 for a team of geologists from Evolution Mining drilling just outside of the historic town of Ora Banda in WA’s Goldfields.

When drilling based out of Evolution’s Mungari operations produced some unexpected results, the team called in geologist and geophysicist Dr Jayson Meyers. It soon became apparent that what they had stumbled across was far more historically significant than gold mineralised rocks.

The story the drilling results actually hinted at was that of an asteroid, potentially up to 200 metres wide, which likely crashed into the Goldfields around 100 million years ago, producing a crater that is estimated to be about 5 kilometres wide but which has since filled with younger sediments to form a flat landscape.

To put those numbers into perspective, the famous Wolfe Creek Crater in WA’s Kimberley is only about 875 metres in diameter and is thought to have been caused by a meteorite about 15 metres wide.

“They [the Evolution team] had me come out to site because there was already someone suspicious this might have been a meteorite crater,” Meyers explained of the discovery.

“When I got there and started to look at drill core that samples rocks from the sides of the crater, there were rock textures, such as ‘shatter cones’, that could only have come from an asteroid impact or a nuclear blast site. And we know they didn’t do any nuclear testing at Ora Banda.”

The geophysical images that Meyers generated also showed a zone in the centre of the crater structure where shattered rocks may have come to the surface. When the team visited that spot they found shatter cones in exposed rock outcrops.

See also  The Pilbara – beautiful one moment, apocalyptic skies the next

Meyers’ “day job” is as principal consultant and director of Resource Potentials, the Perth-based consulting and contracting business he founded in 2001. He also undertook research and teaching for a decade at Curtin University’s WA School of Mines, where he remains an adjunct professor.

But in recent years Meyers has increasingly become fascinated by and involved in the discovery of new meteorite craters.

Scientists from Curtin, including colleague and meteoric impact expert Dr Aaron Cavosie, are now looking at the Ora Banda crater site at a microscopic level to work out whether the impact happened 40 million years ago (Meyers’ minimum estimate), 250 million years ago (a likely maximum) or somewhere in between.

More specifically, they will look in detail at minerals that were effectively vapourised and then re-crystallised under extremely high pressures when the asteroid slammed into the earth.

“The energy released when the asteroid impacted would have been more than the combined energy from every atomic test ever conducted,” Meyers said.

As context for that comparison, the largest single human-caused explosion ever was the Russian Tsar Bomba, which was detonated over Novaya Zemlya island in the Arctic Ocean in 1961. The flash of the blast was seen 1000 kilometres away, with a mushroom cloud 60 kilometres high and so much heat produced that it was estimated anyone within 100 kilometres would have suffered third-degree burns.

However, the yield of “Big Ivan” was only 50 megatons. The total yield of every nuclear weapons test on record is more than 10 times that!

Immediately after its creation, the Ora Banda crater would likely have been several hundreds metres in depth,  with what Meyers describes as a “nipple-like” protrusion towards the centre where the Earth’s crust bounced back up like a spring (“Think of the crater shape like you’d put a giant donut in the sand and then lifted it back up,” he laughs).

The many millions of years since impact have seen that “bowl” fill up with material to the point that it has become indistinguishable from the largely flat landscape around it.

But the fact the impact zone is no longer visible to the naked eye doesn’t mean we should forget what once happened there, Meyers says.

In fact, he believes recent events should make us even more curious about it.

“It’s a bit like that [virus-themed] movie Contagion,” Meyers said.

“If you’d seen that two years ago, you would have said ‘that’s never going to happen in real life.’ But here we are two years on and a lot of those things are things we’re now actually seeing.

“Same goes for any movie about a tsunami. Until the Boxing Day [2004] event, you would never have thought something like that might happen.”

“Finding something like this should be another step towards helping to understand how often these asteroids do hit the Earth. As a world population I think we probably need to be more unified and vigilant about these things.”

As if to illustrate Meyers’ point, ‘Asteroid 465824’ measuring 160 metres in diameter passed ‘near’ the earth last week – although it’s worth pointing out that in the context of space, this ‘near’ event extended to more than 7 million kilometres away.

Of course, there’s another important question relating to the Ora Banda crater: what effect, if any, would the asteroid impact have had on the gold deposits the Evolution team were originally exploring?

In the case of South Africa’s gold-rich Witwatersand Basin and the associated (and gigantic) Vredefort Crater, there is some evidence that an asteroid impact can assist with both the discovery and deposit quality of gold by bringing rich layers closer to the surface at the central protrusion – although it remains to be seen what the correlation might be at the Mungari tenements.

“The gold [at the drilling site] is about 2.6 billion years old,” Meyers outlined.

“It’s been sitting there for all those years and then this asteroid has impacted and, smashed it around, fractured some of it and moved it around the place.”

Ultimately, whether the drilling site is a mineable resource is a longer-term decision for Evolution.

In the meantime, Meyers is looking forward to where his meteorite crater-hunting adventure will take him next.

Discoveries the size of the one outside Ora Banda remain relatively rare Meyers believes – “you might see one every 20 years” – but he says modern geophysical technology and broader survey coverage funded by mining companies and government agencies is helping to make the discovery of hidden craters more frequent.

The veteran geologist is waiting on scientific verification of the “Meyers Crater” he uncovered at the edge of the WA gold mining town of Coolgardie in 2017, and he has several more potential impact sites he’s planning on drilling when he gets the chance.

For Meyers, it’s a continuation of a curiosity about the earth and how it was formed that has been with him since childhood and which remains as strong as ever.

“Growing up in California, my family used to take trips out to the desert and canyons. I’d see these layers of rock in the sides of hills and it fascinated me,” he explained.

“When I heard that people got paid to look at rocks, I thought straight away: ‘that’s me.’”