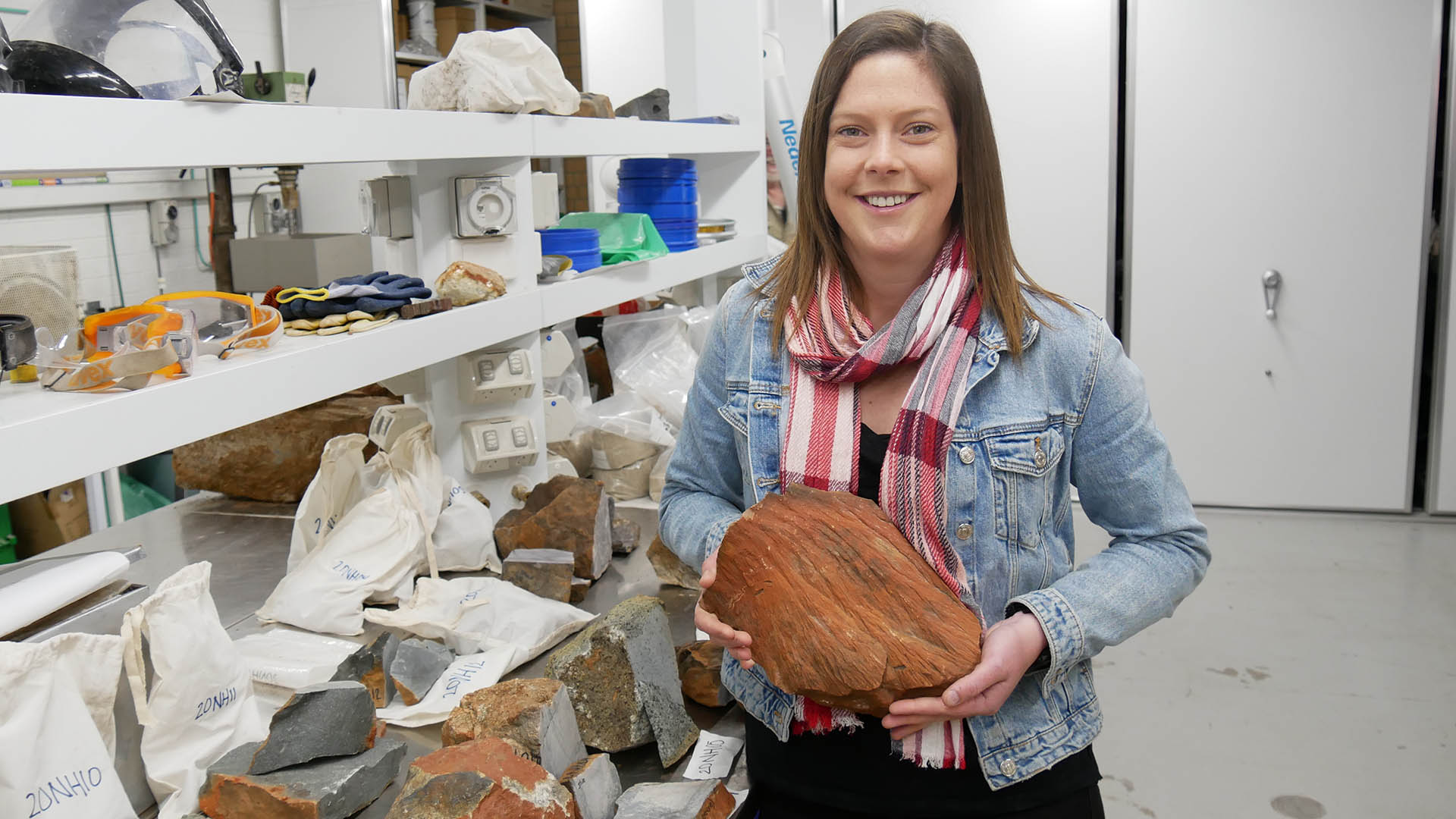 When Curtin University’s Morgan Cox was recognised as WA’s Student Scientist of the Year earlier this month, she might well have reflected on a “sliding doors” moment that helped set her on a path to astronomically significant research.

During the second year of her undergraduate geology degree, Cox was accepted into a mining internship. Had she taken it up, her days might have been devoted to the search for mineral deposits around regional WA.

Instead, she accepted an offer to start conducting her own research and experiments. As a result, she’s now a planetary geologist at Curtin University’s School of Earth and Planetary Sciences and a PhD candidate whose thesis will focus on using big data to help understand the evolution of the earth, and how asteroid bombardments millions or even billions of years ago have influenced that process.

Broken down more simply, Cox’s research involves studying a known asteroid impact site in the giant Woodleigh Crater east of Shark Bay and then determining whether its geological characteristics can help identify other undiscovered craters.

“If you look at the moon or Mars, they have craters that are very easily identified,” Cox explained.

“Earth would look like that too, except for the fact we’ve got plate tectonics and also flowing water which have had an erosional impact over time. So a lot of our craters are hidden and invisible when we look at the modern landscape.

“The possibilities [of planetary geology] are what excites me. We know quite a lot about the earth right now but in the bigger picture, still so little about its evolution.

“Finding out more about that is really cool.”

To illustrate Cox’s point, the Woodleigh Crater – estimated to be between 60km and 120km wide – lay undiscovered until 2000.

A team from Evolution Mining drilling for gold outside Ora Banda recently happened across a potential 5km-wide crater that veteran geologist Jayson Meyers believes was likely formed at least 100 million years ago, while Dr Meyers himself is awaiting scientific verification of an impact site he uncovered near Coolgardie in 2018 and has identified several other “possible” WA craters he plans to drill.

Cox may not have taken the mining internship she was offered, but her research could yet have significant benefits for the resources industry.

Knowing about more asteroid craters and in turn knowing more about them, will lead to a greater understanding of how impact sites can influence the ore deposits found in and around them.

Many of South Africa’s richest gold deposits, for instance, are associated with the 300km-wide Vredefort Crater, formed when an asteroid estimated to be up to 15km in diameter slammed into the earth more than two billion years ago.

Meanwhile, Canada’s Sudbury Basin, created when a similar-sized asteroid struck more than 1.8 billion years ago, is a rich source of copper, nickel, palladium and other valuable metals.

“In WA we’ve got rocks that are quite old and also these world-renowned ore deposits,” Cox said.

“I think there’s high potential to find more significant impact craters across WA and Australia because there’s just so much land out there that we don’t fully understand yet.

“As we find new craters, one of the things that will be exciting is seeing if they are associated with ore deposits.”

Perhaps Cox’s best-known discovery to date has been the reidite she found at the Woodleigh asteroid site two years ago. Reidite is an extremely rare substance formed under high pressure in zircon grains when asteroids from space crash into the earth’s crust, and the 2018 find was only the sixth time it had been located in an impact crater.

Cox also confirmed the Yallalie impact site north of Gingin in 2019, has published research on the dinosaur-killing asteroid Chicxulub impact in Mexico, and in 2016 received the Euguene M Shoemaker Impact Cratering Award from the international Lunar and Planetary Institute.

But she said winning the WA Premier’s Award as ExxonMobil  Student Scientist of the Year (alongside UWA’s Todd Bond) was a particular thrill for her family.

“I wasn’t expecting to win, so I was over the moon,” she said.

“But I think my parents were even more excited than myself. I’ve put in a lot of hard work and long nights and to see me get this award meant a lot for them.”

Cox’s path to becoming a geologist has been a slightly unusual one. A talented goalkeeper, who represented the Northern Territory, South Australia and Western Australia in junior representative soccer, she accepted a college scholarship to play the sport in the US.

At that stage, sports science loomed as a more likely career choice but when Cox returned to Australia she instead decided to explore a long-standing fascination about rocks and the way the earth was formed.

She hopes her journey provides evidence that career decisions don’t always have to be made early.

See also  At one stage there were 2400 people, now there's just a single pub

“For anyone considering [a career in geology] but not really quite sure about it, I’d encourage them to enroll and do a semester and see how they feel about it,” she explained.

“I was fortunate in that I had some professors who were quite inspiring and that helped me get very interested in what I was doing.

“But before that I was travelling around the US for three years playing soccer. There’s no rules and if you don’t know exactly what you want to do, you should explore different directions.”