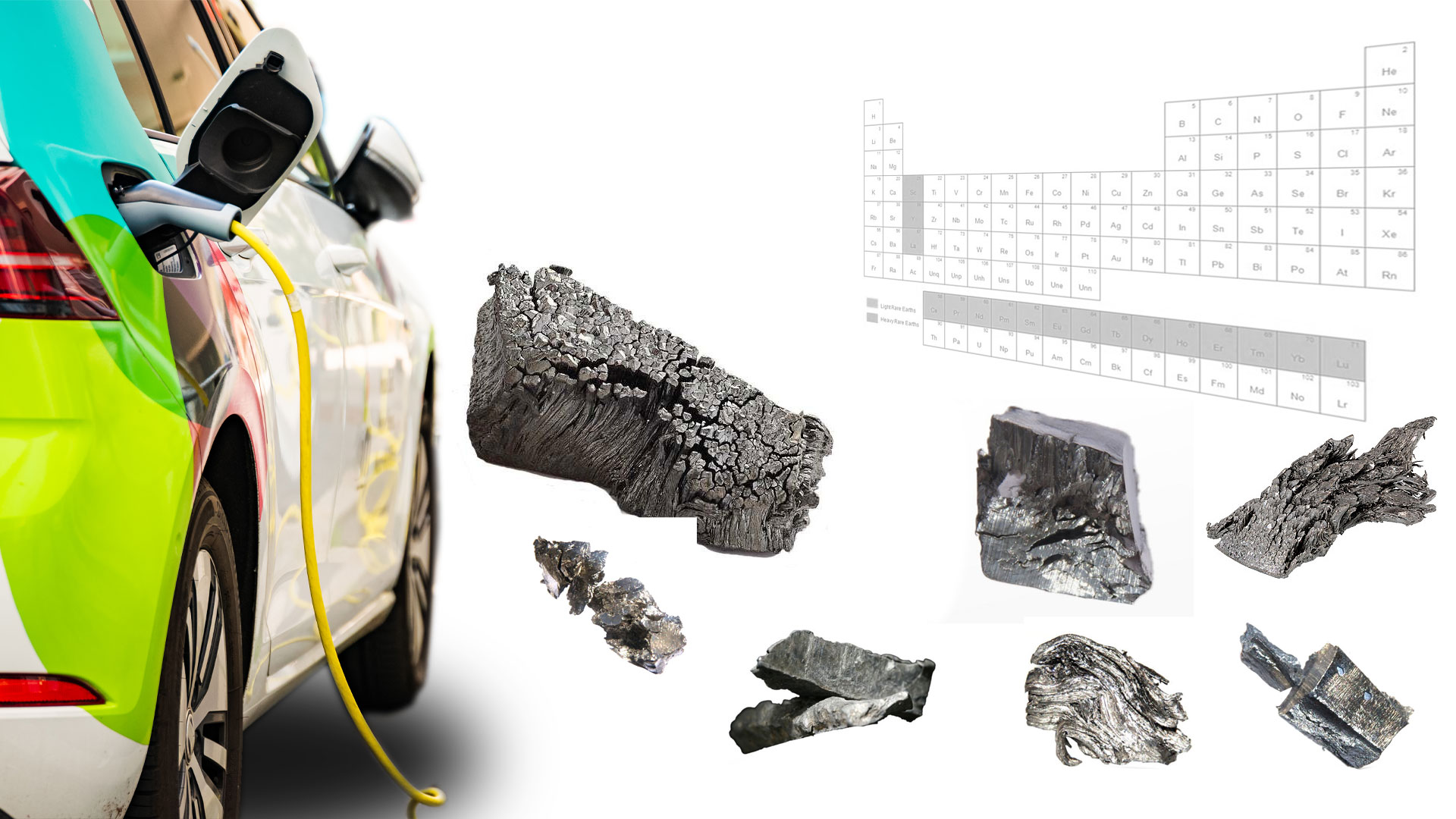 Just as people like to say that common sense can be uncommon, rare earth metals are – paradoxically – not that rare at all.

But their plentiful status in the earth’s crust is counter-balanced by the fact economically exploitable rare earth deposits are hard to find.

Given the use of rare earth metals in important technology such as smartphones, electric cars and weapons guidance systems, this explains why there is such a competitive global race to secure security of supplies for the future.

Cerium (Ce):
Cerium is a soft, ductile and silvery-white metal that tarnishes when exposed to air and is soft enough to be cut with a knife. It takes its name from the dwarf planet Ceres.

Where have I seen it? Cerium is a key component of misch metal, which is used in the manufacturing of cigarette lighters. It is also used in incandescent gas mantles, as a glass polishing agent, as a catalyst in self-cleaning ovens, and in the film industry in carbon arc lighting for studio and projector lights.

Dysprosium (Dy);
Dysprosium is a rare-earth element, which has a bright silver shine. It is quite soft and can be machined without sparking, provided overheating is avoided. Dysprosium has one of the highest magnetic strengths of the elements, especially at low temperatures. It gets its name from the Greek word dysprositos, which means “hard to get.”

Where have I seen it? Dysprosium is used in lasers, lighting, data storage and in permanent magnets in motors, electric vehicles, generators, and wind turbines.

Erbium (Er)
Erbium is a silvery-white solid metal when artificially isolated, natural erbium is always found in chemical combination with other elements. It was originally discovered in Sweden in the 1840s.

Where have I seen it? Erbium oxide gives a pink colour and is been used as a colorant in glasses and porcelain enamel glazes. Erbium isotopes are good neutron absorbers making them suitable for use in nuclear reactor control rods. Erbium is also employed in alloys, especially with vanadium, to decrease the hardness of metals. It can be used in fibre amplifiers for optical communications and in medical and dental lasers.

Europium (Eu)
Europium can be dented with a fingernail and easily cut with a knife. It has to be stored under an inert fluid to protect it from atmospheric oxygen or moisture. When oxidation is removed a shiny-white metal is visible. Europium is one of the rarest of rare earth metals.

See also  Girls get an early, hands-on look at mining at new camp

Where have I seen it? Europium is great at absorbing neutrons, making it valuable in control rods for nuclear reactors. It is also used in making thin super-conducting alloys.

Gadolinium (Gd)
Gadolinium is a silvery-white metal when oxidation is removed. It is only slightly malleable and is a ductile rare-earth element. Gadolinium reacts with atmospheric oxygen or moisture slowly to form a black coating. It is named for Johan Gadolin, who discovered the world’s first rare earth element (Yttrium) in 1792.

Where have I seen it? Gadolinium-yttrium garnets are used in microwave applications and gadolinium compounds are used as phosphors in colour television sets. The metal has superconductive properties – as little as 1 per cent gadolinium improves the workability and resistance of iron, chromium, and related alloys to high temperatures and oxidation.

Holmium (Ho)
No it’s not squeaky cheese! Holmium is a relatively soft and malleable element that is fairly corrosion-resistant and stable in dry air at standard temperature and pressure. In moist air and at higher temperatures, however, it quickly oxidizes, forming a yellowish oxide. In pure form, holmium possesses a metallic, bright silvery lustre. It has the highest magnetic permeability of any element.

Where have I seen it? As a result of its special magnetic properties, holmium is used in alloys for the production of magnets and as a flux concentrator for high magnetic fields. Holmia (holmium oxide) is used as a yellow or red colouring for glass and cubic zirconia.

Lanthanum (La)
Although it is classified as a rare earth element, lanthanum is the 28th most abundant element in the Earth’s crust, almost three times as common as lead. But the extraction process is so complex that pure lanthanum metal was not isolated until 1923. Its name comes from the Ancient Greek word lanthanein, meaning “to lie hidden.”

Where have I seen it? Lanthanum is one of the rare earth elements used to make carbon arc lights which are used in the motion picture industry for studio lighting and projector lights. Lanthanum also makes up about 25 per cent of misch metal, a material used to make flints for lighters.

Lutetium (Lu)
Lutetium is a silvery white metal, which resists corrosion in dry air, but not in moist air. Priority of its discovery in 1907 was disputed by French scientist Georges Urbain, Austrian mineralogist Baron Carl Auer von Welsbach, and American chemist Charles James – with Urbain eventually winning out and naming the element lutecium (later changed to lutetium). Lutetia is the Latin name for Paris.

Where have I seen it?  Because of production difficulty and high price, lutetium has very few commercial uses. Lutetium oxide is used to make catalysts for cracking hydrocarbons in the petrochemical industry. Lutetium is used in cancer therapy and because of its long half-life is also is used to date the age of meteorites.

Neodymium (Nd)
Neodymium is a hard, slightly malleable silvery metal that quickly tarnishes in air and moisture. When oxidized, neodymium reacts quickly to produce pink, purple/blue and yellow compounds. Most of the world’s commercial neodymium is mined in China.

Praseodymium (Pr)
Praseodymium is a soft, silvery, malleable and ductile metal, valued for its magnetic, electrical, chemical, and optical properties. It is too reactive to be found in native form and develops a green oxide coating when exposed to air.

Where have I seen it? Praseodymium is used in a variety of alloys. The high-strength alloy it forms with magnesium is used in aircraft engines. Praseodymium is also used in alloys for permanent magnets and it makes up around 5 per cent of misch metal, which is a key component of the flint in lighters. One of the first commercial uses for praseodymium was as a yellow stain for ceramics.

Promethium (Pm) |
Promethium is named after Promethius, the Titan in Green mythology who stole fire from Mount Olympus and brought it down to humans. It’s extremely rare, with only 500-600 grams of it occurring naturally in the Earth’s crust at any given time.

Where have I seen it? Most promethium is used for research purpose. It can be used as beta radiation source in luminous paint, in nuclear batteries for guided missiles, watches, pacemakers and radios, and as a light source for signals.

Samarium (Sm)
Samarium is a moderately hard silvery metal that slowly oxidises in air. It’s the 40th most common element in the earth’s crust – more common than tin – and China leads the world substantially in samarium mining and production.

Where have I seen it? Samarium is used in powerful samarium-cobalt magnets, which are found in small motors, headphones and high-end pickups for guitars and related musical instruments. Samarium is used to dope (introduce impurities to) calcium chloride crystals for use in optical lasers. It is also used  in infrared absorbing glass and as a neutron absorber in nuclear reactors. Samarium oxide has specialised uses in glass and ceramics.

Scandium (Sc)
Scandium is a silvery-white metallic d-block element, which was not used widely commercially until its potential benefit in alloys was discovered in the 1970s.

Where have I seen it? Scandium is used in aluminium-scandium alloys for aerospace industry components and for sports equipment such as bicycle frames, fishing rods, golf iron shafts and baseball bats. Scandium iodide is used in mercury vapor lamps, which are used to replicate sunlight in studios for the film and television industry.

Terbium (Tb)
Terbium is a silvery-white metal that is malleable, ductile, and soft enough to be cut with a knife. It is a fairly electropositive metal that reacts with water, evolving hydrogen gas. The richest commercial sources of terbium are the ion-adsorption clays of Southern China.

Where have I seen it? Terbium is used to dope calcium fluoride, calcium tungstate and strontium molybdate, all used in solid-state electronic devices. It is also used in low-energy lightbulbs and mercury lamps. Terbium oxide is used in green phosphors in fluorescent lamps and colour TV tubes.

Thulium (Tm)
Thulium has a bright silvery-gray lustre and can be cut by a knife. It is the least abundant of the rare earths and slowly tarnishes in air, but its metal is easy to work and more resistant to oxidation than most rare-earth elements. Thulium dust and powder are toxic upon inhalation or ingestion and can cause explosions.

Where have I seen it? Thulium has a half-life of 128 days and is used as a portable source of X-rays. It is also used to dope yttrium-aluminium garnets (YAG) used in lasers. Thulium can be used in alloys with other rare earth metals and one of its most interesting roles is in Euro banknotes, where its blue fluorescence under UV light helps defeat counterfeiters.

Ytterbium (Yb)
Ytterbium is a soft, malleable and ductile chemical element that displays a bright silvery lustre when pure. It is a rare earth element, and it is readily dissolved by the strong mineral acids. It reacts slowly with cold water and it oxidizses slowly in air.

Where have I seen it? Atomic clocks based on ytterbium atoms set new records for stability, performing about 10 times better than other such clocks. But generally ytterbium has few uses. It can be alloyed with stainless steel to improve some of its mechanical properties and used as a doping agent in fibre optic cable where it can be used as an amplifier. One of ytterbium’s isotopes is being considered as a radiation source for portable X-ray machines.

Yttrium (Y)
Yttrium is a silvery-metallic transition metal which is never found in nature as a free element. Yttrium barium copper oxide was the second material found to achieve high-temperature superconductivity and the first to achieve this above the boiling point of nitrogen. Exposure to yttrium compounds can cause lung disease in humans.

Where have I seen it? Yttrium is often used as an additive in alloys. It increases the strength of aluminium and magnesium alloys. It is also used in the making of microwave filters for radar and has been used as a catalyst in ethene polymerisation. Yttrium is used in small quantities in some lithium iron phosphate batteries, while yttrium-aluminium garnet (YAG) is used in lasers that can cut through metals.