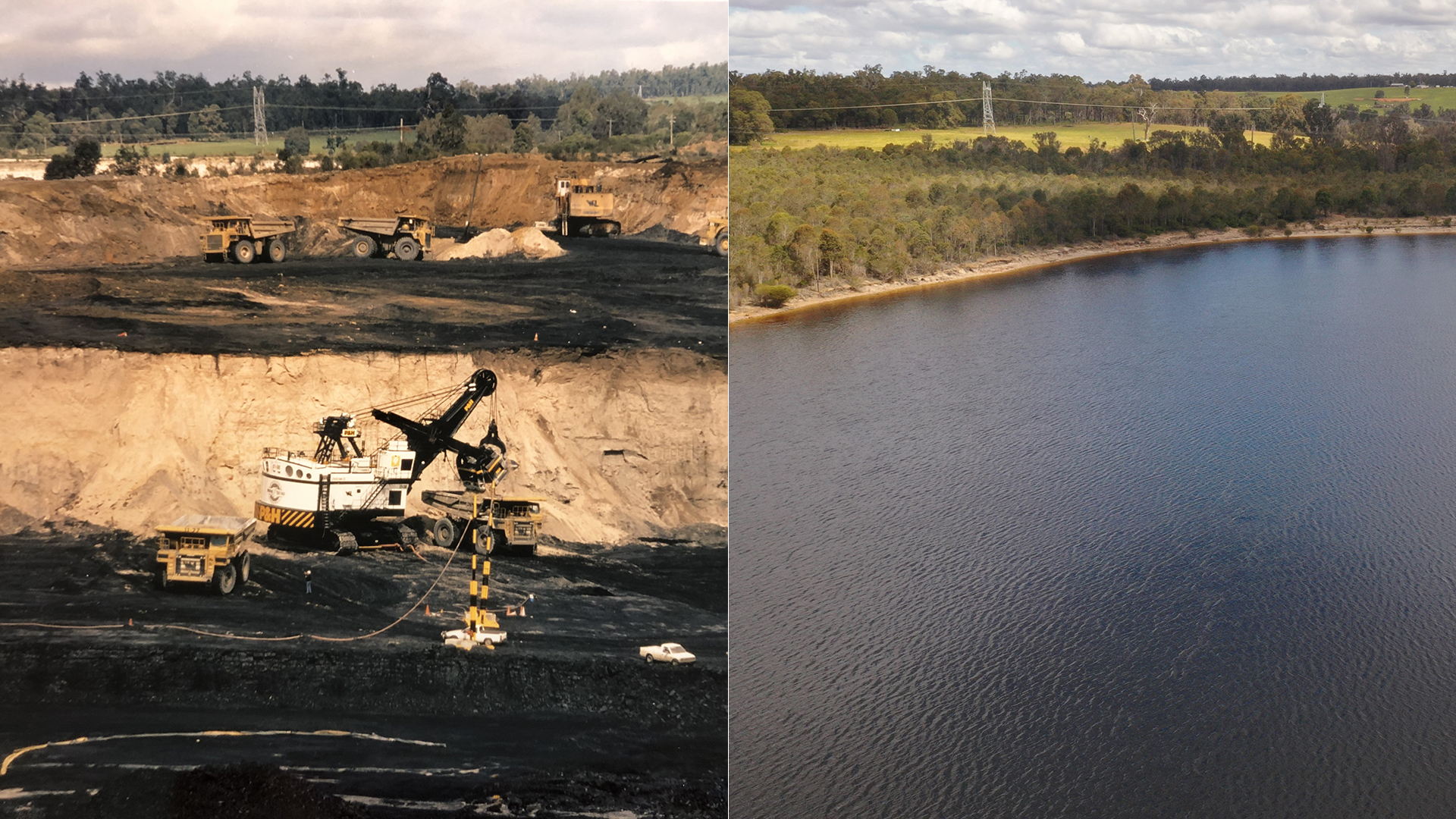 A little more than two hours south-east of Perth, a touch more than 15 minutes’ drive from main street of Collie, lies an aquatic attraction that promises to become one of WA’s finest.

Lake Kepwari covers the best part of 100 hectares, which for footy fans translates to more than 55 times the playing surface of Optus Stadium. Locals say it contains plenty of fish and marron and, in keeping with its name – Kepwari is a Noongar word that translates to ‘playing with water’ – the lake is also perfect for water skiing, canoeing, kayaking, swimming and pretty much any other kind of water sport you can think of.

Lake Kepwari was also, until a little less than 25 years ago, an operational coal mine. The contradiction between what the site was then and what it is now is visually stunning, not least for the workers who once spent their days extracting coal from the open cut mine known as Western Five.

“This is absolutely fantastic, it’s been a great transformation,” Rob Sanford says.

“After seeing the hole in the ground that was here, this is absolutely superb.”

Production Trainer Sanford is just one of a strong core group of one-time Western Five workers who are still employed by the former mine’s operator Premier Coal.

It’s easy to understand how they might stand on the shores of Lake Kepwari, look over the water, cast their minds back to the machinery, workshops and hard yakka of days gone by and think “how did we get here?”

The short answer is that it’s been a long story.

When Lake Kepwari officially opened to the public on Thursday it marked the culmination of a journey that was the best part of 25 years in the making.

The mine itself closed in 1996. Plans to turn the site into a water sports facility gained traction in the decade that followed and in August 2008, the then-Minister for the South West – a bloke named Mark McGowan! – announced that he hoped Lake Kepwari would be open in time for the summer.

But rehabilitating a mine to the point that it can be relinquished to the government and then made freely accessible to the wider public is an extremely complex task, and along the way there have been a myriad of environmental, legal and logistical challenges to overcome.

Member for Collie-Preston Mick Murray has been one of the staunchest advocates for Lake Kepwari. Murray, a former coal mine worker who will leave State Parliament in March after more than 20 years, says the lake’s opening is both exciting news and something of a relief.

“It’s the monkey off my back – to say the least,” Murray said.

“I made a bold promise that it would be open quite early but it’s taken a while. The government has invested over $5 million in this area and I appreciate that.

“The lake itself is world class, absolutely top of the range when it comes to ski areas and water sports.

“There have been enquiries from all over Australia about running events here. It will be a huge boon to the tourist industry in Collie.”

While the recreational aspects of the lake will be world class, so too is the rehabilitation job.

Premier Coal has relinquished 220 hectares in total, 120 hectares of which is revegetated land around the lake. In addition to the fish and marron, the ecosystem supports ducks, swans and variety of bird life, reptiles and mammals.

The Collie River, which was originally diverted around the mine site, has now returned to its original path and flows through the lake (an unexpected river breach in 2011 prompted a re-think of the original closure strategy, with the flow-through solution requiring lengthy and detailed water quality testing).

Premier Coal Environmental Superintendent Emily Evans says the project goes far beyond the most basic aims of rehabilitation, which are to create safe and stable land forms.

“We’ve been able to create a space that can have a future land use of recreation, which is really exciting,” Evans said.

“The surrender of a rehabilitated mining area is very rare, in Australia and in Western Australia. There are plenty of mines with rehabilitation in place but very few where that rehabilitation has been accepted by government and the area has been surrendered out of mining tenements.

“We’re one of the first mining companies to have done that and we’re pretty proud of that. It’s an exciting space to be in.”

Operations Manager Jim Falconer says that sense of pride extends to Yancoal, which operates Premier Coal’s mines and is one of Australia’s largest coal companies, and strongly believes that Lake Kepwari should serve as a global example of what can be achieved with mine sites after their closure.

“From a world’s best practice perspective, this would be right up there amongst the elite,” Falconer said.

“I don’t think there would be too many other places anywhere in the world that would have such a high standard to be able to hand over to a community for a recreational facility.

“I’d like to think Lake Kepwari is a legacy of the effort that we’ve put in. You can actually run [a site] as an active mine and then also turn it into an amazing recreational facility.

“And it will be like that for years to come.”

If you build it, they will come

Of course, it’s one thing to produce a facility like Lake Kepwari and another thing to have communities – both local and beyond – embrace it.

But all signs are that Lake Kepwari will be busy from the early days of its opening and for a long time to follow.

“It’s so excellent for us to as a mining company to be able to give back to the community that’s given so much to us,” Premier Coal’s Community Superintendent Ziedonis Rijkuris explains.

“To be able to diversify Collie’s economy and provide a facility that can generate income for the community outside of the coal mining and the power industries is going to be exceptionally useful for the generations to come.

“To provide not just recreational facilities but the ability for different people to start up businesses and generate incomes that will provide funding for the community is just too valuable to measure.”

For more information on Lake Kepwari, visit: the DPAW website.