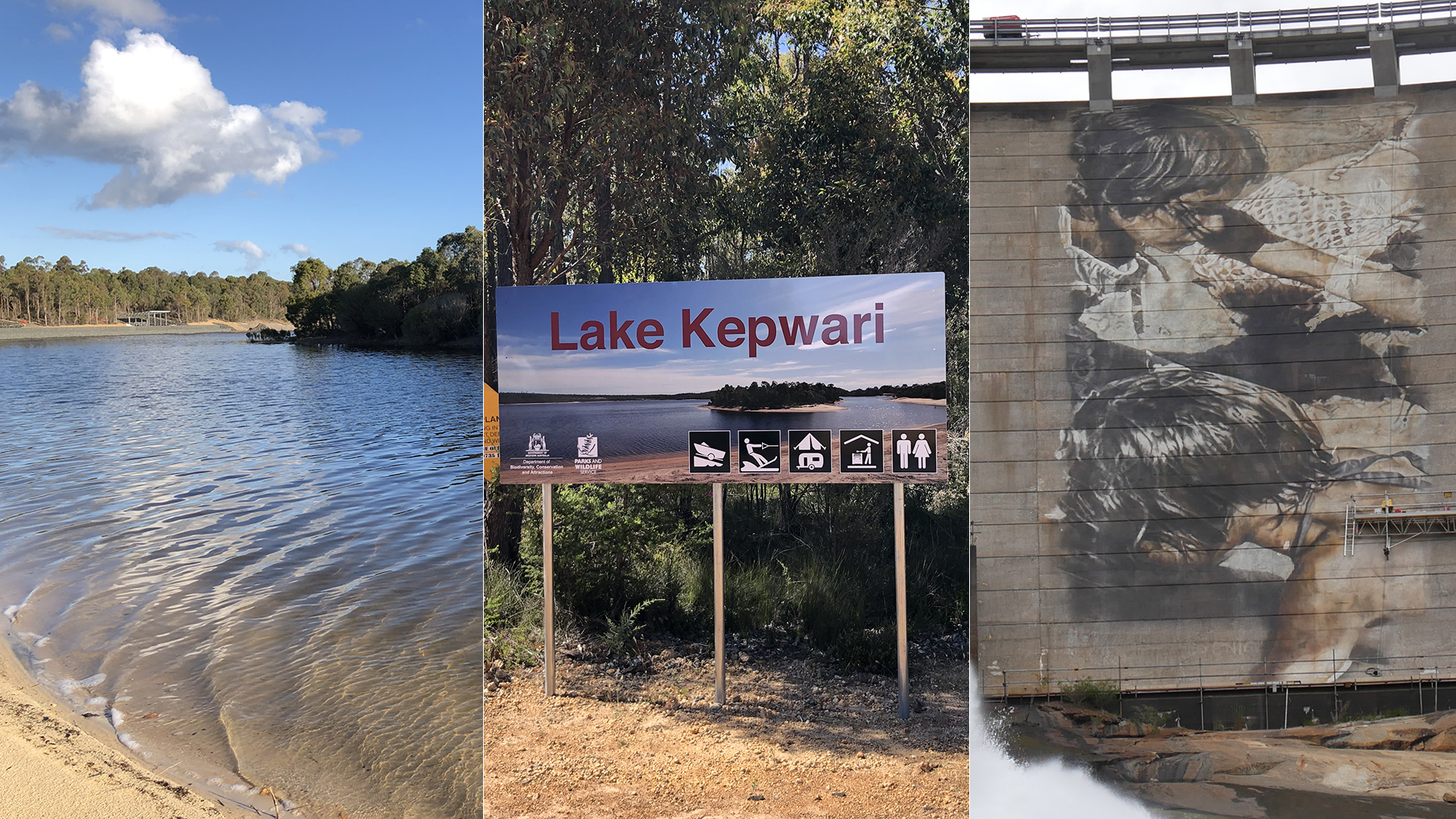 For the best part of 140 years, the WA country town of Collie has been inextricably linked with traditional industries: coal mining, power generation and, to a lesser extent, farming.

Those industries still have significant roles to play – Premier Coal and Griffin Coal remain two of the town’s biggest employers – but over the past few years the Collie economy has steadily started to diversify.

That diversification is underscored by the WA Government’s recently announced Just Transition program for Collie and exemplified by new tourism opportunities increasingly finding a foothold in the region.

Visitors in recent months couldn’t have missed the town’s new mural trail, which has seen striking artwork popup on buildings – depicting Collie’s history, Aboriginal culture and the surrounding natural environment. The trail’s centrepiece will lie at nearby Wellington Dam, where world-renowned artist Guido van Helten is currently working on a painting that will eventually cover a massive 8000 square metres.

Wellington Dam, of course, is just one of several bodies of water in Collie that have been drawing tourists for decades, alongside Minninup Pool, Honeymoon Pool, Stockton Lake and Black Diamond Lake.

Last week they were officially joined by what promises to be the jewel in Collie tourism’s crown, when Lake Kepwari finally opened after years of anticipation.

As Shire Deputy President Ian Miffling explains, Collie has designs on being known as the “Lakes District of WA.”

“For the Collie community, the opening of Lake Kepwari is one of the most exciting things that has happened in a long time,” Miffling said.

“It opens up all sorts of opportunities for the commercial sector and for the recreational sector, in terms of visitors to town and their spending potential.

See also  How much food do you need to keep a mining camp going?

“I have said on many occasions that the lake is located in the correct position, meaning people have to come to town to get to it.

“The future is really great in terms of our tourism and what it’s going to bring for local businesses, they are all going to flourish because of it.

“It’s one of those things where the potential is exponential – for food, the accommodation, the recreational shops that we’ve got in town and the cycle shops.”

Lake Kepwari is a very different proposition to Stockton Lake and Black Diamond Lake, two other former coal mines which were abandoned in the 1950s and have since filled with water and become recreational attractions.

Closed for mining in 1996, Lake Kepwari had been earmarked as a future aquatic playground for the best part of two decades. It’s taken this long to come to fruition because of the painstaking rehabilitation job undertaken by Premier Coal and sponsored by Yancoal on behalf of Premier’s owners.

This has resulted in Lake Kepwari becoming one of the very few former mine sites to be relinquished to the WA Government and taken out of mine tenements.

A WA Government investment of more than $5 million has allowed Lake Kepwari to launch with high-quality road access, a dual lane boat ramp and jetty, covered picnic and barbecue areas, an impressive amount of cark parks (85 bays for boat trailers and 65 for cars) and brand new camping sites.

The lake itself is tailor-made for swimming, kayaking, stand-up paddleboarding, water skiiing, fishing and marron catching.

The timing of its opening couldn’t be any better for Simone Fraser, who launched her business TraaVerse in early 2019.

“It’s an opportunity to showcase all the lakes in Collie – but I think Lake Kepwari is going to be one of the gems in town,” Fraser said.

“There’s so much space here [at Kepwari] for people to hire a kayak or a stand-up paddleboard and explore the area and the lake.

“It will be amazing for Collie, bringing people through town and out to the other side of Collie on the east, which is a little bit untapped.

“I’ll definitely be trying to sneak out here early morning before the crowds.”

Over the past four years the State Government has injected $78 million into the Collie Future Fund and the Collie Industry Attraction and Development Fund, which are aimed at driving economic diversity and job creation in the town.

John Kearney has some unique perspective around the transformation of both Lake Kepwari and Collie.

He worked at the Lake Kepwari site as an electrician, back when it was an operational mine known as Western Five. These days he’s a Senior Project Officer with the Department of Premier and Cabinet’s Collie Delivery Unit, which oversees and promotes activities and initiatives that support the future prosperity of Collie.

“Lake Kepwari is going to be a great boost to the local economy,” Kearney said.

“In conjunction with the other commitments around town, such as the adventure trails, the art murals and the money spent on tourism roads, we think the lake will really complement tourism.

“We believe it will be two-fold. The locals now have got a beautiful spot in their own backyard to come for relaxation and recreational water sport. Even if you don’t have a boat, there are great barbecue facilities.

“There’s also the addition of an influx of tourists. Naturally we’re anticipating those tourists who come to town are going to have a spend, which will have a knock-on effect to local businesses in the town.”

But it isn’t only existing businesses that stand to benefit from Lake Kepwari.

Collie Chamber of Commerce and Industry Vice President Julie Hillier expects crowds at Lake Kepwari to attract some new commercial offerings, including the potential for pop-up food and drink options on its shores.

“There’s a real buzz in town, there’s a buzz across the region and we’re seeing a buzz on social media as well,” Hillier said.

“There have been a number of businesses that have been involved at Lake Kepwari with rehabilitation and landscaping, the fabrication work and the earth and civil works. That’s already generated economic benefits for our community.

“As tourists start to visit town, then there will be direct tourism benefits. It’s an opportunity for our current business community to look at diversifying and having a presence out there.

“For businesses that are thinking of coming to Collie and investing in Collie, there are some really innovative opportunities that are being discussed.”

The opportunity for a tourism boom and spin-off economic benefits are music to the ears of Operations Manager Jim Falconer and his team at Premier Coal, who have been working tirelessly for two decades to make Lake Kepwari a reality.

“From a tourism point of view, Collie will certainly be very active going forward,” Falconer said.

“There’s already been enormous interest in the lake…and I think it would be like that for many years to come.”

For more information on Lake Kepwari, visit: the DPAW website.