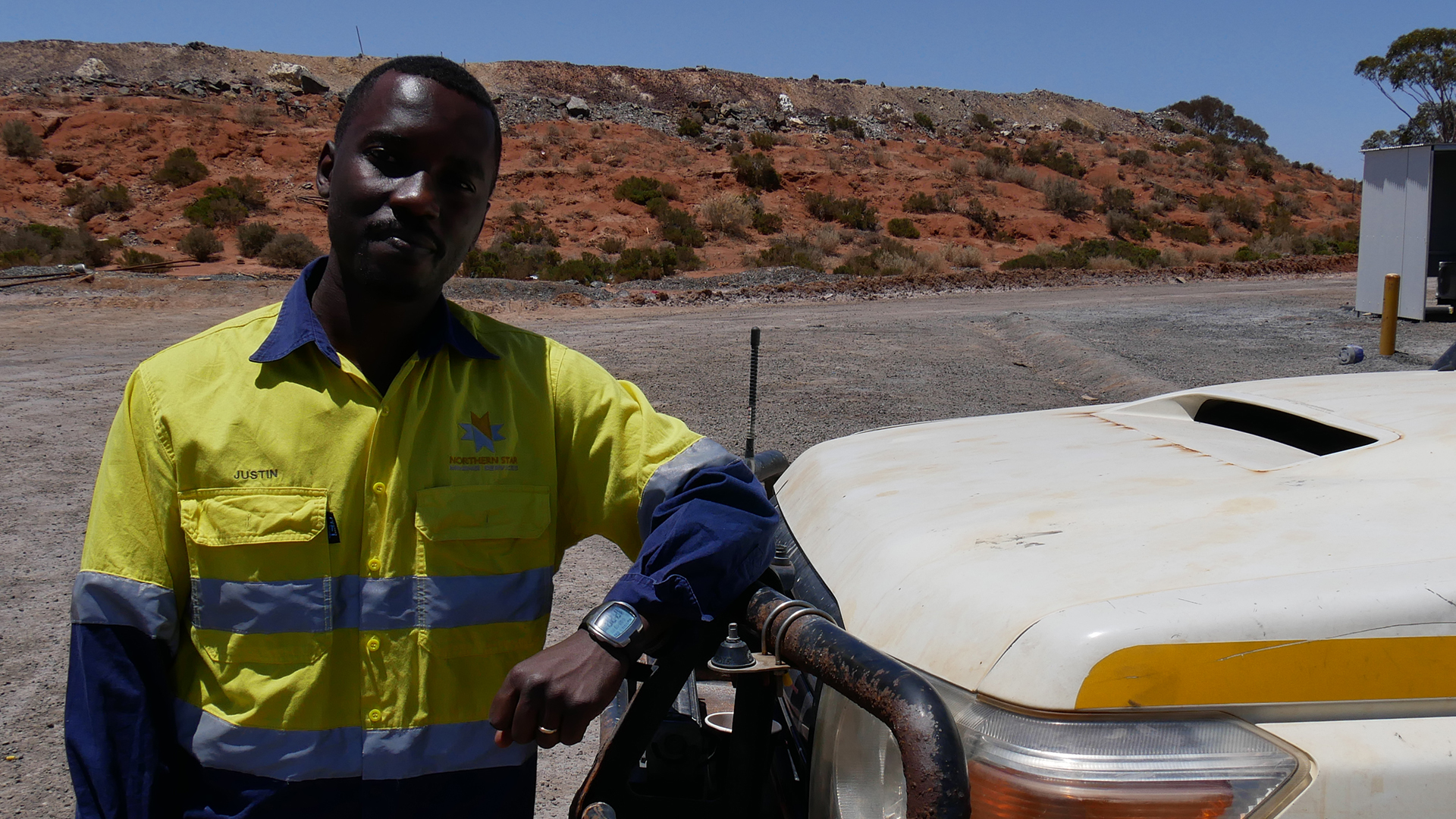 Ask Justin Zimama what being involved in the Goldfields Migrant Employment Program (GMEP) has meant to him and the answer is unequivocal.

“When I moved here [to Kalgoorlie-Boulder], I had no one, so the program was pretty much like an extended family to me,” Zimama reflects.

“The work they do is above and beyond. They will take you shopping and show you around.

“It’s an extra service and not just about a job or getting employment…it’s really like a small family.

“We got together for the anniversary of the program and I was one of the few that got to cut the cake. I didn’t know I was that important but they said ‘Justin you should cut the cake, you were one of the first in this program’.”

Zimama’s back story will be a familiar one for many migrants and refugees who leave uncertainty in their home countries to seek out better opportunities and security in Australia.

Originally from war-torn South Sudan, he spent 10 years in Uganda before migrating at the age of 15 to Brisbane, where he completed high school and then a university degree in human services.

But full-time job opportunities in his chosen field proved extremely hard to come by, both in Queensland and then after he moved to Perth where his sister was living.

“It’s frustrating and it’s not only me that has gone through this journey,” he explained.

“I have a number of colleagues who have had similar experiences, worked hard to get a degree and then ended up just struggling to get by.

“I had to couch surf a bit before I came to WA just to save a bit of money.”

These days Zimama views his shift to WA as turning point – primarily because it led to a move to the Goldfields as part of the GMEP, which then opened up opportunities for him with high-profile gold producer Northern Star.

After starting out as an entry level truck operator, Zimama is now a surveying assistant at Northern Star’s Millennium project.

The Goldfields-Esperance region has long been sensitive to labour market pressures, with its worker and skills shortages across a variety of sectors brought into even stronger focus during the COVID-19 pandemic.

The GMEP developed after Minister for Regional Development Alannah MacTiernan – in recognition of the potential opportunities presented by secondary migration to the Goldfields – reached out to the Goldfields-Esperance Development Commission (GEDC) to explore ways to promote the region to migrants in metropolitan areas.

With support from Perth’s South Sudanese community, an employment expo was held in Perth and attended by 120 people. Zimama first heard about the Goldfields through that event and was later linked to Northern Star for initial employment with settlement support through the Goldfields Community Legal Centre-administered GMEP.

Funded by WA Government Regional Economic Development grants, the GLCL is working to attract Perth-based migrants to the Goldfields and connect them with job opportunities.

MacTiernan announced in November 2020, the commitment of a further $300,000 towards the program.

“The Goldfields Migrant Employment Program is a fantastic initiative that provides a pathway to employment and a new life in the regions, while addressing local labour needs,” MacTiernan said after a visit to Kalgoorlie-Boulder.

“Once awareness of regional job opportunities grow and more people gain employment, other migrants will be inspired and motivated to make the move and enjoy the benefits of regional living.”

To date more than 50 migrants have used the GMEP to find work in the mining sector and beyond.

“We have 11 candidates who have managed to get roles directly with mining companies,” GCLC-based project manager Blessings Masuku said.

“But there are also companies that service mining sites which have employed a majority of our candidates.

“Most of our candidates have been hired by laboratories, which in turn has given them the opportunity to start networking within the community and learn more about mining roles.

“Most of them have managed to grow and get further tickets and are now doing entry level roles on mine sites.

“[The program] has opened eyes, even for those who came through not knowing anything about the mining industry.”

But the GMEP is also providing something beyond pure employment, GCLC manager Effie Harris explains.

“These migrants have been in Perth for quite some time, unable to find work and have probably become quite negative because they’ve come from traumatic backgrounds,” Harris said.

“From what I’m seeing, they are happy to be in a place of this size. They are happy for people who smile back at them.

“They are little things but they are things that make them feel welcome and wanted.”

Both Masuku and Harris believe the program has more scope for growth through forging stronger links with – and potentially sourcing funding from – mining operations based in the region.

Zimama, meanwhile, now very happily calls Kalgoorlie-Boulder home after knowing next to nothing about the Goldfields town only a couple of years ago.

“To be honest I Googled it [before moving] and the most important thing I could hear or read was that it was a place to start my career,” he said.

“The Goldfields itself, I didn’t know what that meant. But coming here I’ve realised that everything is about gold.

“I literally came here blank but the package that was advertised [through the GMEP] gave me the confidence to pack up and move.”

Zimama has since been joined in Kalgoorlie-Boulder by his wife and daughter. He loves his career in mining but also retains a strong drive for community work, the vocation he initially had in mind when embarking on his university studies.

He’s hopeful there may eventually be opportunities to combine those two passions.

“That’s my holy grail – finding a way to marry them,” Zimama said.