A big blue reminder of the importance of mental health 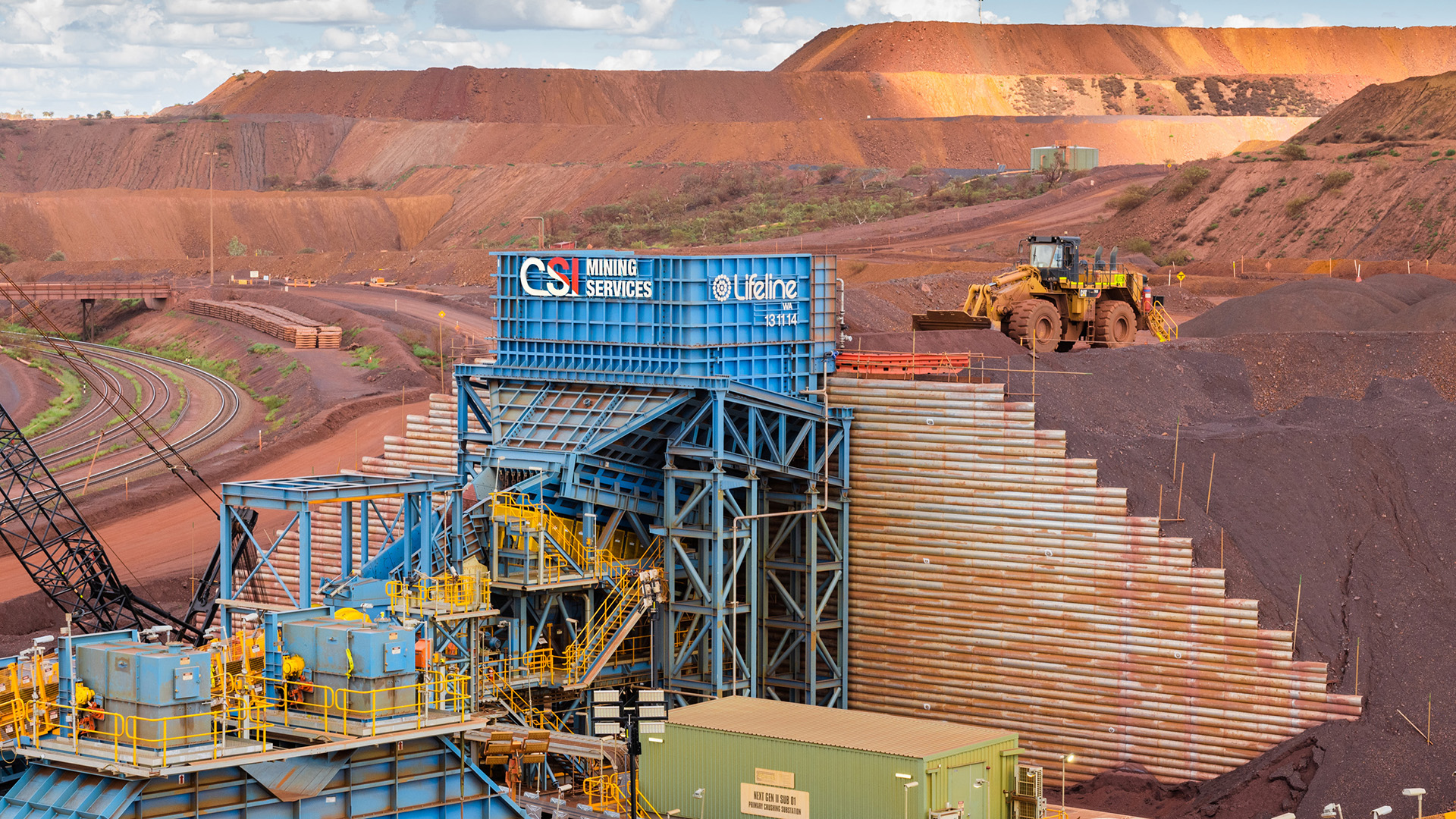 The team at Mount Whaleback iron ore mine in the Pilbara have a constant reminder of the importance of mental health – it’s big, it’s blue and it’s come a bloody long way to get there.

The NextGen 2 crushing plant installed and operated at Mount Whaleback by Mineral Resources subsidiary CSI Mining Services started out life in Turkey, before undertaking a 16,281-kilometre voyage by sea to Kwinana, where more than 290 modules were pre-assembled over six weeks ahead of its trip to the Pilbara.

More than 100 semi-trailers were required to transport the crusher modules to Mount Whaleback over four weeks, which speaks volumes to the complex logistical undertaking when moving multiple pieces of equipment that weigh around 1400 tonnes in total.

But the impressive nature of that feat is only part of the crusher’s story. Painted blue to highlight mental health awareness, it stands out like a beacon amid the red dirt on site and will form a key play of an ongoing partnership between CSI and Lifeline WA.

The idea for the blue paint job actually came from the CSI team in late 2019, to promote Lifeline WA’s Crisis Support Services, in a quirk of timing that was to prove remarkably prescient.

“After the decision to brand the crusher and paint it blue, COVID hit – which brought about an increased focus on mental health,” Mike Grey, Mineral Resources’ Chief Executive – Mining Services, explained.

“Chris Harris, a psychologist, had joined our team and we were looking at ways to not only increase support for our people but work with them to look out for each other, as early intervention is the key.

“Lifeline were approached to see if they wanted to participate in the initiative including having their logo on a prominent location – and they jumped at the chance.”

At that stage there was no formal partnership with Lifeline WA but it soon became apparent there were some significant synergies between what the mental health advocacy group hoped to achieve and the messages CSI wanted to convey to both its workforce and the wider community.

By the time the crusher started making its way north from Kwinana a formal three-year partnership was in place, under which Lifeline WA will deliver training sessions to Mineral Resources staff in Perth and on-site around a number of issues, including mental health first aid and accidental counsellor training.

The journey to Mount Whaleback also became an important tool to help raise awareness of suicide prevention, with Harris (Mineral Resources’ Head of Mental Health) speaking at community events at regional towns along the way.

Suicide rates in remote communities are nearly double those of capital cities.

“Resilience is about the capacity of individuals, their families and their communities to negotiate culturally meaningful ways to share resources that support wellbeing.”

The blue NextGen 2 crusher crushed its first ore in February and will have capacity of 15 million tonnes per annum.

The blue crusher is one of a number of mental health-focused initiatives being undertaken by the mining and resources sector around WA, particularly in light of the impact of the COVID-19 pandemic.

The Chamber of Minerals and Energy of WA has partnered with Lifeline WA on A Resourceful Life, a YouTube series addressing mental health in mining, and Resourceful Minds, a peer-support program for which a pilot is set to launch later this year.

And companies like Alcoa are painting worksite objects in ‘Lifeline blue’ to keep mental health front of mind and encourage people to speak up.