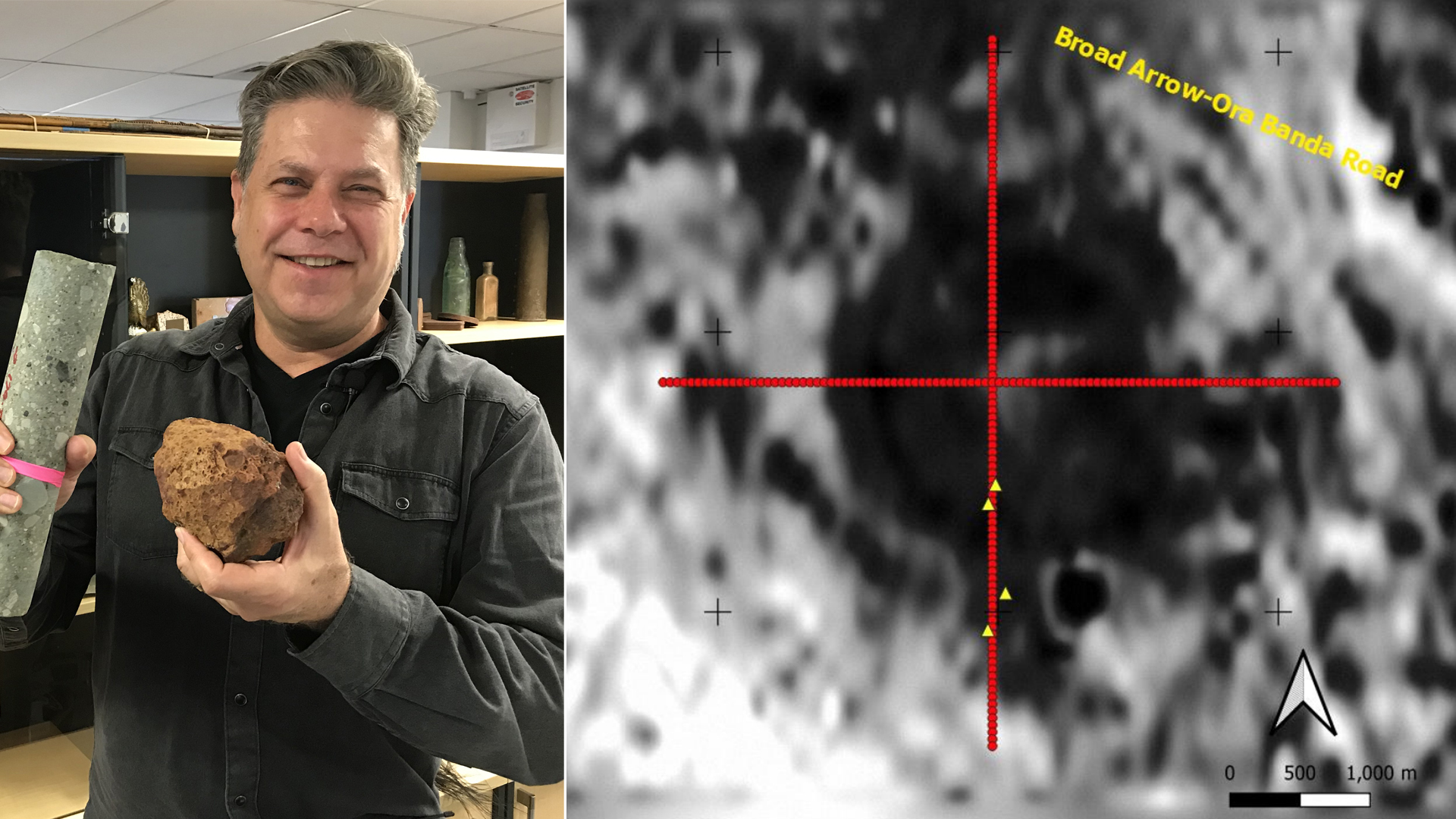 Jayson Meyers knew in his heart that he’d happened upon something pretty special – now he also has a first step towards the independent scientific verification required to back those feelings up.

Meyers, you might recall, is the veteran WA geophysicist and part-time crater hunter, who was called in last year after a team of Evolution Mining geologists drilling for gold outside of Ora Banda noticed some unusual results in their drill cores.

At the time, Meyers hypothesised they were likely the product of an asteroid up to 200 metres wide, which had smashed into the Goldfields tens of millions of years ago and produced a crater of around 5km in diameter that had since filled with sediment to form a flat landscape.

“All the indicators were strong [of an asteroid impact] but I didn’t get a lot of proof until we got the shatter cones caused by impact, not only in the core sample but out in the field, in the centre of the crater where the rock was outcropping just a bit,” Meyers said.

“Then I got the researcher from Curtin involved. He’s naturally very skeptical, even when he’s out there standing on the evidence – which, of course, he has to be because he wants to be 100 per cent sure, there are specific criteria he has to satisfy and it’s a very competitive space.

“But now he’s convinced as well.”

The researcher in question is Dr Aaron Cavosie, a geologist, geochemists and planetary geologist, who is a research fellow at Curtin’s School of Earth and Planetary Sciences.

Cavosie is more circumspect than Meyers, pointing out that research into the Ora Banda site is ongoing, that once completed this research will then be subject to rigorous peer review, and that he knows of enough cautionary scientific tales to not get ahead of the data.

See also  'Talk to me in algebra': the data expert shaping a new generation of miners

“Describing an initial find to the media is a bit like a honeymoon, all fast and flashy, whereas documenting the evidence at a level needed to withstand scientific scrutiny is more like a marriage, where all the hard work happens,” Cavosie said.

But Cavosie and his PhD student and lead author Raiza Quintero felt confident enough to submit an abstract to the 52nd annual Lunar and Planetary Sciences Conference in March, outlining developments at Ora Banda to date.

“We propose that the presence of shatter cones provides compelling evidence for a hypervelocity impact origin for the Ora Banda structure,” the abstract read.

“In addition to ongoing work to confirm the presence of shocked quartz, we are currently working on many other aspects of Ora Banda rocks, including documenting the presence of other shocked minerals, determining if melt is present in the breccia, determination of impact age, and other investigations.”

Shocked quartz – where the crystalline structure is deformed as a result of a high-pressure event – has long been viewed as a telltale indicator of asteroid impacts.

Indeed, it was partly the discovery of shocked quartz that pointed towards the extinction of dinosaurs being caused by a massive asteroid ploughing into Mexico’s Yucatan Peninsula some 65 million years ago.

Meyers is optimistic the Ora Banda impact could be significantly older than that.

“We went out to [Ora Banda] and collected the top part of the core, where there’s sediment that would have filled the crater and gave it to some paleontologists from UWA to look at,” he said.

“They analysed microscopic pollen and spores from plants that was in the sediment, and also something called dinoflagellates – which is not a fart, by the way, it’s small type of fossil left behind by algae!

“As soon as the hole was created those sediments would have started to fill it, and all indications are that they are from the early Cretaceous Period, when dinosaurs were still roaming.

“So we’re talking about an asteroid that hit roughly 130 million years ago.”

While palaentological analysis contiunues, Meyers has also used technology known as passive seismic to get an indication of what the Ora Banda crater would look like with tens of millions of years of filling material removed.

The results pleasantly surprised even him.

“Basically you put a little box on the ground, leave it for 20 minutes, pick it up and move it and it measures the thickness of soft rock over hard rock,” Meyers said.

“The cross section from the passive seismic looked absolutely identical to the text-book cross-section for a complex crater, with a nipple-like protrusion towards its centre.

“It was only two of us out there collecting that data over two days, so that was really a ‘wow’ moment.”

With mineral exploration in WA currently at levels unseen for the much of the previous decade, Meyers believes there could be more Ora Banda discoveries waiting to happen – provided people know what they are looking at.

“I’d really like to get the message to the mining and exploration community that when they are out looking for mineral deposits, especially in greenfields space, they are going into areas that are flat and covered and we don’t really know what’s under there,” he said.”

“But geophysical technology allows us to get images of the subsurface and see these circular features [like impact craters] that are invisible on Google Earth because they are buried.

“Explorers are the ones who are going to find these things, because they have the information at their fingertips.

“I worry that if someone like me isn’t going around beating the drum and telling them what to look for, then they just aren’t going to be recognised.

“And I really do think they need to be recognised, because apart from things like COVID and nuclear war, asteroid impacts have the ability to wipe out the human race.

“We need to understand more about what’s out there, how often these things might impact our planet and what the consequences would be.”