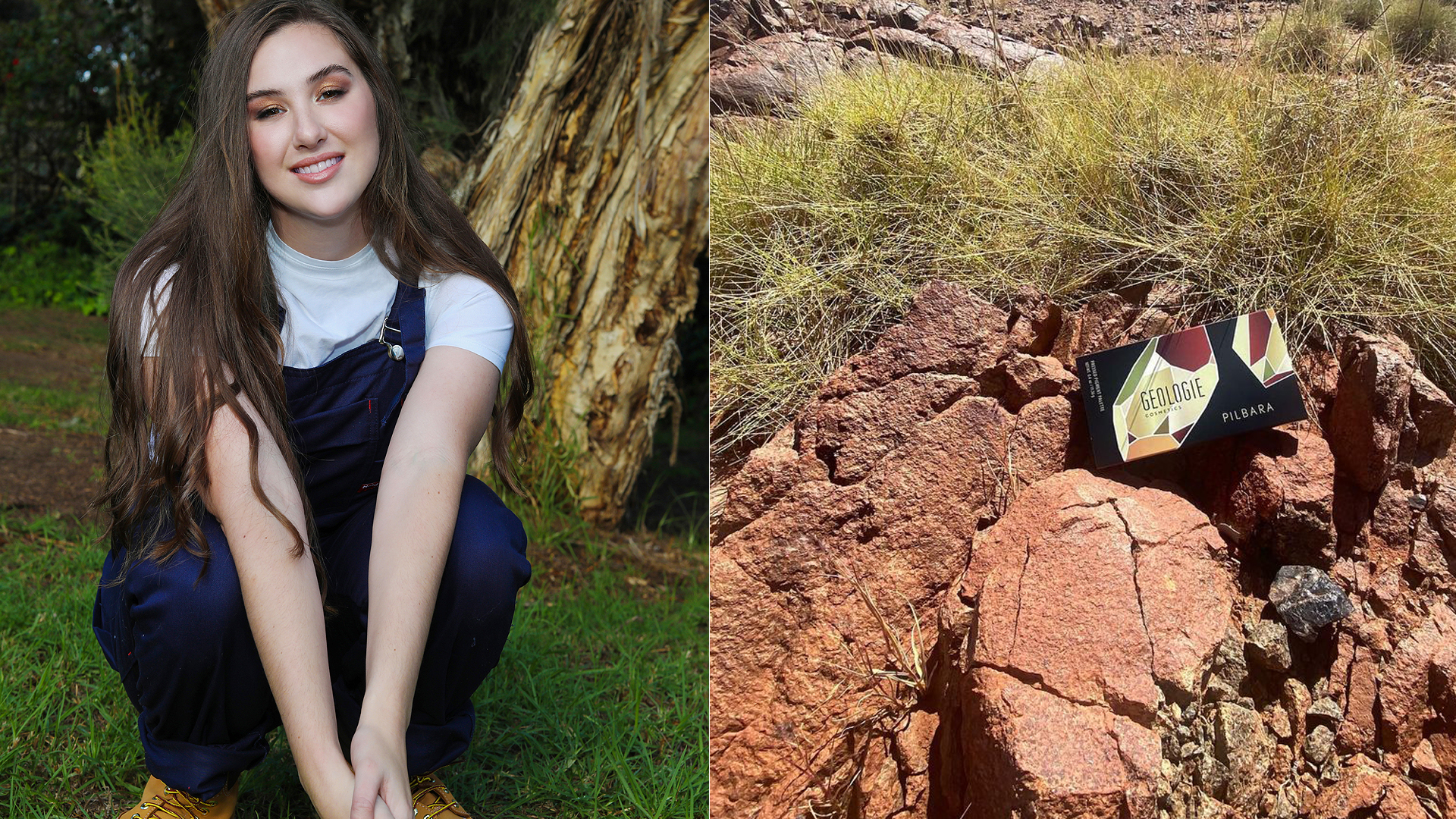 As a geologist, Eliza Stewart knows she has been given a unique opportunity to appreciate the colours and contours of WA’s outback.

And now her experience in some of the State’s most remote and rugged landscapes is providing the inspiration for a slightly unexpected side venture: a range of cosmetics, the essence of which is very much “forged in time.”

Stewart is still a geologist, these days in a database role based in Perth. But she is also the owner of Geologie Cosmetics, which launched in July with an initial offering based around the iron ore province for which WA has become internationally famous.

“My first product, the Pilbara Palette, is named after my favourite place on this earth,” Stewart explained.

“I absolutely adore the Pilbara and particularly the Hamersley Ranges and Karijini National Park.

“I’ve actually been trapped in a lightning storm travelling from Newman to the Karijini and the purple sky and the lightning storm against those gorges, it makes me want to tear up thinking about it because it’s so beautiful.

“I’ve taken that landscape and my passion for rocks and really tried to execute it so that when people look at the palette and the names and the aesthetic of everything, they say ‘yep, that’s WA, that’s the Pilbara’.”

A quick look through the six colours and four shimmers of the eye shadows in the Pilbara Palette is all it takes to reveal the strong connection between Stewart’s “day job” and her new venture.

There’s “Brockman Iron”, “Hamersley”, “Banded Iron Formation”, “Spinifex” and “Geyserite”, the latter of which may not be so well known but represents the earliest signs of life in the Pilbara.

Stewart’s journey into both geology and make-up entrepreneurship demonstrates the twists of fate that shape so many people’s career paths.

Originally Stewart had dreams of being a jewelry designer. But while doing Year 10 work experience at high-profile Perth jeweler Linneys, a geologist came into the store and she realised “I want your job, not this one.”

Meanwhile, although she had a long-term connection to “arts and colours” she admits to having had no interest in cosmetics until about 10 years ago.

“I slowly taught myself how to do make-up through YouTube and stalking make-up artists on Instagram,” Stewart explained.

“And then later I realised that all of the minerals I’d logged [in the field] or studied at uni were used in cosmetics, including the make-up I was interested in which was eye shadows and lipstick. A lot of iron oxides, mica and talc are used in cosmetics.

“I delved deeper into formulations and it became a real side hustle passion of mine, and I just got to the point where I really wanted to have a go.

“I thought the inspiration of WA geology and the landscape would be a good thing for my business.”

Already, Stewart says, there has been strong international interest, with half of her sales coming from the US and customers placing orders from Japan, Bulgaria and the Ukraine. She has also been “blown away” by interest levels in Australian and the response to Geologie on social media.

Stewart believes the range of experiences she has gathered in her relatively young career as a geologist has equipped her with important skills she has now been able to transfer to Geologie.

Prior to going into database geology, the Curtin University graduate spent more than three years working as an engineering geologist, interned with the Norwegian Geotechnical Institute and also spent four months as a vacation student at Northern Star’s Kanowna Belle operations.

See also  'We want to be the fence at the top of the cliff, not the ambulance at the bottom'

“When I was an engineering geologist, I lot of what I did was dealing with sub-contractors and it was important to have good relationships with them and my drillers,” Stewart said.

“With an independent make-up company, there are two ways you can do things. You can either do a course and learn how to formulate and manufacture make-up yourself, or you can do it the way that I have which is basically to subcontract out.

“I know what products I want, what colours I want and how I want everything to perform, but I outsource all the work.

“There’s a lot of back and forth with labs so it’s really important to maintain those relationships with your manufacturers and your packaging providers.”

Geologie’s products are certified as vegan and cruelty-free and the mica used to make them has been ethically sourced.

Stewart’s next mission is to grow further brand awareness for Geologie as she works to develop more eye-shadows and introduce lipstick and other complexion products to her range.

Having turned her love of rocks into not just one career but potentially two, she’s excited and encouraged by the increasing number of women who are entering the mining and resources sector.

Her advice to them is simple

“You will find that lots of people will definitely support you in your career. One of the things I’d tell other young women and girls is to find a ‘work wife’. It doesn’t actually need to be a woman but find someone you work with who will support and guide you and help you through your journey.”