How mussel-power is helping improve a vital WA waterway 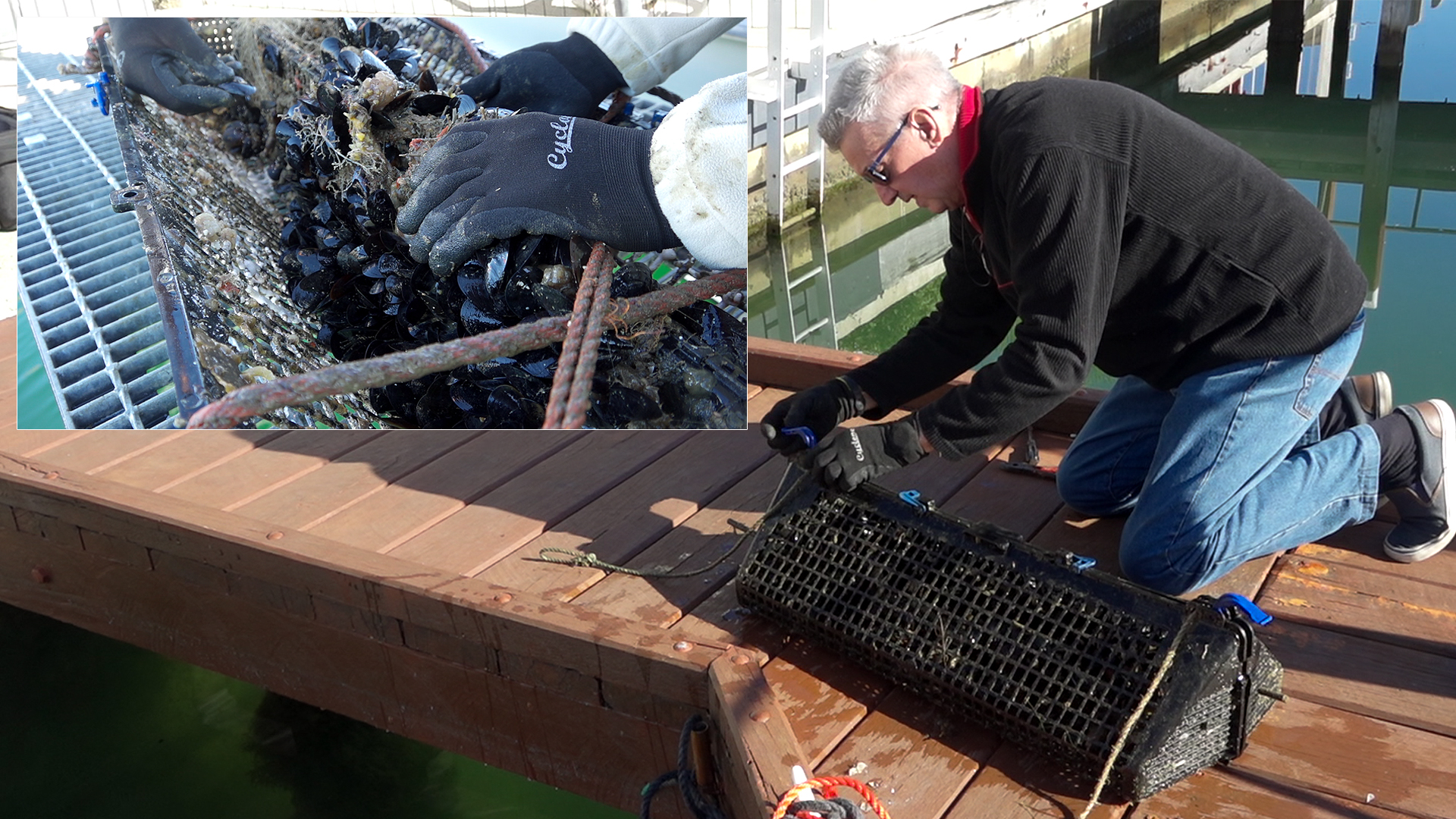 On a crisp clear winter’s morning on the Mandurah waterfront, Bill Backshell proudly looks over his blue mussel garden, one of more than 70 thriving in the Peel-Harvey Estuary thanks to a unique partnership between Alcoa, The Nature Conservancy and the local community.

“I can’t believe how quickly they are growing,” Backshell reflects.

“I’m quite astounded. The average growth is about 10 millimetres per month. It’s unreal.”

Mussels, for many of us, are best known as a delicacy usually enjoyed in a chilli-infused tomato broth, alongside fresh white crusty bread.

But they are also a vital part of Australian waterways, with a crucial role to play in the improvement of water quality and biodiversity – as Murdoch University’s Dr Alan Cottingham explains.

“Shellfish [like mussels] are the kidneys of our estuaries,” Cottingham, a Research Fellow says.

“Since European settlement, many of our estuaries and the catchments have been modified to allow for urban development and agriculture, and this has led to substantial increases in nutrients and eutrophification.

“Shellfish have the ability to alleviate some of those issues through their enormous water filtration capacity. Each mussel can filter up to 100 litres of water a day.

“They also form three-dimensional structures, which provide habitat and prey for important commercial and recreational fish, such as crabs and other finfish.”

Both Backshell and Cottingham are contributors to an innovative project that aims to enhance water quality in the 136 square kilometres of the Peel-Harvey Estuary, a wetland and ecosystem of international significance about an hour’s drive south of Perth.

Funded by the Alcoa Foundation, the project is a collaboration between the resources company, global environmental organisation The Nature Conservancy, Murdoch University, local schoolchildren, Traditional Owners and enthusiastic residents, who are growing their own mussels.

Part of The Nature Conservancy’s wider plan to restore 60 now-extinct shellfish reefs across Australia over six years, it will culminate in two pilot reefs – each about the size of two tennis courts – being installed in the Peel-Harvey Estuary in September 2021.

These pilot reefs will be stocked with 50,000 mussels being nurtured by Backshell and his fellow volunteer “shellfish gardeners” and a further 1.5 million sub-adult and adult mussels supplied by WA aquaculture operator Harvest Road. If successful, the pilot will pave the way for additional reefs and millions more shellfish to be installed as part of the Federal Government’s Reef Builder program.

“Part of what we’re looking to do is to restore some of the health and balance of that estuary system so that people can get out and use the system more, get on the water and go fishing,” Campbell said.

“Community support is really paramount to making a project like this work. The estuary is in those people’s backyards.

“It’s really important that we make people aware of the challenges the estuary faces, the things that can be done and the local action that can be taken.”

Up to 40 students from nearby Coodanup and John Tonkin colleges are actively involved in the project on a monthly basis, visiting shellfish gardens, monitoring mussel growth and helping gauge their readiness to be introduced “to the wild.”

Engagement and collaboration with the Bindjareb Noongar people, Traditional Owners of Peel-Harvey waters and surrounding catchment areas over tens of thousands of years, is also a key feature of the project.

In partnership with the Winjan Aboriginal Corporation, The Nature Conservancy will use the program to help build capacity in and develop work opportunities for the newly-formed Bindjareb Ranger Program and the broader Bindjareb community in the area.

For Alcoa and its global foundation, which have been mining bauxite and processing alumina in the Peel region for nearly 60 years, shellfish reef restoration is another step towards realising the Three Rivers, One Estuary vision it first launched in 2018.

“The estuary and the three main rivers that feed it, the Serpentine, the Murray and the Harvey, really are the heart of the region,” Alcoa Foundation Australian Lead Suellen Jerrard said.

“They are the environmental, economic, social and cultural lifeblood of this region.

“That’s why we’re partnering with organisations like the Nature Conservancy, as well as Greening Australia and Peel Harvey catchment Council [through the wider Three Rivers, One Estuary vision] and the broader community to help maintain, restore and improve these waterways.

“We want those waterways to be able to continue to fill that vital role for us now, and also for generations to come.”

That’s an ambition shared by Backshell and his wife Helen, and another Mandurah canal resident Bill Carrigan.

They all became involved in the project in late 2020 after a two-year feasibility study showed that restored shellfish reefs could make a major contribution to cleansing Peel-Harvey Estuary waters.

“I saw an article in the local newspaper about what was happening and then there was a presentation at the sailing club as well,” Backshell said.

“I heard all about it and I thought ‘well, this sounds pretty worthwhile.’ I’ve always been interested in mussels, in fact I’d tried growing them myself before.”

Baskets containing the mussels beds are suspended from jetties that adjoin both their houses and Carrigan says growing shellfish is just as rewarding – and possibly simpler – than standard backyard gardening.

Every four weeks the baskets are pulled up, inspected for damage and to allow removal of other marine life, and the mussels measured before being returned to the water.

“The thing I enjoy most of all is to see the extent of the growth,” Carrigan said.

“I love to see the figures, the mathematics involved and to see how [the mussels] progress month to month.

“There’s a definite sequence there that will mean a lot more to the scientists than it does to me but I really enjoy it.

“It’s like a little family growing up on your premises again.”

Waterways have been very much a part of Carrigan’s life and he’s thrilled to have the chance to give something back to the one he’s retired on.

“Since leaving school in Scotland at the age of 15 I’ve been involved in ships, shipping, sailing, engineering and surveying, both here and in Henderson,” he said.

“So a marine environment is very important to me. When we had the opportunity 21 years ago to come to this area, I couldn’t say no.

“I think [the shellfish restoration project] is a wonderful plan. These little bivalves [mussels], which in engineering terms are filters, will improve the water quality. That will improve the opportunities for fishing and probably create jobs within the fishing industry, and improve the wider biodiversity of the estuary itself.

“I’m very pleased and proud to be part of it.”