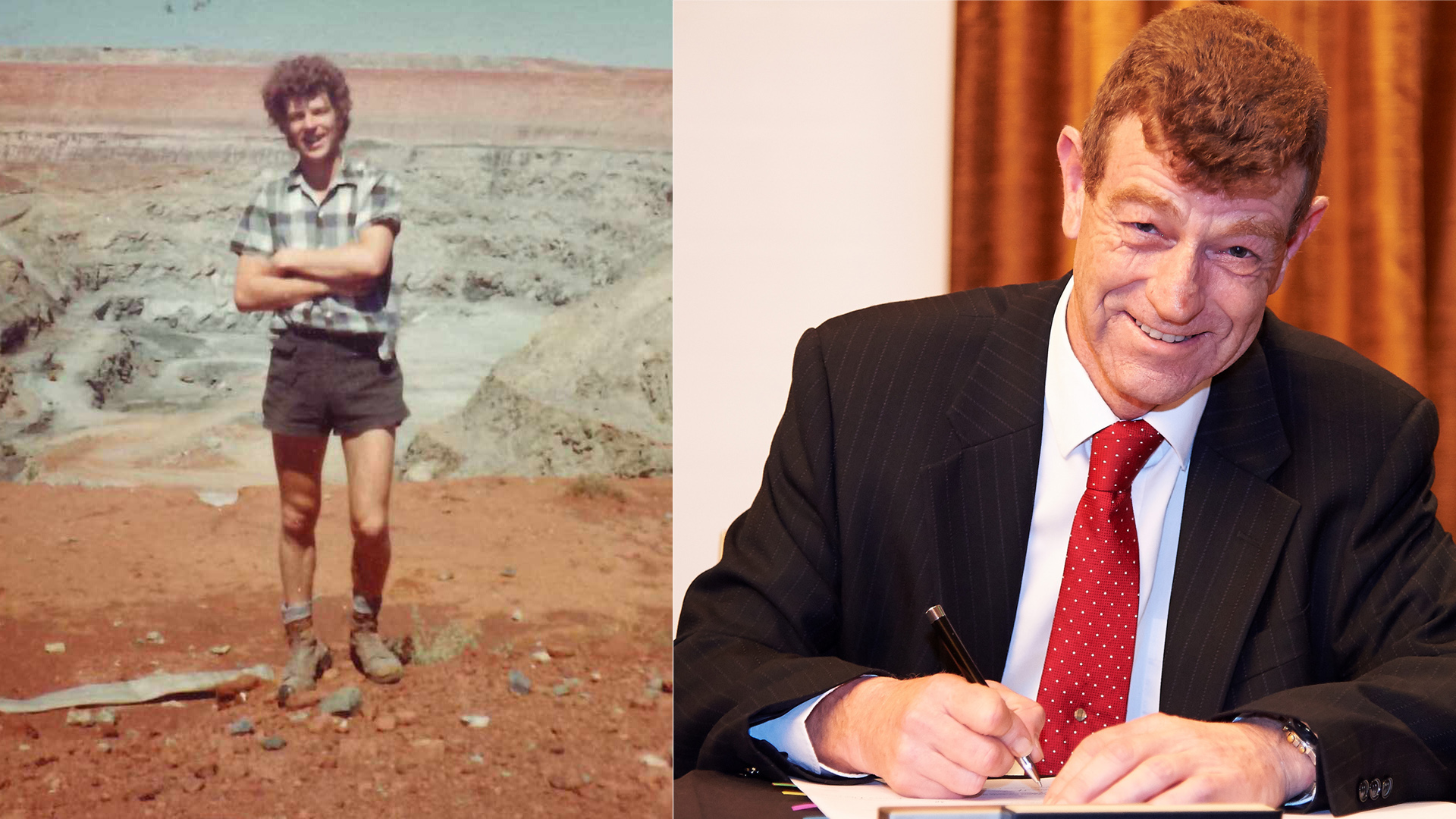 It’s not an exaggeration to say that when Jeff Haworth started out his career as a geologist, the WA mining and resources sector was almost unrecognisable to what it is now.

Being the 1970s, the hair was a fair bit higher and the shorts were a little shorter (as the accompanying photo would attest).

It was also a time when rushes for minerals were still just that – a bunch of people rushing to far-flung locations around WA to mark out the tenements they hoped would deliver a fortune.

The search for diamonds in the Kimberley in the late 1970s was case in point.

“It was really going back to the Wild West, you had people pointing guns at you and racing each other to get out to leases to peg them,” Haworth recalls.

“One particular time I was driving out there and it had been quite wet and rainy and one of my competitors had got bogged.

“He asked me if I would help him and I said I’d help him on the way back and kept going – I wanted to peg the land before he could.

“But unfortunately I was beaten because another fellow was in a helicopter, and he flew over the top of me and pegged it first.”

Haworth’s time as a diamond hunter followed an introduction to the world of professional geology earlier in the 1970s in another commodity known for its rush-inducing price spikes: nickel.

After diamonds came a stint in oil and gas, which took Haworth to New Zealand, the UK, the US and as far afield as the Norwegian sector of the North Sea.

But his passion for geology started much closer to home.

“When I was about 12, my uncle was a geologist working for a company called AMAX, which was exploring for iron ore in the Pilbara,” Haworth explained.

“He took me with him. We were driving around in a Land Rover, camping out in the bush at a station called Duck Creek, which doesn’t exist any more.

“For a young boy, driving in the bush doing that exploration and flying in helicopters, it was a dream come true.

“And that was the point I said ‘I’m going to become a geologist’.”

Geology remains at the heart of Haworth’s day-to-day activities. Since 1991 he has been with the Geological Survey of WA, the last nearly eight years as Executive Director – first of petroleum and then of geological survey and resource strategy.

For those not familiar with the Survey, it could easily lay claim to being WA’s best resource that you’ve never heard of and has been a key factor in significant discoveries such Nova-Bollinger [a nickel-copper-cobalt mine in the Goldfields], Gruyere [a massive gold resource east of Laverton] and Bellevue [another gold project east of Kalgoorlie-Boulder.

Haworth’s time at the Survey has coincided with a variety of commodity cycles, the introduction of several new waves of technology and a growing public focus on the environmental side of mining.

Indeed, it’s in that last space that one of Haworth’s favourite pieces of work at the Survey was undertaken.

“I think my most exciting discovery was when we were looking at carbon capture and storage,” Haworth said.

“This is where you collect CO2 from power stations or whatever the emitter is, and then pump that into deep deposit underground.

“We looked at an area south of Perth. It has a very thick layer of sandstone, almost like beach sandstone, and it’s around 1000 metres to the top of it. And it’s about one and a half kilometres thick.

“Interestingly enough, it comes from Antarctica. When Antarctica was at the bottom of Australia and was being eroded, that sand washed onto into the Perth basin in around Harvey.

“Okay, it’s not a conventional discovery if you like but it set off a whole campaign around what was known as the South West Hub and that, to me, was one of the most exciting discoveries we’ve made.”

Some 45 years after he graduated from Kalgoorlie-Boulder’s WA School of Mines, Haworth’s advice to aspiring geologists is simple.

“Geology is a fantastic career to go down – I’ve done so many things in so many different areas,” he said.

“We also have structural geologists, geochemists, geophysicists and palaeontologists. There is a smorgasboard of career opportunities you can take doing a geological degree.

“Exploration of mining isn’t going to go away any time soon…and I think the challenges [for the resources sector] that are around climate change, geology has a major part to play in dealing with that.

“When you’re talking about renewable energy, you need minerals to make that happen.

“For instance, an electric vehicle requires six times the mineral resources of an internal combustion car.

“Fortunately Western Australia is well endowed with these minerals and will contribute to the global targets to a low carbon economy.”