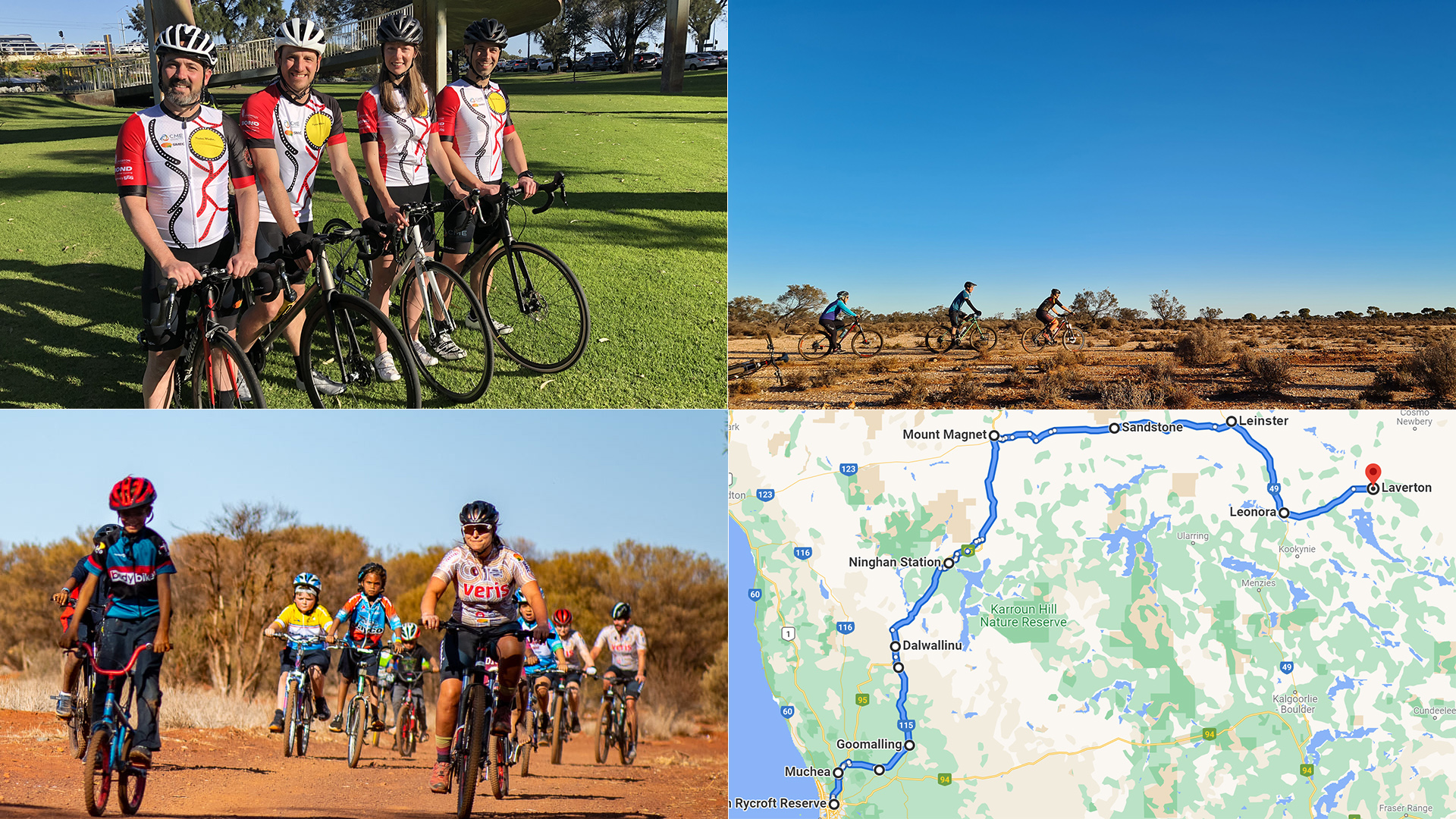 Growing up in the Northern Territory, riding a bike gave Chamber of Minerals and Energy of WA Chief Executive Paul Everingham the kind of adventures and freedom all kids look for.

“Being in little towns, I just loved riding my bike,” Everingham reflects.

“We rode barefoot everywhere we went with my brother and my buddies.”

But bicycles, as simple a mode of transport as they may appear, are not attainable for all West Australians. In remote Indigenous populations like that of Laverton in WA’s Northern Goldfields –  where bikes can provide a means of getting around for a wide range of ages and the foundation of healthy lifestyles –  they have often been a luxury that is out of reach.

Which is why a team of four from the CME will hit the road on September 18 on a 1170km ride that will raise funds for both mentoring programs in Laverton, and also programs that will help educate community members on the benefits of cycling, supply equipment for them to get pedalling and provide the know-how to repair wear and tear bikes cop from the rugged landscape.

The Perth-Laverton Cycling Classic is entering its third year and organiser Brad Hall said promoting cycling to Laverton and other communities had a wide range of benefits.

“Cycling doesn’t discriminate, like many sports do, with respect to age and fitness level,” Hall explained.

“You can have a five-year-old riding with a 20-year-old or a 40-year-old and having a conversation.

“The program’s benefit is really aimed at providing cycling programs for remote communities that can educate, nurture and develop health and wellbeing outcomes for these communities.

“There’s a huge scope of opportunity. The country we’re cycling through on the Perth-Laverton Classic is ultimately areas where we want to engage local participation and engagement with cycling.”

The ride to Laverton is important to Team CME members on a number of levels.

To start with, it will allow them to “give back” to a number of WA mining’s most historic and important areas – communities in which CME member companies still operate.

The first three legs will take riders on a picturesque path through the Wheatbelt and Midwest, from Perth to Goomalling, then on to Dalwallinu and then finally to Charles Darwin Nature Reserve.

But after that it’s on to Mount Magnet (where gold has been mined continuously since 1891 – WA’s longest such run), Sandstone (settled in 1894), Leinster (a comparatively young 1976) and Leonora (1897), before terminating in Laverton itself.  Despite being the best part of 350km north of Kalgoorlie, Laverton itself was established in 1898 and once had a population as big as 3500 people in 1903.

The scenic route will also allow the team to camp with Traditional Owners and learn about the history of their people and connections to the lands they and their ancestors have cared for over thousands of years. Along the way they will be joined on the road by community members of all ages on their own bikes.

And then there is the natural beauty on offer in WA’s outback.

“The opportunity to learn from and engage with the local indigenous communities through the Goldfields is really appealing to me,” Sorensen said.

“I also hear it’s going to be a really amazing wildflower season so that should be a fantastic part of the journey as well.”

Of course, an average of 150km a day for eight days through areas where maximum temperatures are spiking into the 30s, is hardly your average ride in the park.

Each of the team has been preparing for the physical rigours of the ride in their own way.

Sorensen and Duigou have been training with Hall at his Exercise Institute Training Centre, mixing regular indoor sessions with longer outdoor rides once a week.

Everingham has undertaken two to three longer rides a week to put “miles in the legs” and recently started mixing in some shorter and harder interval-based work.

“The indoor sessions I’ve done with the Exercise Institute have been great to keep the power up and get the heart rate going, while it’s been wet outside,” Carruthers said.

“Like Paul I’ve been trying to get out for the odd longer ride to get some resilience in the legs but I’m certainly hoping I’ll pick up some stamina and fitness as part of the ride as it goes on.”

All four team members say they first started riding a bike during their childhoods for very simple and shared reasons: cycling was an easy way to find some autonomy and get out and meet up with friends.

Decades on, riding is still an escape, but now one from the pressures of adult life.

“There’s obviously the physical benefits of it but definitely the mental side of things as well,” Duigou said of his love for cycling.

“It gives you peace and quiet and just that moment when you can take five from everything. It’s quite a special thing.”

For Everingham, time on a bike is a way of staying mentally and physically fit without some of the impacts of other forms of exercise.

“I used to love running as a kid and a young adult but my knees and hips and ankles don’t really like it so much any more,” Everingham said.

“A few of my buddies suggested I try riding a bike. Getting back into it as an adult, I rekindled the love I had for riding a bike as a kid and I’ve kept it up ever since.”

With support from a variety of member companies including Glencore Minara and Gold Road Resources, Team CME has already raised more than $11,000 after initially setting a target of $10,000. Member company Anglogold Ashanti is also one of the partners of the programs in Laverton.

Hall, a former professional cyclist, is proud of the growth of the event and the awareness about cycling it has generated in remote communities, particularly among Indigenous people. The first edition featured eight riders and the second one 12, but this year there will be 25 cyclists plus 10 support staff.

Hall says what participants take out of the ride is often something much bigger than anything they experience while on their bikes.

“The best feedback we’ve had and the most potent feedback is actually around the cultural exchange,” Hall said.

“We’re able to talk to different Traditional Owners along the route. We pass through four different countries and the elders of those countries take the time generously to educate us around what it means to be connected to country.

“The riders walk away with a sense of greater connection to the country that we reside in and that’s very powerful.”

To donate to Team CME, visit the fundraising page.