AFL hi-vis is apparently a thing…and Freo’s might not be the worst! 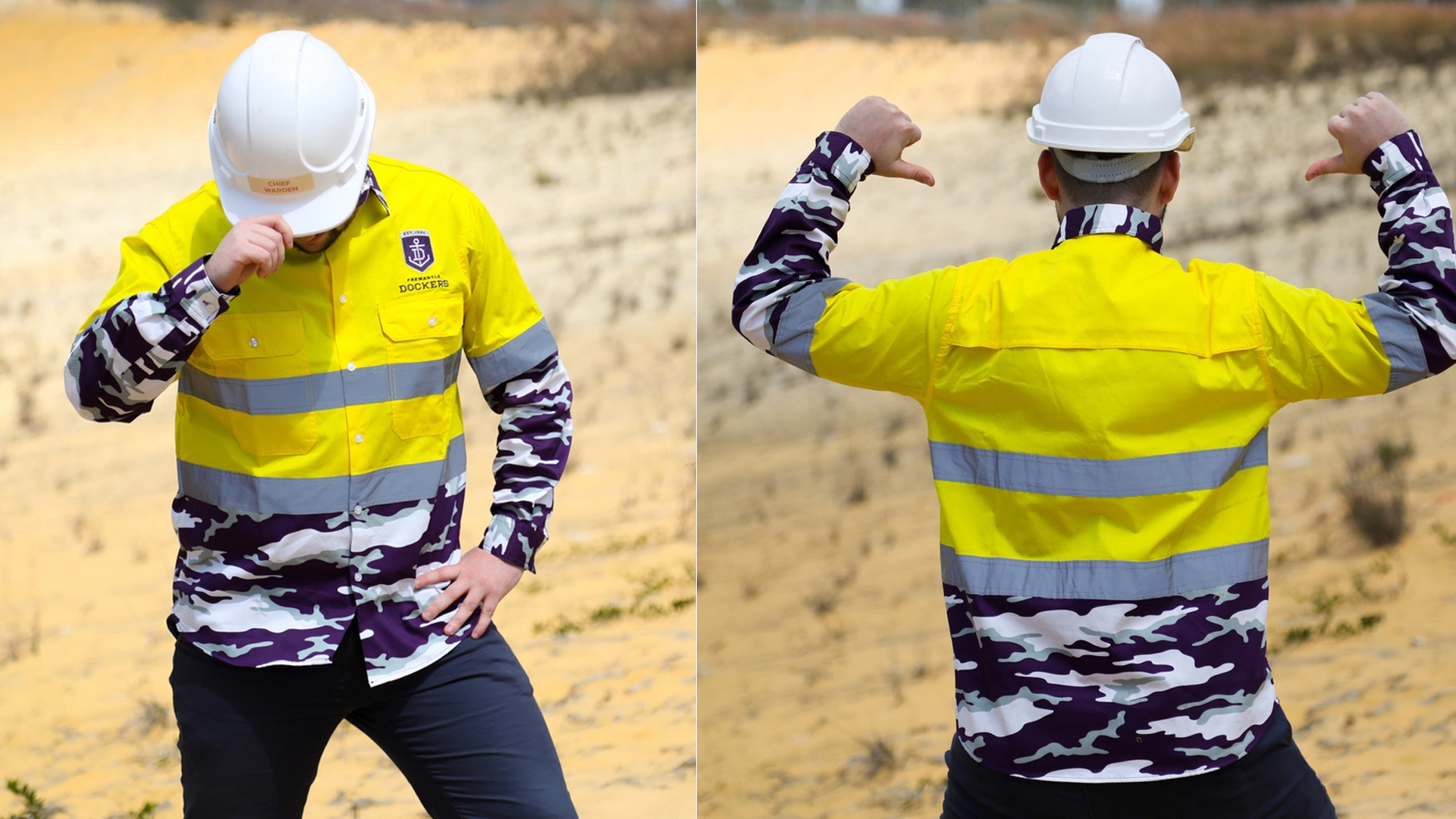 They might still be waiting for an elusive premiership – or, indeed, another finals appearance after a six-year absence – but the Fremantle Dockers may finally have beaten the West Coast Eagles to something: promoting team-flavoured hi-vis wear.

The shirts, available on the club’s online store for $80, come in a full spectrum of sizes from small all the way up to 5XL and attracted significant attention when advertised on the Dockers’ Facebook page on Tuesday.

They also tick a lot of boxes in terms of functionality, including being tested in compliance with “AS/NZS 4602.1:2011 Class Day/Night” (garments for high-risk applications), carrying a UPF rating of 50+ and having oversized font pockets with a button flap to hold mobile phones of up to 15cm.

As for the fashion sense (or possibly even the logic) in mixing bright yellow with purple camouflage, we’ll leave that for others to decide.

It’s unclear whether the model sporting the shirt online is unable to show his face because of his profession (a la the old Oral B ads) or if he’s just a bit bashful about a colour combination that delivers new meaning to the phrase “clash strip.”

As one wag on the Dockers’ Facebook post noted, in relation to recent controversy about people sneaking into the AFL season without tickets, “can I get into Optus free wearing one of these?”

The shirts are manufactured by Queensland company Ashtabula, which has designed a range that covers most AFL and NRL teams.

As this gallery proves, it’s very possible that the Dockers’ version may not be the worst of them!

It’s not the first time creative use of hi-vis has been in the headlines this year.

The highly infrequent social media user– barely a handful of posts over the past few years – was shocked to see his photo attract more than 7500 reactions and 450,000 views.

The suit was originally designed to help give mining staff making key operational investments confidence that they were every bit as competent as people wearing traditional business wear on St Georges Terrace.

Despite the overwhelmingly positive response to his sartorial splendour, Glenn said he had no intention of trademarking the get-up.

“The short answer is that I have no idea of commercialising [the jackets] and I can’t be bothered,” Glenn said.

“I’m too old, I’m too tired and I’m busy as I am. So if anyone wants to copy it and make a business out of it, they can go for it.”