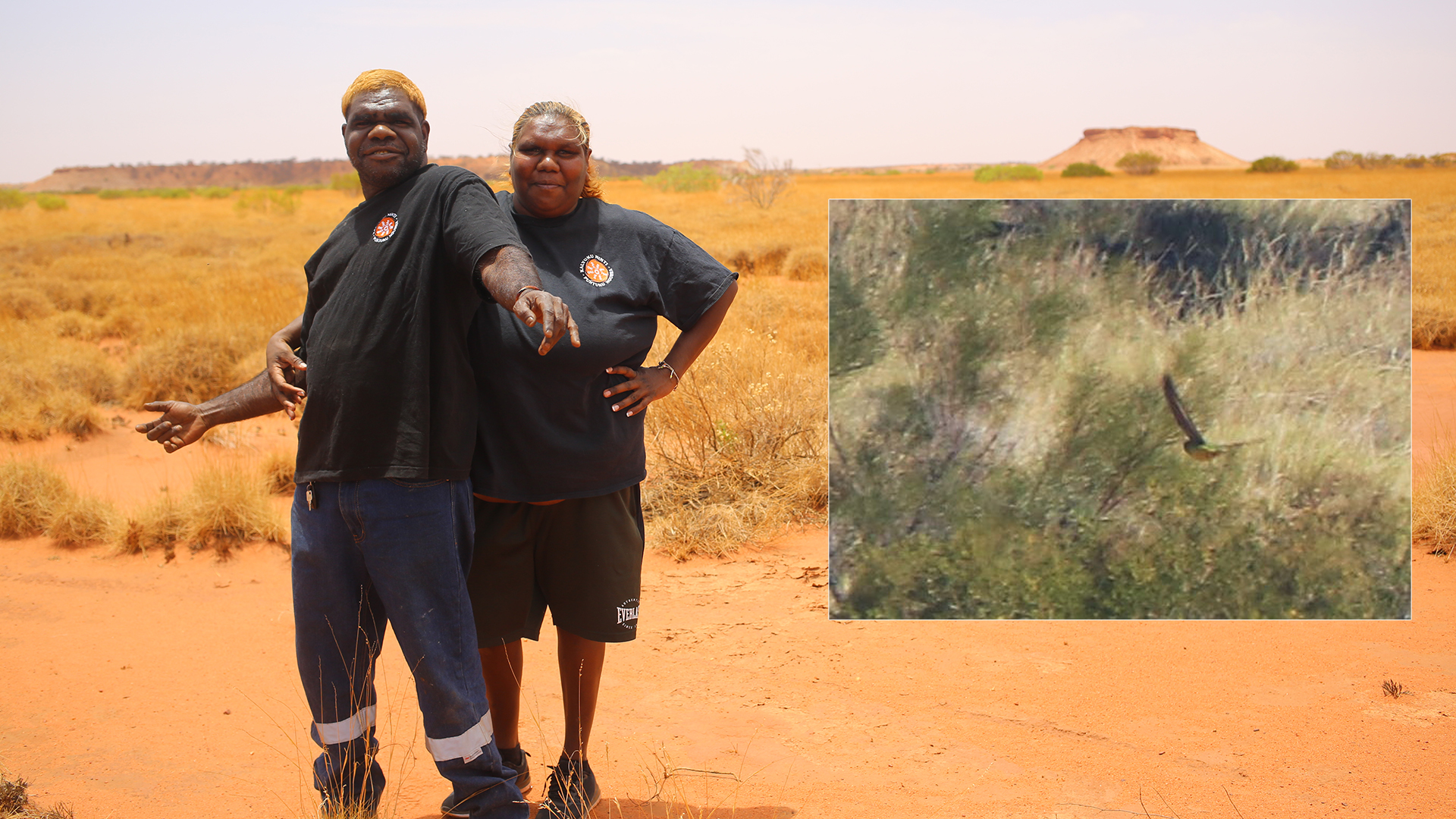 When you’ve become one of only a few dozen people to see what has been dubbed as “Australia’s most elusive bird”, it pays to get excited.

As it turns out, when you’re searching for the mysterious night parrot, it also pays to listen to your elders.

Such was the case in August 2021 when a group of Kanyirninpa Jukurrpa Martu Rangers working in the Great Sandy Desert snapped only the fourth known photo of a night parrot in flight.

“The old people told us to go and look for it around there,” Ranger Danielle Booth said.

“We kept on going to the same place, the same area for a couple of years.”

Needless to say, the search for the night parrot on Martu lands took a significant amount of patience and dedication to the task.

In addition to a two-year hunt for night parrot roosting grounds – work that initially led to recording of the bird’s calls around Pilbara salt lakes in August 2020 – the KJ Martu Ranger team had been on the ground from early morning when they finally made their epic late afternoon discovery.

Small wonder then that Neil Lane, the first of the team to see the night parrot, was so thrilled and screamed happily into the walkie talkie to alert his fellow rangers.

“I was excited to see that bird flying,” Lane said.

“It looked a bit like a budgie but it was big and green. It made me happy and excited to see it.”

Of course, the night parrot being the enigma that it is, capturing evidence of it wasn’t quite that simple. The bird which initially flew by Lane rapidly disappeared back into the spinifex and had to be flushed out, at which point 17-year-old Kimeal Simpson snapped her now internationally famous photo.

“She had to be really quick, because it was flying away,” Booth recounted.

The night parrot, which is classified as “critically endangered” in WA and “endangered” at a national level, was feared to be extinct between 1912 and 1979, when there were no confirmed sightings.

Then, from the 1979 sighting of an apparent flock of the birds in northern South Australia, only dead night parrots were found up until 2013, when naturalist and wildlife cinematographer John Young “rediscovered” and photographed the living species in Queensland.

While Young is a somewhat controversial figure in ornithological circles and the author of subsequently retracted Australian Wildlife Conservancy records, his 2013 find triggered something of a golden age of night parrot sightings.

The find was so rare and unlikely that prominent birdwatcher and author Sean Dooley described it as “the bird watching equivalent of finding Elvis flipping burgers in an outback roadhouse.” Other “birders” described it as a “holy grail.”

Since that momentous occurrence, instances of night parrot encounters have been unusually common – of the past six years, only 2019 was “night-parrotless”, with the bird observed in WA in 2017, 2018, 2020 and now twice in 2021, initially via sound recordings at FMG’s Cloudbreak mine and then with the KJ Martu Ranger encounter.

Booth said she felt privileged to have finally seen the night parrot after so many years of hearing about the bird.

It’s been speculated there might be only a few hundred night parrots in existence.

“[The night parrot] is really beautiful, and it’s really good to have seen it because nobody has really seen it before,” she said.

“We could only see a photo or a video on a computer or hear the sounds [it makes] but now we’ve found one and that’s really cool.”

The KJ Martu Ranger team, which is supported in part by miner BHP, is continuing its work to find more evidence of night parrot activity in the desert, regularly placing sound recording equipment at possible roosting spots.

It’s part of a wider effort to manage more than 14 million hectares of the Great Sandy and Little Sandy deserts, where 350 rangers employed across four Martu communities manage populations of the threatened mankarr (greater bilby), wiminyji (northern quoll) and mulyamiji (great desert skink), and recently confirmed the presence of the Pilbara leaf-nosed bat.

Simpson was on her first ranger trip when she snapped the photograph that brought international attention to one of WA’s most remote areas.

Both Booth and Lane agree that it is vital to have young people progressing into the ranger ranks, learning the ropes of looking after the countryside such as traditional burning and then passing that knowledge on to future generations.

As for the media focus and global headlines that accompanied the recent night parrot discovery, Booth had an understandable reaction.

“It’s cool but a little bit scary,” she said.