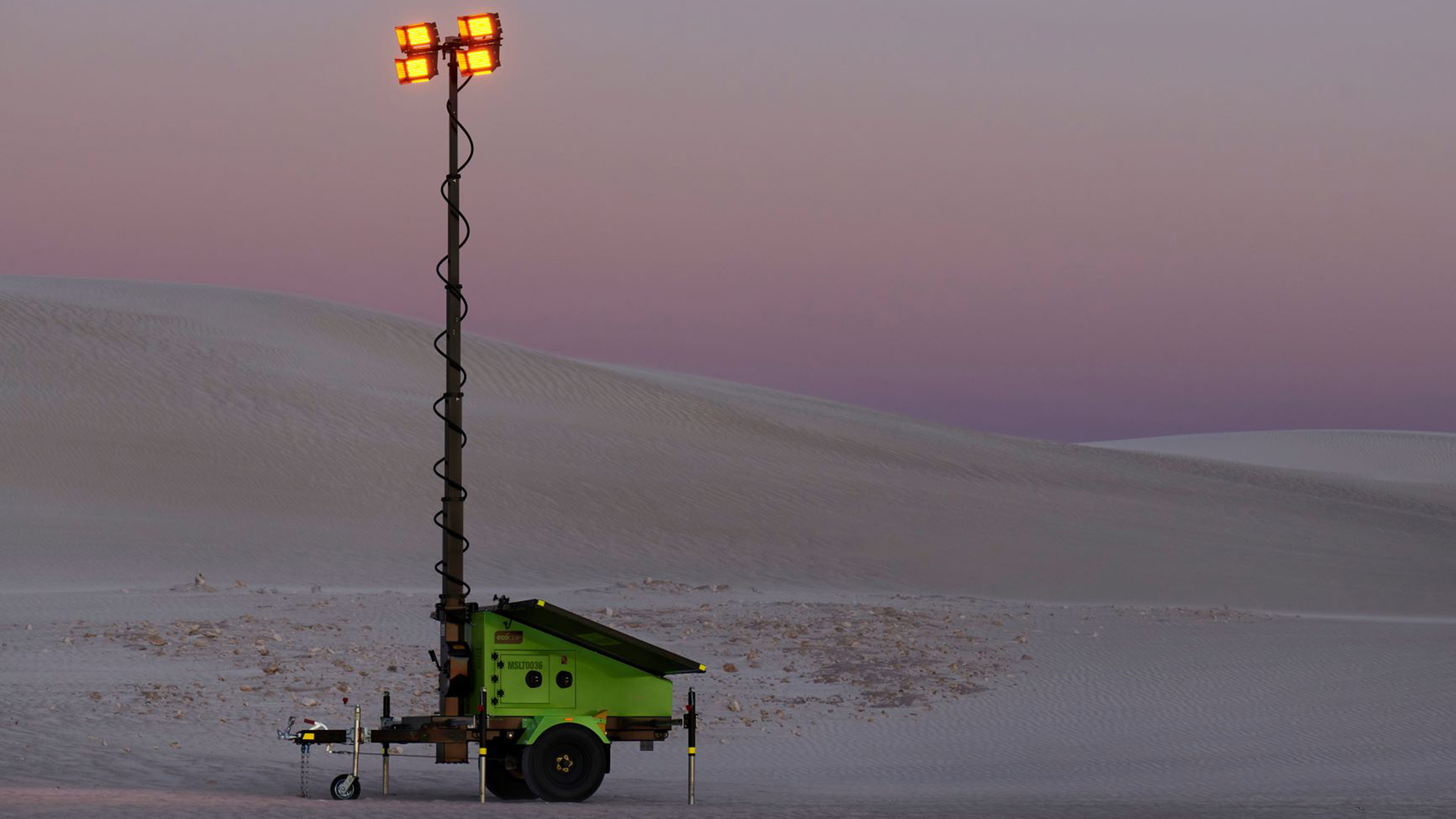 Time spent driving around mine sites provided Dave Sharp with the inspiration that has led to a WA small business success story.

“I would see diesel lighting towers still running during the middle of the day, spitting exhaust fumes out,” he recalls.

“They were obviously really inefficient, and I just thought ‘there’s got to be a better way to illuminate sites in these remote locations’.

“In the North West of WA, for example, the sun shines more often than not providing an almost unlimited energy supply. So why aren’t we using it?”

The result of Sharp’s self-questioning is a piece of technology named the MSLT4, which denotes the fourth generation of mobile solar lighting towers produced by his Perth-based company EcoQuip.

Its basic premise is simple enough that it might well lead to another question that accompanies many innovative ideas: how is it that nobody else has come up with this first?

The reality is that there are other solar-powered lighting towers on the market. But it seems unlikely there is one that ticks quite as many performance boxes as the MSLT4.

It can be easily deployed by a single person, thanks to its robust and lightweight design, the patent pending spring assist on its solar panel deployment system, and a custom-designed mast that can reach up to eight metres in height.

It can hold more than 20 kilowatt hours of battery capacity if required, has a patent pending control system that can be seamlessly swapped in and out without any need for special tools (or skills), and has LED lights which switch on and off automatically at sunset and sunrise.

There is no need for maintenance – it has no hydraulics, no solenoids and effectively no moving parts  – and it can be operated and monitored remotely via mobile phone or PC, meaning that once deployed it’s a fully autonomous illumination system.

Oh, and did we mention that a fleet of 100 MSLT4s operating 12 hours a day for a full year is estimated to reduce fuel consumption by one million litres, abate around 2500 tonnes of CO2 emissions and reduce total costs by approximately 50 per cent when compared to diesel fuelled alternatives?

For mining and resources operations that operate day and night and need to be illuminated accordingly, that’s a strong selling point.

“Another obvious advantage is the scope one emission reduction performance, given the carbon intensity of the unit is zero,” says Adam Boyd, CEO and Managing Director of Volt Power, which bought into EcoQuip in 2018 and now holds a 70 per cent stake.

“But the most compelling commercial aspect is that there is no operating expense and no maintenance and no requirement for skilled labour intervention. Therefore, the cost profile of a solar light tower from EcoQuip, is half that of a diesel fuelled solution.

“There’s no waste oil. There’s no refueling. There’s no fuel required. There’s no routine component replacement. The design solution has distilled the power system to three key components, with each able to be replaced within 15 minutes by unskilled labour capability.

One of the earliest mining and resources sector users of EcoQuip technology was Chevron, which used first generation trailers back in 2014. In July 2021 the company announced that 25 MSLT4s would be deployed on Barrow Island for a five-year period as part of its Gorgon natural gas project, with potentially more deployments across other  operating assets.

Other mining operators who use the lighting towers include BHP and Thiess, and there are also opportunities emerging in the US where the salient MSLT4 components are fabricated.

It’s fair to say the MSLT4 has been a labour of love for Sharp. EcoQuip started out life based at his home and he’s had a hand in the design and/or construction of every single element of the towers.

“I had an idea that I could build a solar/battery-powered trailer that could compete directly with the performance of a diesel unit, and that once complete we should take it out to site and give it a trial,” Sharp explained.

“So I went about building a trailer in my drive way and, using the knowledge that I had from my solar, mining and mechanical background, putting it together as best I could with what was commercially available.

“Firstly I was using parts off the shelf, manipulating, rewiring and changing them to push the performance to the limit to get the outcome we needed.

“Once proven I put it on a truck and took it up north and tried to get it in front of somebody.

“We’ve still got the very first trailer and also the first prototype of the MSLT4. They might look similar [to the current model] but pretty much every part is different.

“To give an example, we changed the panel format on a version of the Gen 4 trailers and had to make 130 parts changes just to make that panel fit.

“Our power management and telemetry controller is also a bespoke design that we developed in partnership with some US aerospace and electronics contractors. It helps deliver a 40 per cent efficiency gain over other solar battery powered illumination solutions.

“Every single part of this trailer has been designed to deliver a robust, reliable solution.”

The MSLT4 has also been designed for versatility. While its primary use so far has been for lighting purposes, the masthead can also be reconfigured to accept communications devices and technologies, including wifi/internet network re-inforcement.

Sharp says the future of renewable energy in mining – and across wider industry and society in general – is virtually limitless.

“There’s so many things that need to be powered by a reliable, low cost power system,” he said.

“Technologies are also getting more efficient. And when they get more efficient, they aren’t as power hungry, so the MSLT4 can then power them a lot easier with greater reliability and over long-timeframes.

“As we achieve increases in efficiency and density of energy storage, we can fit more energy inside a smaller space, so I see potential everywhere I look.”