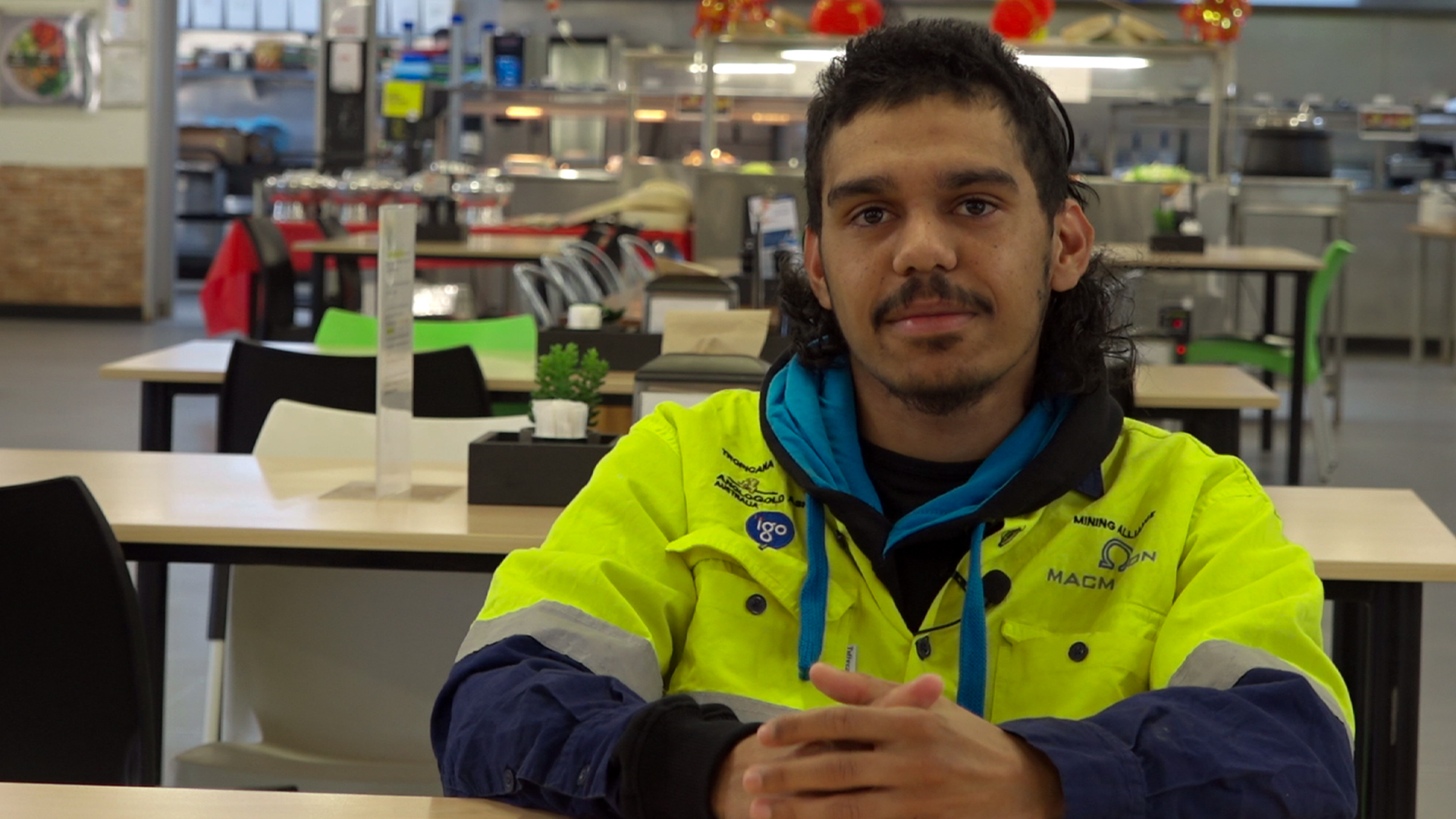 Kyle Lynch’s motivation for wanting to start a career in mining is simple – and one that would be recognisable to many parents.

“I have a one-year-old daughter and I’d like to provide for her,” he explains.

“I just wanted to give my daughter everything, so I said ‘well I’m going to join mining’ and I’m here now.”

Of course wanting to be part of the mining workforce and actually achieving that ambition are two separate things.

But thanks to an innovative and entrenched partnership between Carey Mining, AngloGold Ashanti Australia and Macmahon, there are now better opportunities emerging for Aboriginal people from the Goldfields who – like Lynch – are looking for a new start in mining.

The Get Into Mining Program, based at Tropicana gold mine some 330km north-east of Kalgoorlie-Boulder, builds on a 25-year relationship that can be traced back to Aboriginal-owned Carey Mining’s first mining contract at another AngloGold Ashanti Australia mine – Sunrise Dam.

The program’s basic premise is simple: identify eight Indigenous candidates, provide them with eight weeks paid training in Kalgoorlie-Boulder and at then at site (resulting in a Certificate II in Surface Extraction Operations), and finally, on graduation, a position at either Tropicana or Sunrise Dam.

“What this program does is it prepares people,” Carey Mining Operations Manager Frank Bethune says.

“For somebody that’s never been in mining before or never been on a mine site before, it’s very foreign to them. Sometimes [the participants] haven’t even worked previously.

“That eight-week program really takes guys and girls through a process where we show them what’s expected of them in the business environment and we give them exposure to what happens on a mine site.

“They get classroom training and walk out with a Cert II certificate … but they also walk out with a variety of jobs from dump operator to drill and blast crew, underground or geology services.”

In many ways the premise of Get Into Mining reflects the lasting vision of Carey Mining’s founder Daniel Tucker, who started the company in 1996.

In those early days the business operated out of Laverton (near its namesake, Lake Carey) and the first major client was Acacia Resources, which operated Sunrise Dam before being taken over by AngloGold Ashanti.

The basic question Carey asked back then is still one that’s relevant today: “why aren’t more Aboriginal people involved in mining?”

Finding a foothold…and sticking on

But given mining is largely undertaken in regional areas where Indigenous people make up much bigger proportions of the population, there is still clearly a great deal of room for growth.

Bethune says one of the biggest challenges – along with a measuring stick of success for Get Into Mining – is getting people to stay in mining once they get a foot in the door.

“I’m very proud that in the last four years we’ve got about a 50 per cent retention rate at Tropicana after completion of this program – and that those who have left, most are still in the industry,” Bethune said.

“For us, first success is retaining them [graduates] within AngloGold Ashanti or Carey Mining, as well as Macmahon.

“But success for us is also if they stick in the mining industry, because that’s the bottom line.

“We’re trying to get more Indigenous people involving in mining in a real way, with jobs that mean something.”

One of Get Into Mining’s success stories is Clinton Sambo, who came through the program in late 2018.

“Growing up a lot of older people, like my cousins, had got into mining,” Sambo said.

“I knew it was a great career to set yourself up and that there was always room for growth.”

Sambo’s career pathway at Tropicana illustrates both the last point in his previous quote and Carey’s great hope for Get Into Mining graduates.

“I was on drill and blast for two years and then I transitioned over to the workshop,” he explains.

“Now I’m an apprentice mechanic. The role change has been great, it’s been 10 months now and I’m really enjoying it.”

One of the most common phrases across a variety of industries when it comes to diversity and career opportunities is that “you can’t be what you can’t see”.

A vital component of Get Into Mining is the inclusion of Indigenous mentors like Marelda Tucker.

Tucker is on hand to help all trainees as they progress through the program, and then stays in regular contact with them after they have graduated into full-time roles.

“As a more experienced employee I encourage them in the way that the workplace needs them to commit, including around safety issues,” Tucker said.

“I also encourage them in things that may be affecting their personal lives. And I’ll help them with getting a licence if they need that.”

Tucker says Indigenous people entering the mining and resources sector often feel daunted by their new environment but flourish once they get established.

“Being a minority sometimes puts you on the back foot,” Tucker said.

“My personal motto is that if you be nice to people they will be nice to you. It’s not that we’re shy people, it’s just that we feel we need to ease our way into situations.”

How Get Into Mining works

At face value, Get Into Mining probably isn’t hugely different from other training initiatives.

Interest in the program is generated and gauged by advertising. Information sessions are held in Kalgoorlie-Boulder and  a selection of 16 applicants are flown to Tropicana for interviews before the final crop of eight program entrants is selected.

The criteria for selection is broader than for many jobs – and that’s reflected in the demographics of the participants. Prior experience or exposure to the mining and resources sector aren’t in any way essential.

“The main criteria is really attitude and being over 18 years old,” Bethune said.

“Historically we’ve had an even mix between male and female – normally four of each. But that’s more by chance than design.

Macmahon oversees on-site training for the participants and Tropicana load and haul superintendent Daniel Filer said the biggest hurdle many faced was less a technical one than a lifestyle adjustment.

“The main thing is explaining to them what they are going to miss out on,” he said.

“What a lot of people don’t understand when you get to fly-in, fly-out is that you’re missing out on family birthdays, Christmases and Easters because of the two-and-one roster.

“So it’s more getting people’s head around that. Everything else we can train people in, from how to drive a dump truck to how to operate other machinery.

“They walk out with a Certificate III in Surface Operations but it’s also about the team environment, working the day shift and night shift and the camaraderie you get.”

Growing into your role

Filer says one of the most rewarding aspects of his job is seeing the Get Into Mining participants not only develop skills and an understanding of the industry – but also find their voice.

“The last group we had come through, we had a couple of really, really shy people. Even just having a chat they struggled to talk too much.

“Within the first two months you could see the difference in confidence.”

Shekerah Van Zonneveld is case in point. Like Sambo, she was part of the 2018 program and is still going strong at Tropicana.

These days she’s a quietly confident truck driver. But before going through Get Into Mining and then moving into the wider workforce at Tropicana, she says she was just plain quiet.

“I can communicate more to people now,” Van Zonneveld said.

“Before I could never talk to people at all, because I’d get really anxious. Now I can talk and communicate over the two-way, whereas I wouldn’t even want to talk when I first started.

“I’m more outgoing and I actually talk to people now.”

A collective source of pride

Tropicana General Manager Stephen Perkins says the ongoing success and impact of Get Into Mining “means a lot” – to both the individuals and companies involved.

“It’s not just a matter of people coming through the system and becoming a truckie or a driller,” Perkins said.

“It’s about really giving them the grounding to have a career in mining.

“Not everyone makes it but the ones that do either hang around here, which is great for us, or go onto other things. We’ve had people come through the program and become underground miners in Kalgoorlie or go onto our other operation at Sunrise Dam in leadership roles.

“It’s very satisfying to see people, where we’ve given them a step up, and then they take control of things and take it to where they need to.”

For Van Zonneveld, who followed her sister’s footsteps into Get Into Mining, taking a step up from her previous experiences around the mining sector has been a source of pride.

“Before going into the program I was working in the food side of things [in mining],” she explained.

“That was an all right job but it wasn’t where I wanted to be at the time.

“I actually feel proud of myself…that I stuck around for this long. It’s hard, being away from family and stuff, but it’s good once you actually get into the swing of things.

“You meet a lot of new people and that’s really good.”

Sambo says Indigenous people keen to break into mining but feeling wary about the prospect should just back themselves in.

“It’s going to be a bit daunting at first but after a while it just becomes second nature.

“It’s really good to get into.”

Lynch, who hails from the small Kurrawang Aboriginal community between Kalgoorlie-Boulder and Coolgardie, is already planning on encouraging his mates to consider the Get Into Mining program.

“At the start it’s just like when you enter into high school,” he said.

“Everyone’s looking at you but once you start talking and making friends it becomes normal.

“I want to become an all-rounder. I want to drive the digger, the grader and the dozer…and then later on I want to be able to fix all those things.”