The old WA mine that’s become a tourist hot spot 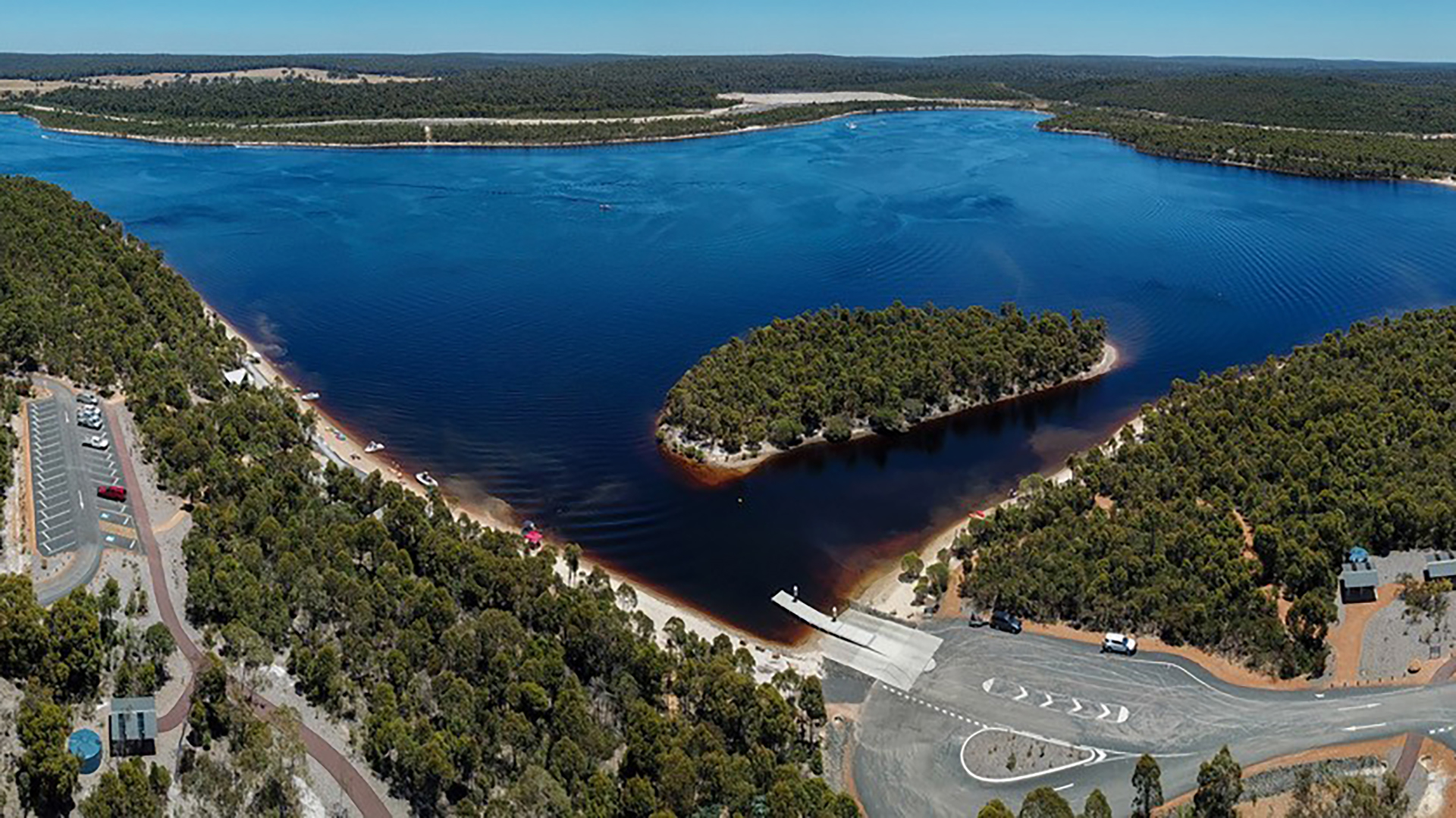 Photo above courtesy of John Bylund

If you were going to list the attractions that might bring thousands of visitors to a country town, a former coal mine might not be one that springs to mind.

But Lake Kepwari, a little more than 15 minutes’ drive from the main street of Collie in WA’s South West, isn’t any ordinary former coal mine.

Up until 1996, Kepwari was an open cut mine that went by the name of Western Five. In December 2020, after years of painstaking rehabilitation by Premier Coal, it reopened as a world-class recreational lake, offering visitors a wide range of aquatic pursuits and the ability to camp on site amid picturesque bush settings.

More than a year later and local businesses have very much noticed increasing visitor numbers in the town and the effect it’s having on their bottom lines.

The Colliefields managing director Michélè-maree Gannaway, who has run the historic hotel for more than a decade, said the town felt “slammed” from the moment the lake opened – a pleasant development given the negative impact the early stages of the COVID-19 pandemic had on the hospitality sector.

“Once Lake Kepwari opened, our weekend accommodation increased by 55 per cent and weekday accommodation doubled, while sales in the café were up 50 per cent on the previous year,” Gannaway explained.

“It got to the point that it was Lake Kepwari which meant we didn’t need JobKeeper after December, as our January was the best we’d had too. Traditionally, our main business was off the [bike and walking] trails, so our busy time had previously been from May until November.”

That feedback will be music to the ears of both Premier Coal and Yancoal (which operates the company’s mines), after achieving a significant and rare milestone last year when the site was relinquished to the WA Government and taken out of mine tenements.

At the time the company said it hoped the lake would prove to be a tourist attraction that would bring visitors into the region well into the future.

Twelve months down and signs certainly look bright that will be the case.

According to the Department of Biodiversity, Conservation and Attractions, which looks after the site, there were more than 50,000 visits to Lake Kepwari though the first 11 months of 2021. Bookings for the 21 on-site campsites were quick to fill up headed into 2022.

“Many community members and local businesses have stated that there are a lot more tourists and visitors to Collie since Lake Kepwari opened,” Premier Coal Environment and Community Advisor Lenny Bloomfield said.

“The main street is full of 4WDs, caravans and various other campers and travellers particularly on weekends, whereas previously the traffic consisted mostly of mine vehicles and a few locals.”

Of course, the lake holds attractions for locals as well – particularly those who spent significant parts of their working lives there when it was a very different looking environment.

“Many of our employees at Premier Coal worked out at Lake Kepwari when it was still the operational mine known as W05B and are amazed at its transformation from operational pit to a high value recreational hub,” Bloomfield explained.

“Looking at the precinct now, many people struggle to picture how it looked back then due to the success of the landform design, rehabilitation and the additional infrastructure installed since the site was surrendered.”

Lake Kepwari – named after the Noongar word for “playing in water” – is one of the centrepieces of an ongoing plan to diversify Collie’s economy.

While the town’s traditional industries of coal mining, power generation and farming still have significant roles to play – Premier Coal and Griffin Coal remain two of Collie’s biggest employers – there’s also a strong ambition to transition the area into a tourism hot spot.

That explains in part why the WA Government contributed $5.7 million to fund important infrastructure and amenities around the lake, as well as $10 million for a Collie Adventure Trails initiative to create more than 100km of high-quality mountain bike through the Collie River Valley, including Wellington National Park.

Nearby Wellington Dam made headlines of its own earlier this year when world-renowned artist Guido Van Helten finished a giant 8000 square-metre painting on its walls to complete a striking 40-piece “mural trail” that winds its way through Collie’s streets.

And that’s not mentioning the region’s traditional water holes of Minninup Pool, Honeymoon Pool, Stockton Lake and Black Diamond Lake, which have been attracting swimmers on hot days for decades.

The WA Government is also implementing a five-year Just Transition plan for Collie, to which a variety of industry partners, including Premier Coal, are contributing.

For Simone Fraser, whose business Traaverse launched in 2019 focused on outdoor adventuring, the timing of Collie’s emergence as a tourism destination couldn’t have been better.

“Lake Kepwari has added another option and dimension in the recreational experiences to be had around Collie – either stand-up paddleboarding or kayak hire, water skiing or a place to visit on a tour of Collie,” Fraser said.

“One thing I am finding when I am talking to clients is that I am able to offer them somewhere else to visit if they are hiring and doing their own thing and are in the area for a couple of days. I’m asking ‘have you heard of Lake Kepwari?’ and there are plenty who haven’t.

“Clients are totally amazed by the lake’s sheer size and facilities, impressed with the location so close to Collie and being immersed in nature. The rehabilitation is looking fantastic and people are chasing open space, blue sky and some peace.

“The lake is a great way to spend a lazy day, hiring a kayak or a SUP, watching water skiing and spending time with friends and family.

“It’s also perfect for day use as you can have large groups and there is plenty of space.”

Another local business operator, James Clarke of the Collie Ridge Motel, praised the “amazing buzz” in the town being delivered by tourism, while Collie Chamber of Commerce and Industry Vice President and Harris River Estate Winery proprietor Julie Hillier said visitors to Lake Kepwari often stopped off at other local destinations.

In Fraser’s view, changing outside perceptions about Collie is a key element of the new tourism “boom.” She says she’s never seen so many water skiing boats in the town.

“Collie people have always been fiercely proud of Collie and have always known our little gem of a place,” she said.

“It shows great vision to have transformed the open cut mine to a lake, and the murals, art gallery and biking trails attract a diverse range of people into town – whether’s its for recreation, mountain bike riding, skiing, camping, art or visitors who are interested in history.

“There is a legacy of the ‘old Collie’ but that image is changing as is the mindset. There are still challenges but tourism and industry can co-exist and we are working hard as a collective to align messaging, bringing people together and have some more aligned conversations.

“The Just Transition group is working hard to help industry look at alternatives and government investment and support. We are embracing all of this so our future is certain – even if it takes a different direction to where some thought we would go. As a community we are celebrating success.

“A good old nod to the past history, reflection on that and then steering the ship in a new direction is really exciting. There has never been a better time to live in Collie or invest in Collie.”

Premier Coal, meanwhile, has an ongoing source of pride in Lake Kepwari that vindicates both the original ambitious plan to turn the old mine site into a water sports facility, and the extensive work the company put into making that vision a reality.

Unlike Lake Stockton and Black Diamond Lake, which filled with water after being abandoned in the 1950s, the former Western Five has been a study in carefully considered rehabilitation.

Lake Kepwari now sits comfortably among a list of notable global sites that have transitioned into new, important and perhaps surprising roles once mining has ceased – including a Louisville quarry that has become an underground bike park, the Lefdal mine in Norway that has been turned into a renewable-powered data centre and Zollverein in Germany, at one stage the world’s largest and most modern coal-mining facility but now home to a massive modern centre for culture and art.

“The success of Lake Kepwari demonstrates that rehabilitation of a mine site can be more than just planting trees,” Bloomfield said.

“It demonstrates that cooperation between mining companies, the local community and government, and the ability to seek alternative final land uses that are an asset to the community, can be achieved with great success.”

Main photo on this article courtesy of John Bylund