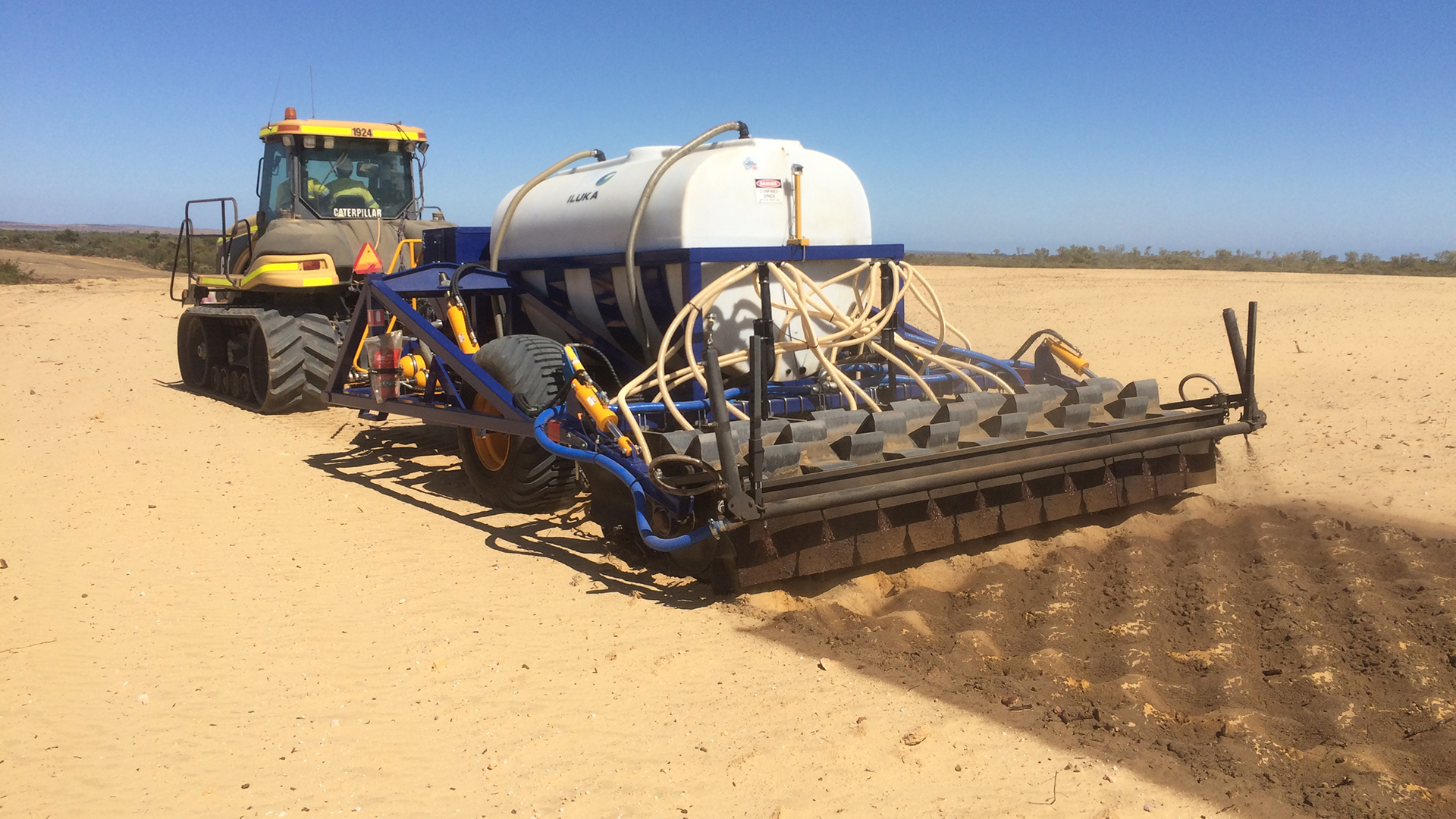 Spend a summer’s day in Eneabba and it’s pretty easy to see why rehabilitation of native vegetation can be a challenging gig.

Average maximum temperatures hang around the 35-degree mark and have been known to top 48 degrees in extreme conditions. Only around 30mm of rain in total falls on average across December, January and February and winds regularly gust in the 30-40 kmh range, making erosion of the sandy soils a constant problem.

Against that backdrop it’s quite remarkable what mineral sands miner Iluka has accomplished in restoring 18 square kilometres of Kwongan vegetation, to a point that only a carefully trained eye would notice the difference between established rehabilitated areas and untouched parts of the local environment.

It’s equally remarkable to consider the resilience of the Kwongan and its natural ability to thrive in soils that any home gardener would consider nearly totally inhospitable.

But sometimes everyone – and everything – needs a helping hand. Which is where a machine known as Flora Restorer comes into the picture.

As Iluka Principal Rehabilitation Scientist Mark Dobrowolski explains, “Flora” takes a whole bunch of individual rehabilitation techniques that were already being used and combines them in a “one stop shop.”

“Flora Restorer is a sort of a one-pass piece of equipment which spreads fertiliser, scarifies the ground preparing the ground surface, and places a diverse variety of seed in on that ground – anything from as big as my thumb to a tiny little dusty seed,” Dobrowolski said.

“And then it rolls a land imprinter over it, creating a dimpled surface, before it sprays an artificial soil crust of bitumen emulsion to hold those seeds in place until it rains.

“We combined all these processes together to improve our germination of the seed we collect so carefully and treat to break dormancy, and then spread out on the ground.

“We’re trying to make sure that we get the best value for germination from that seed that we can in our rehab.”

Flora Restorer has only been in operation since 2019 but already it’s making a strong impression, both within Iluka and beyond.

In October 2022, it was awarded the prestigious Golden Gecko Award for environmental excellence at the Department of Mines, Industry Regulation and Safety’s annual Resources Sector Awards.

The machine was designed and manufactured by Midvale-based Primary Sales Australia/Paragon Industrial, which started working on the first iteration of Flora in 2018 and then performed upgrades the next year.

“Since Flora Restorer came into operation we’ve been able to nearly triple the rate of germination of the seed we broadcast in rehabilitation – while using the same amount of seed,” Dobrowolski explained.

“At the same time, by combining all the techniques in the one machine, we can rehabilitate two or three times the area back to native vegetation, back to the Kwongan.

“So it’s a double whammy of increased area and increased quality of rehabilitation.”

While the efficiencies of Flora Restorer are certainly a selling point, Dobrowolski’s favourite piece of innovation on the machine is one that tackles the ever-present threat of erosion.

“Eneabba is regularly the hottest place in the State in summer – in the morning the wind blows from the east at 30kmh and then in the afternoon it blows from the south-west,” Dobrowolski said.

“The poor little plant has to survive in that windy, dry environment. It doesn’t want to get sand-blown all its life and sand drifts everywhere, so you need to control that to get those tiny little seedlings to establish.

“My favourite innovation on Flora is a combination of two very old technologies. One is land imprinting, which is a great invention by a soil scientist in the rangelands of the US named Bob Dixon.

“He invented these big rollers that are used in the western United States to dimple the land.

“Combine that in our sandy-profiled soils with bitumen emulsion crust – and I know it sounds and smells awful – but it’s great because it stabilises the land and the little plants can pop up through it and grow.

“The water pools on that surface and it doesn’t erode and gets in the ground, allowing those plants to establish.”

Mineral sands mining first started at Eneabba in the mid-1970s and for several decades it produced healthy quantities of ilmenite (the main source of titanium dioxide, which is often found in paints), zircon (widely used in decorative ceramics) and rutile (coveted for its brilliant white pigment).

With that resource now used up, Iluka has started to process rare earths stockpiles on the site, with a feasibility study currently underway to establish a fully-integrated refinery.

All the while, rehabilitation work continues to restore the Kwongan landscape to something like how it might have looked before mining started.

“Mining, for Iluka, is relatively short term and we move site-to-site,” Dobrowolski said.

“Our reputation is only as good as our last mine and that’s part of my role at Iluka, to ensure we research and adopt the best practices possible for doing rehabilitation after mining.

“In 20 years’ time, people will hopefully look across this site and just see natural Kwongan and won’t be able to see the difference between the natural vegetation and what we’ve rehabilitated.

“We aim to put back a functioning ecosystem which can self-sustain and perpetuate through life.”