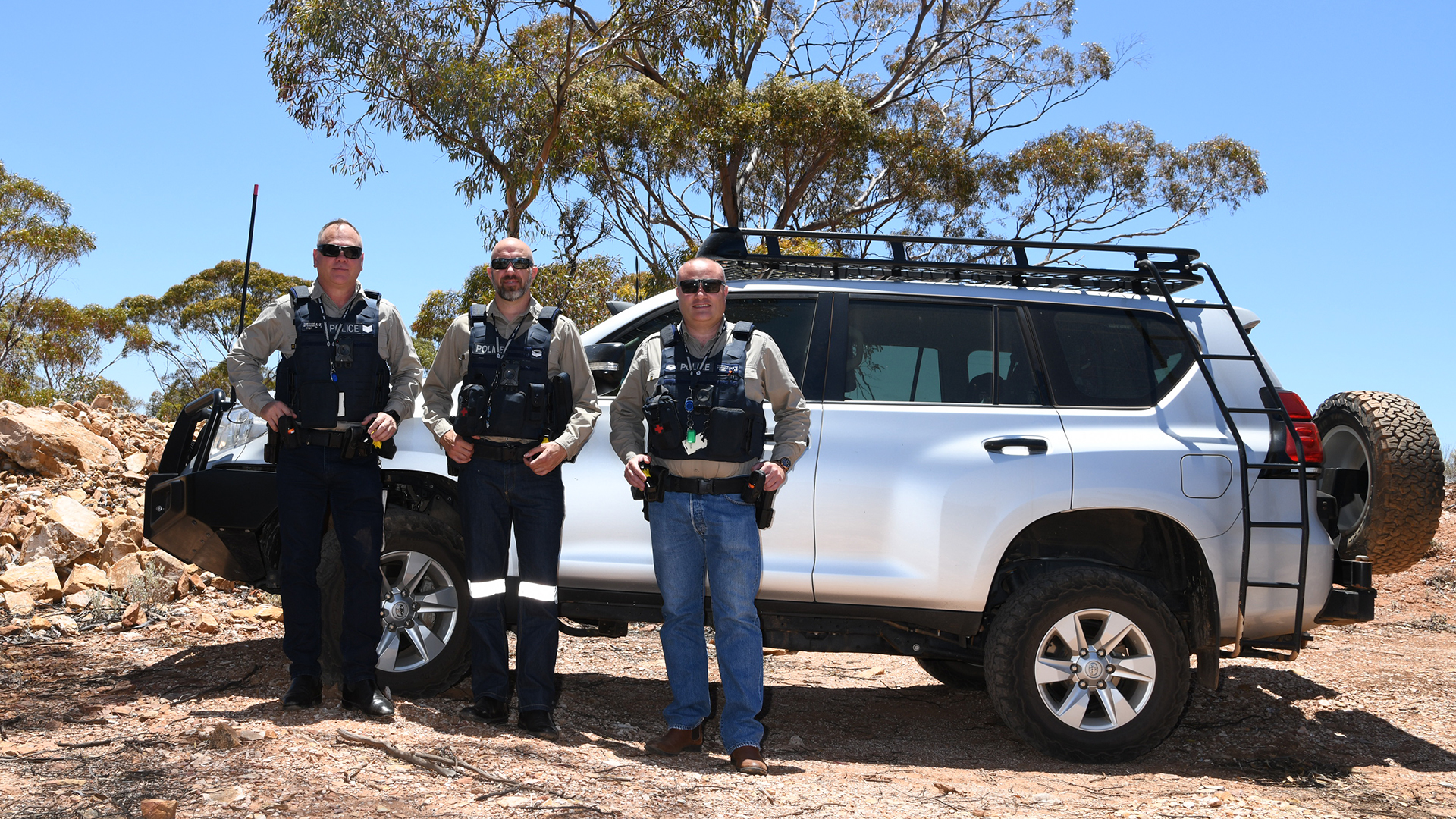 They are sometimes called ‘the ghosts of the Goldfields’ – but to anyone planning to steal from a WA gold mine, Dean Ovens, Andy Kettle and Stephen Holmes are anything but apparitions.

Methods used to steal gold may have changed over time but the commodity still provides a lucrative attraction to criminal elements.

And the element of surprise remains a key part of the GSDU’s modus operandi.

“We just pop up and people don’t expect us,” Kettle reflected.

“Recently we turned up at Halls Creek and stopped [mine site] buses to search them and people said ‘we thought you were based in Kalgoorlie.’

“We said we were and they asked ‘which flight did you take up?’ We told them that we drove up.

“It’s good that people are aware that we can just pop up whenever we want.”

The GSDU has its origins in a 1906 Royal Commission that inquired into the prevalence of gold thefts from WA mines. Throughout its existence, the Unit has been funded by the Chamber of Mines (now the Chamber of Minerals and Energy of WA) and based out of its Kalgoorlie-Boulder offices.

The current GSDU covers 32 sites across WA and the Northern Territory, stretching as far north as Halls Creek in the Kimberley region and also east into the Tanami Desert, which starts in WA and then extends most of the way across the NT.

With an aim to visit each site at least twice every 12 months, it’s not uncommon for each of the three officers in the Unit to cover 50,000km in a year.

“That includes stopping at multiple sites across the State, doing the meetings, presentations, risk assessments and investigations.

“We often try to attend shutdowns. The general managers of minesites will send us the details of their next shutdown, which don’t tend to be common knowledge among the general workers on site until the last minute.

“Shutdowns tend to be opportunistic for people hoping to get gold-bearing material.

“Sometimes we’ll try to prevent that happening through early intervention – people will see us on site and that’s a very strong preventative measure.

“But if we’re running an operation, we may just go out unannounced to do a stop and search.”

The Unit’s remit includes any type of criminal activity that may occur on a mine site, with the exception of homicide. The GSDU also has a full-time analyst who reviews police clearances and assists with identifying and mitigating risks in the industry.

Its basic reason for being remains much the same as it was for its 1907 foundation: a very small amount of gold is worth a very large amount of money, and presents an obvious temptation for people who come into contact with it.

That said, the scope of investigations has expanded somewhat and can range from burglary and damage on site to large scale theft of gold-bearing material. One case currently in the courts system involves an allegation that 16,931 tonnes of gold-bearing ore was illegally processed, resulting in 1881 ounces of gold being produced at a value of $2,112,075.45.

“A few years ago we had a case where someone stole a suction truck and basically went in and opened a valve into a sump [on a site] and effectively vacuumed the ore up and drove away,” Kettle recounted.

“We’ve also had people hire suction trailers, go to old mine sites and try to get what was left behind.

“Another case we had recently involved people buying old flatbed trucks from auction once they had been finished with.

“It was a bit like in the A-Team where they build a tank car – they’d use these trucks to ram minesite gates and drag stuff off using winches.”

There’s not much the GSDU hasn’t seen when it comes to crime around the gold industry.

From makeshift backyard processing “plants” involving cement mixers wrapped in doonas (a bid to dull noise), to fake appendages and fake urine used to try to beat drug tests, to a wetsuit and balaclava clad thief busting out a worm dance to evade security cameras (think a little like Catherine Zeta-Jones in Entrapment and watch on YouTube below), to a gun-toting robbery of a Goldfields mine that saw a safe taken and transported into the bush before being blown up with explosives.

There is often one common factor between gold-stealing operations: someone involved, somewhere along the line has a drug habit that might make them more liable to be coerced into being part of a scheme by criminal gangs.

It’s frequently the case that Holmes, Ovens and Kettle – the latter two of whom previously worked in the Kalgoorlie detectives squad – will have encountered some of the perpetrators before.

“We’re on first name terms with some of them,” Kettle says.

“Without sounding arrogant, they know that we will catch them but also that we’ll be fair with them.

“We want them to worry that we’ll be coming through that door…that there’s not an avenue for them to go down to get their money.”

In fact, even if the crooks get to the point of thinking they might have escaped with the gold, there’s still the challenge of trying to turn it into liquid currency.

See also  The electric plane revolution may already be upon us

And that’s not easy to do.

“We’ve got a very good relationship with most of the gold buyers in WA,” Kettle explained.

“They know if gold has come from underground or from a mill and they know that on sight. A lot of gold buyers also don’t take melted gold.

“They [gold buyers] are very helpful to us. Gold has to be exchanged for cash at some point and that’s quite often where people are caught.”