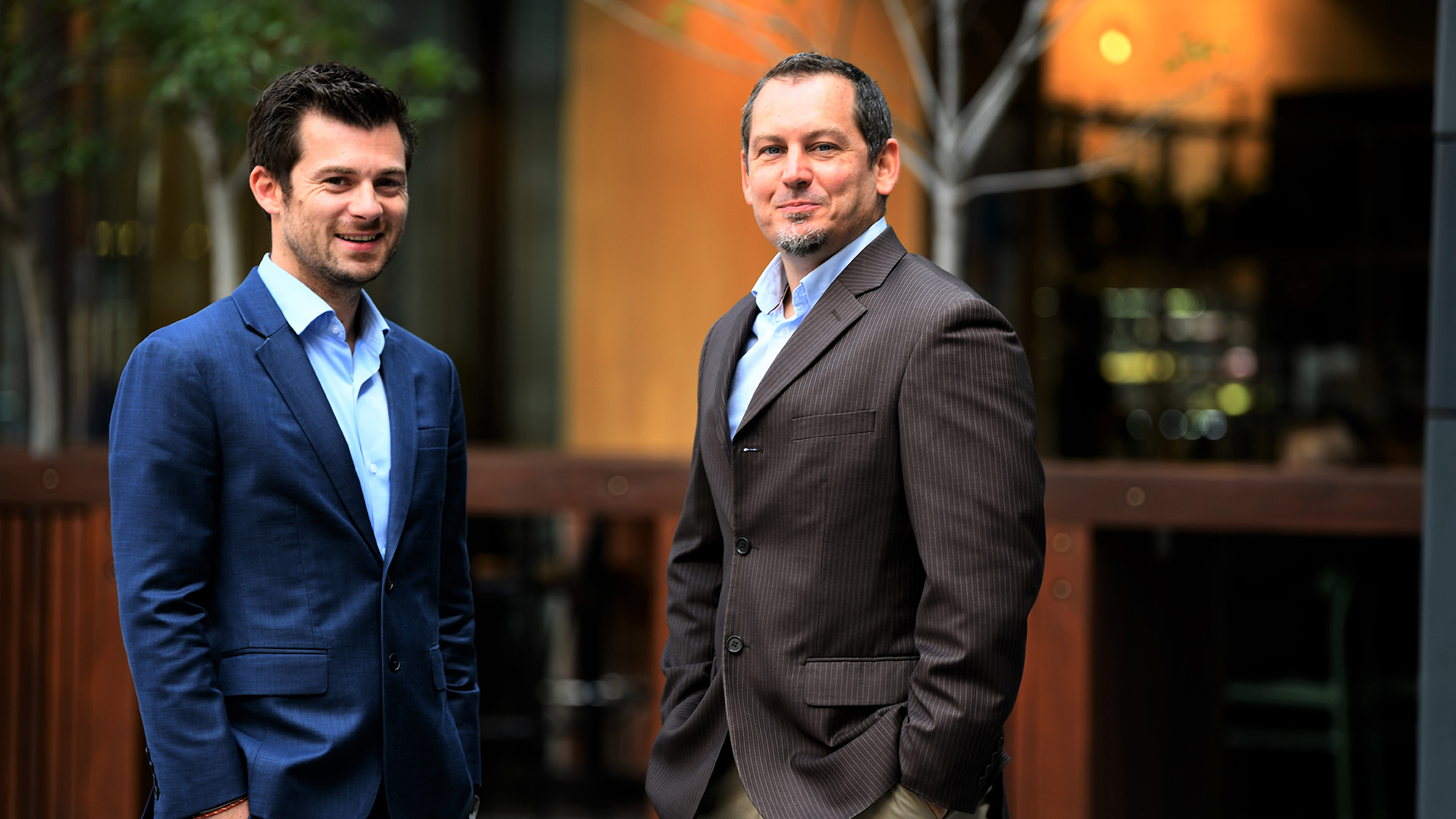 Like a lot of Australian stories, this one starts with a search for a toilet – but with far wider reaching ramifications than anyone could initially have predicted.

Chris Baudia (pictured above right) was a backpacking tourist from France back in 2007, when he realised there was no central database for travellers in Australia to find the nearest public toilet or shower facilities.

With a background in telecommunications and computer science, an app called Aussies Loos was soon born.

“It basically had a button saying ‘I’m busting’ that people could click on and it would give them the 10-15 closest public bathroom sites,” Baudia reflected.

“There were ratings of the toilets and navigation guidance for how to get there, and then we expanded to include information about beach closures.

“Beach closures came about because of my French background. Whenever I got close to the water I tended to have the impression that a massive great white would come at me!

“We also started including what we thought would be key information people would like to see – like grocery deals and fuel.

“So if you got within five kilometres of the petrol station with the cheapest fuel, you’d see something come up on your phone without having to search for anything.”

At the time apps were still something very new to many Australians and the technology seemed a little bit magical.

Aussies Loos no longer exists but its early success helped Baudia realise the technology involved was more valuable than the app itself.

In short, if you were able to identify someone’s location very precisely, without totally draining the battery of whatever device they were using, then you had something that could be used across a multitude of industries.

Fast forward nearly 15 years and Baudia is founder and CEO of GeoMoby, a company he started in 2013.

A version of the technology that he initially delved into in the hunt for a toilet is now being used internationally on mine sites from a safety standpoint, allowing for the locations of people and equipment to be pinpointed and monitored against other important data, including COVID-19 exposure risks.

“It allows you to take a picture or record audio underground and send that to the surface if that’s what is required.

“But it’s not only about location because there is also context in terms of the data that goes with it.

“While our technology can pinpoint where people and assets are, it can also cross reference this with a variety of information – body temperature, heart rate and oxygen saturation levels if we’re talking about people, gas levels in specific areas of the mine, and speed of movement in relation to an asset [equipment or a vehicle].”

In terms of safety incidents, that means responders not only knowing exactly where on site they need to go but potentially what the situation looks like before they get there.

From a COVID-19 perspective, it allows for the early detection of indications a worker may have been infected with the virus and, if that proves to be the case, which colleagues they have been in close contact with for what periods of time. From there, the technology can also help identify whether an entire site needs to be shut down or instead if only certain areas should be closed for deep cleaning.

Of course, the question begs as to how all this can be achieved in remote locations which may well be lacking in mobile phone reception and where installing wide-reaching wi-fi would be a highly expensive exercise that would interrupt operations.

GeoMoby’s technology revolves around the use of wireless, cable-free beacons to “geofence” locations and establish virtual perimeters for real-world geographic areas. A person or piece of equipment leaving one defined area of a site will be “picked up” by the beacons in the next area, with a degree of accuracy down to the nearest metre.

It can be facilitated by GPS, cellular networks, internet of things devices (effectively sensors), wi-fi and – importantly in an underground setting where battery power is at a premium – Bluetooth Low Energy personal area networks.

“We’ve got a processing engine that calculates the positions of people or assets and then spins up that position in a 3D environment on a web application,” Baudia said.

Nine years after launching, GeoMoby is now up to a staff of 14.

Baudia continues to manage the technical direction of the business but, in one of those unusual quirks of fate, is now flanked by fellow Frenchman Mathieu Paul as they work to market GeoMoby’s products to the mining and resources sector and other industries.

“Mat’s wife and my wife actually played handball together and at some point we invited them over,” Baudia said.

“Mathieu has a great business acumen, with an MBA and having worked with small and medium-sized businesses to grow and raise capital.

“At some point we started talking about my business and it seemed very natural for me to say ‘I think you can help.’ Mat said that he could definitely see where the technology was going and that he would love to.

“We made it official a few years and he joined the shareholding. In a nutshell, he is the sales director and I’m the technical director/CEO.

“We think our technology has the potential to save lives and boost productivity and one day we’d like to see our innovations employed at every mine site around the world.”