How an unexpected cadetship opened up the world 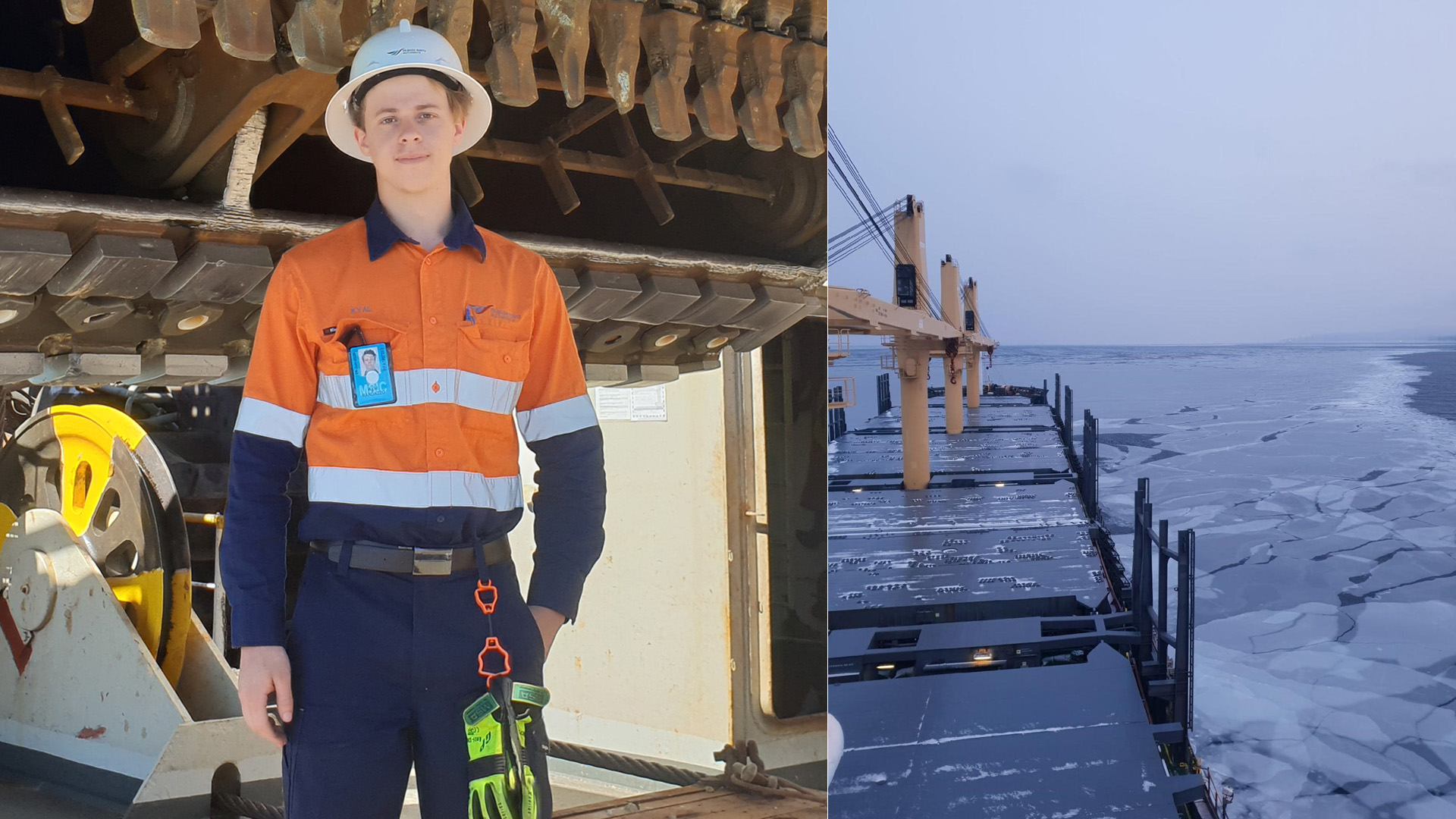 It’s a long way from the often relentless heat of Port Hedland to a frozen ocean in Russia at minus 25 degrees – and Kyal Randazzo knows that better than most.

At the tender age of 21, that means he’s already spent 18 months at sea, visited 11 countries and sailed in pretty much all of the world’s seas, bar the Mediterranean, the Black Sea and the Atlantic Ocean.

Not to mention spending the festive season in some pretty unusual places.

“Christmas in 2019, I was in Russia and the entire sea around us was frozen,” Randazzo reflected.

‘We were at anchor and there was metre-thick ice around the ship. Just stepping outside and experiencing those elements, especially coming from Port Hedland, was definitely interesting.

“As a sidenote to that, you’re in Russia and it’s -25 degrees and then you set sail, and within the next five days, you’re in a tropical and hot region.

“Being able to acclimatise quickly and being exposed to those kinds of conditions is very interesting as well.”

Remarkably, Randazzo and his family had no seafaring links prior to him taking up his three-year cadetship.

“I’d finished Year 12 at Hedland Senior High School and was taking a gap year working on construction on the Port Authority VTS tower,” he explained

“I was thinking about going to university and studying something in the field of science, because that was my interest – but I wasn’t sure if there was a career that I would really enjoy and could pursue as a long-term goal.

“A friend informed me about the cadetship program. I used to watch the ships come in every day and I had no idea of a career at sea.

“But then I looked at what careers at sea there were and realised there was maths and science involved, and a lot of interesting sciences you could implement into the job.

“From that point on, I knew it was a career I wanted to pursue.”

From never having been to sea, to graduating with an Advanced Diploma of Nautical Science – 2nd Officer Licence, it’s been a very busy three years.

Randazzo been mentored by a harbour master, gained experience in operational aspects of pilotage, tugboats and berthing, undertaken pre-sea training at Fremantle College, and spent time at the Australian Maritime College at the University of Tasmania learning celestial navigation, leadership and emergency management, en route to qualifying as an officer.

In between all that, he also notched the required 300 days at sea with German company Oldendorff, including time on board giant iron ore carriers taking precious cargo out of WA.

“With the iron ore ships, I’ve seen cargoes of $60 million and then with general cargo, I’ve seen loads of up to $400 million,” Randazzo said.

“As a cadet, being able to experience how we handle that cargo, you can see that it’s a lot of stress that gets put on officer’s backs. When I sign on as an officer, I’ll be officer of the cargo watch, so I’ll then be liable for that.

“When there’s so many millions of dollars worth of cargo, you have to ensure that it’s getting handled correctly and the ship is loaded correctly to deal with the stresses.

“If you’re looking at a ship with 100,000 tonnes of iron ore, that’s going to go down pretty quickly if the stresses and stability aren’t accounted for properly.

“There’s also preparation to ensure the cargo isn’t contaminated, so that the ore is sold in its pure form.

“There’s a lot of responsibility.”

In the long run, Randazzo aims to one day take on even more responsibility in relation to iron ore carriers.

If all goes to plan, his next five to seven years will largely be spent at sea, initially two to three years in his current  officer level, before hopefully moving to a chief officer role (which would require a trip back to University) and then qualifying as a master mariner, a rank that would entitle him to captain any vessel, anywhere in the world, regardless of size and tonnage.

But Randazzo’s ambitions don’t stop there, with his sights sets on eventually becoming a marine pilot. This highly specialist job requires the ability to safely navigate massive boats in and out of narrow shipping channels with little room for error.

“You learn how to maneuver these ships with tugs, which is something that’s very difficult when you have a ship that’s 18 metres under the water with fast tides, restricted waters and passing ships,” Randazzo said.

“It requires a very high level of professionalism and expertise. I want to reach that level and achieve something which is, in my opinion, kind of extraordinary.

“You have a lot of time to think at sea and my thoughts were ‘I’m not here for the money, I’m here for the experience and I want to get to the highest possible level that I can’.”

Pilbara Ports Authority started its cadetship program in 2018 and there are currently five cadets in the program – including the first two females, Katelyn Arnold and Jeri Ingleton. For more details on the program click here.

My mentor from the start to the end [of my cadetship], still now and hopefully going forward, is deputy harbour master Jason Rebello. He has been extremely important. He’s done it all, he’s been everything from a cadet to a master mariner, and when I was going to sea and sending my reports to him, he would have advice on how to deal with different situations.

I was mostly interested in going to the gym on board – I really do enjoy working out and maintaining my fitness. As a cadet, you do get some off time, but equally it’s very busy and you only get a few hours per day to yourself. There’s actually quite a lot you can do on board, instruments you can play, gaming like PlayStation and Xbox and parties every couple of weeks as well. But my main interest was going to the gym.

The food is good – there’s actually an international maritime labour convention that dictates crew members must have good food on board. It’s not just willy-nilly or if the company feels like it, crew must be fed well. Generally every day there are two different meals that you can choose from each sitting and I’ve always enjoyed it.

Finding his sea legs (and stomach):

My first contract at sea was on a capesize vessel [large bulk carrier] and I did experience bad seas. But at the same time, it was quite comfortable and I felt like a true seafarer who had experienced the high seas. But then my next ship was a smaller handysize vessel [smaller bulk carrier] and within the first two hours, I was sick for the next four days. It was terrible, shocking. The weather was really bad but not as bad as it could get, and that’s when I realised ‘I’m not a true seafarer just yet.’

Communicating with fellow crew (most of whom are from overseas)

The international working language [on the sea] is English – but we do call it Mariner’s English. There’s a lot of new words that you have to learn and a lot of different terms. In my first days on board, someone would ask how I was and if I answered in the Australian slang, they’d look confused. So basically the entire Australian language and dialect goes out the window and you have to relearn a type of English that you can communicate with. Coming back ashore, most people don’t even recognise me as being Australian, because the way I talk on board it sounds nothing like an Australian accent – it’s very much block words and there’s no slang. I’ve actually been in Australia on a ship talking to a stevedore, and he asked if I was Ukranian!

Advice for anyone considering following him to sea

This is definitely a role that requires a high level of commitment. But if you’re willing to commit and reach whatever level you want – if it’s finishing the cadetship and becoming an officer, sailing in the Australian fleet or entering a shore-based role – there’s so many opportunities and it’s a very rewarding career. There’s good money in it and if you want to pursue it further and become a pilot, then you’re set. For young cadets, if they want to commit and are interested in science and mathematics, I always say that it’s a golden ticket opportunity because there’s just so many things you can do.