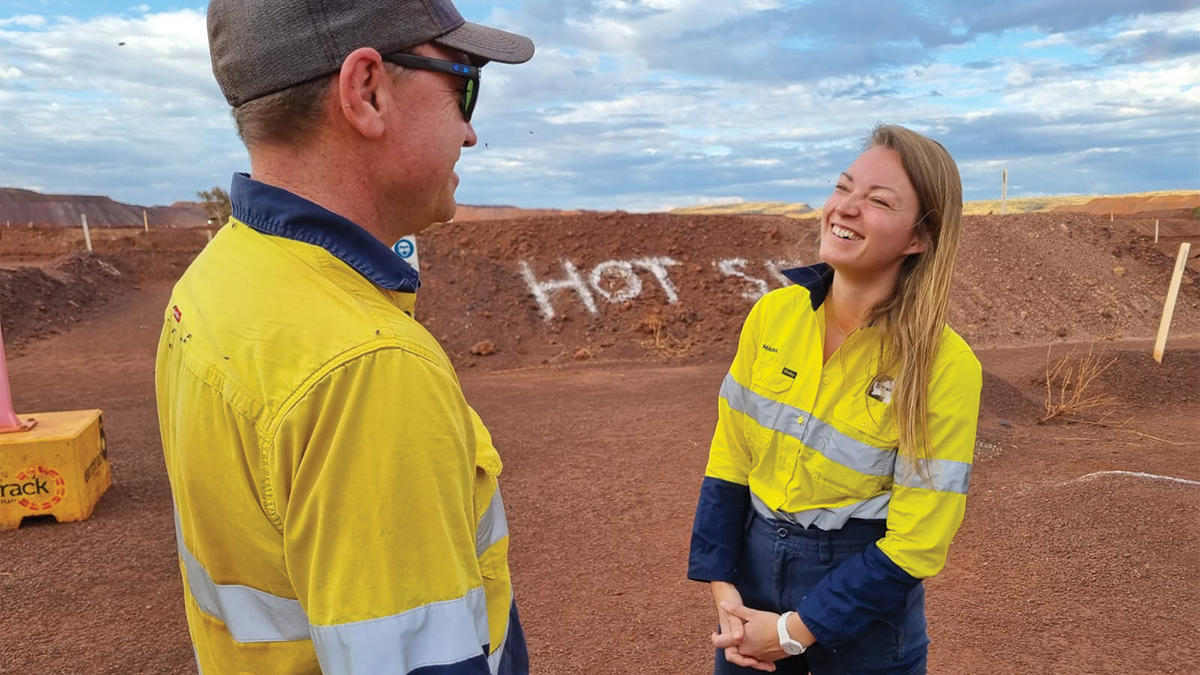 Maria Robinson knows only too well the importance of having an on-site family while working fly-in, fly-out on a remote mine site

“You have two sets of family, those on site and those at home. And for those with little children, it’s six months out of the year that they are away and missing their development, which is tough.

“We start work at 5am and you can’t really be making calls to family at that point. We’re not home until at least 6pm or 7pm, and by then of course you’re exhausted.

“But on the other side of things, the family that we have on site is so important. And I think at Roy Hill because it’s just one big mine site [in the Pilbara], there are so many people that you almost get to choose the types of personalities that you want to fit in with – which is a luxury.”

Robinson also knows that not everybody is outgoing or confident about making friends on site, which is one of the reasons she volunteered to be part of a new mental health program being rolled out at WA mining and resources operations.

Resourceful Mind is a collaboration between the Chamber of Minerals and Energy of WA and long-term partner Lifeline WA, with a pilot having already been run at Roy Hill, Mineral Resources, Woodside and Simcoa sites.

The program seeks to identify people in on-site communities who are sought out by colleagues for chats or to provide emotional support, and then equip those people with skills and tools to better navigate difficult conversations and provide guidance towards further assistance.

The Minders, as they are known, are trained and coached by Lifeline’s highly qualified and experienced Telephone Crisis Supporters.

Robinson, a truck operator, and Mark Handyside, a specialist in haulage projects and contracts, are among 79 Roy Hill team members – and 134 people across all participating companies – who are already actively serving as Minders.

“If you’ve got one or two people on site that you’re friendly with, that you can meet up with and discuss stuff, that’s great,” he said.

“But if you don’t have that, it can become a bit isolating. Not everyone is extroverted or has a good social network and those are the people who are probably most at risk.

“It’s important to have the ability to recognise when people may need some support – whether it’s someone who is usually social and well-connected but is withdrawing, or people that are new on site and not involved in social activities.

“The Minder training was certainly geared to be able to recognise that behaviour and also prepare you to have the conversations after that.”

Lifeline WA CEO Lorna MacGregor said a co-design process involving CME and the companies involved had allowed the pilot program to be tailored specifically towards mining and resources workers.

It’s hoped the success of the pilot will enable the program to be rolled out more widely to operations around WA over the course of 2022.

“We are so proud of the program and the positive impact it will make in resources communities,” she said.

“We understand that many people aren’t comfortable talking about their challenges in their life and with mental health, and we know from experience that men are less likely to ask for help.

“However, we believe workers in the resources sector may be more likely to open up to colleagues identified through the program as natural listeners, who have been trained to listen to difficult conversations and to support finding appropriate supports and help.”

Robinson, who originally hails from the UK, says she is still coming to terms with the way many people are reluctant to talk about mental health.

“Personally, I don’t know of anyone who hasn’t been affected by mental health at some point in time,” she said.

“For some people that goes all the way back to childhood and it certainly does for me – I was bullied very heavily at school.

“When you’re not sure who you talk to, you just carry it with you. And being in the adult world, is really not that different to being back at school, you just use different words.

“Things operate over here quite differently to what I was used to back home. For me, coming to Australia, people are much more shy in talking about personal issues, it’s quite closed.

“I know there’s still a stigma where men feel that they cannot talk about their feelings because there’s this perception of weakness. But it’s not just men – it goes across the board.”

Resourceful Mind aims to encourage those crucial if challenging conversations and both Robinson and Handyside say they engaged with colleagues on a wide range of issues during their time so far as Minders.

Topics have included anxiety over COVID-19, pressures around finances, general loneliness, uncertainty about employment and – very sadly – the loss of loved ones abroad during the pandemic era.

“Someone who came to talk to me had lost a parent – and because they were in another country, they couldn’t get home to be with family because of the COVID situation,” Handyside explained.

“For me, it was about listening to them in an understanding way but then also trying to set up something within the company to support them through that.

“I wasn’t trying to link them with an external agency in this instance , it was about trying to help them with taking some extra time off and encouraging them to use that to help work through a difficult time.”