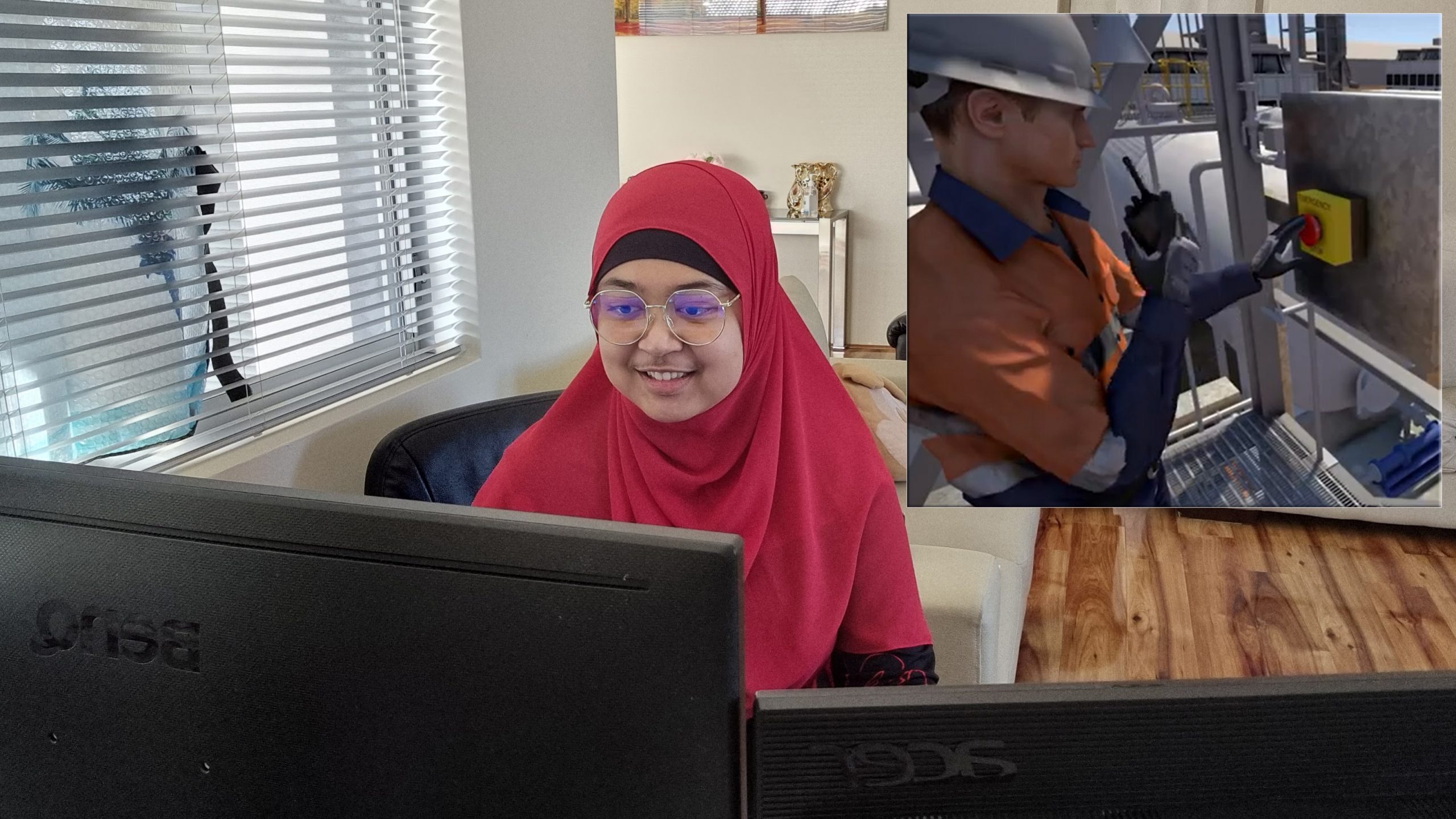 Only a few short years ago, Jihan hoped she would eventually find herself designing video games for a living.

Gaming remains something she loves. But these days it’s only a recreational pastime as she forges a career as an artist at Sentient, a Perth-based software development company that specialises in providing training, visualisation and automation solutions for mining and resources operators.

“I went to university on a games and art major, doubling up with graphic design,” Jihan explains.

“I was thinking ‘games are so cool and I want to see how to make these things.’

“I still like games and find them particularly fascinating. And being able to understand how to make them is very exciting for me.

“But working here at Sentient, I can see how my contribution actually goes out to people and makes some difference to safety or people’s knowledge by upskilling them.”

Sentient, which launched in 2000 – a year after The Matrix introduced the concept of simulated worlds to millions of movie-goers – has grown to a team of more than 40 staff and contractors, with clients around the globe and a strong focus on virtual reality and 3D interactive training.

Like Jihan, Craig was eyeing off a totally different career before he joined Sentient…in fact, he’d actually made a solid start on one.

“My background is actually as a structural engineer. After graduating from university in 2011 I spent seven or eight years designing buildings,” Mitchell said.

“But five or six years ago, I started seeing virtual reality become more adopted and I thought ‘not only do I quite like that, I can see how it can greatly benefit the construction industry.’

“So I started upskilling a little bit in the Unity Game Engine. My dad got hold of a Samsung Gear VR headset and gave it to me because he had no idea how to use it.

“Two or three years after that AR started become more prominent in industry and I continued my upskilling, including teaching myself how to code.

“Then a couple of years ago I realised I actually preferred developing in that space rather than engineering.

“So I decided to completely flip it on its head and look for a new career.”

Craig is now an augmented reality developer at Sentient, where he helps mining and resources clients with technological solutions that make life both safer and easier for workers on site.

“By placing people in a virtual environment where they can carry out potentially dangerous and complex tasks, they have the ability through VR scenario training to repeat those procedures safely over and over again,” Mitchell said.

“Not only do they feel like they retain the information better, they feel more confident when they actually go out and do it on site.

“Also, most sites tend to be fairly remote, so any way you can limit travel is going to be really beneficial in terms of saving costs.

“In the AR space, one of the main use cases for mining and resources is instructional workflows. So you can imagine an operator going out to repair or maintain a piece of equipment on site and typically having to take a big wad of information like instruction manuals.

“But through using augmented reality, be it a mobile tablet or even a headset, we can overlay information on site that is specific to what they’re trying to do.

“That could be instructions, procedures or checklists that are in their field of view in the infinite AR canvas that we like to talk about.”

Craig says people encountering AR and VR technology for the first time often find things so lifelike that they act a little strangely.

“Take the HoloLens 2 [mixed reality smartglasses] for example – because of its hand tracking, the first thing people want to do when they use them is throw things around,” he said.

“It’s incredible how many people ask if they can do that. Of course, we’ve obliged and there’s actually a demo now where people can pick up 3D objects in the scene and throw them around.

“I also find that people, when they put on an AR headset for the first time and we’ve placed 3D objects in the scene, they very naturally walk around those objects.

“Your mind plays tricks on you and you think things are actually there. It’s quite interesting to see as someone who works with the technology day-to-day because I don’t get that so much any more.”

As relative newcomers to both the software development industry and its interactions with mining and resources, Jihan and Craig say keeping an open mind is a key to finding a foothold.

“I think the most important thing is retaining your curiosity – so that when you find new things, you get really excited,” Jihan said.

“You don’t know what you like until you get there. If you have that curiosity then you have the drive to try new things.”

“I’ve certainly learnt on the job at Sentient, coming from a structural engineering background with nothing but some enthusiasm and passion and some upskilling in the Unity Game Engine,” he said.

“That’s certainly not been a barrier for me. If you come along with that enthusiasm and some understanding of what you want to do and where you want to go, that can serve you really well.”