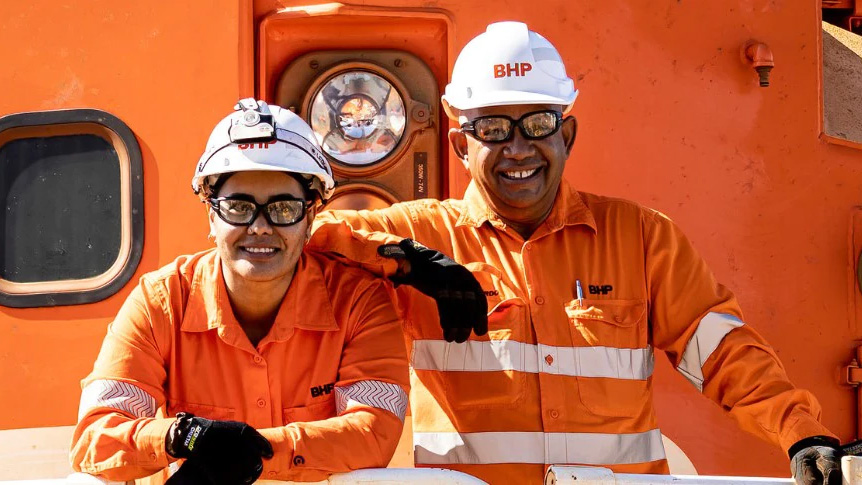 The first 60 members of BHP’s Pilbara Rail Academy have graduated – with a special father-daughter story among them.

The initial crop of trainees in the academy – in which BHP is making a a $20 million investment – included former Uber drivers, ex-military personnel and mothers looking for a career change after raising children.

One of the most compelling stories is Jewell Albert, who follows in the footsteps of her father Ricardo Dann, a BHP train driver for more than 25 years.

“Growing up in Port Hedland you drive past all these trains going to work and never in my life would I have thought I would be operating one,” Albert said.

“The reason I applied was seeing my dad and the lifestyle balance he had and how happy he was when he came home from work.”

Dann joked in an interview with The West Australian that he would now look at retiring and living off his daughter.

More than 70 per cent of the graduating trainee drivers are women and about 20 per cent are Indigenous, as BHP looks to increase the diversity of its workforce while also tackling skills shortages.

“Through the academy, we can make our business and the mining sector more resilient, create training and job opportunities in regional WA, and continue to deliver value to communities and the economy,” BHP WA Iron Ore Asset President Brandon Craig said.

There were reportedly thousands of applicants when the academy opened last year and the plan is to graduate 200 train drivers over a three-year period.

BHP’s iron ore fleet consists of more than 180 locomotives operating across more than 1000 kilometres of track, delivering ore from the company’s Pilbara mines to Port Hedland for export.

Despite its remote location, the Pilbara is actually home to one of the busiest rail corridors in the world.

To see more of the jobs available in the WA mining and resources sector, visit jobsinresources.com.au