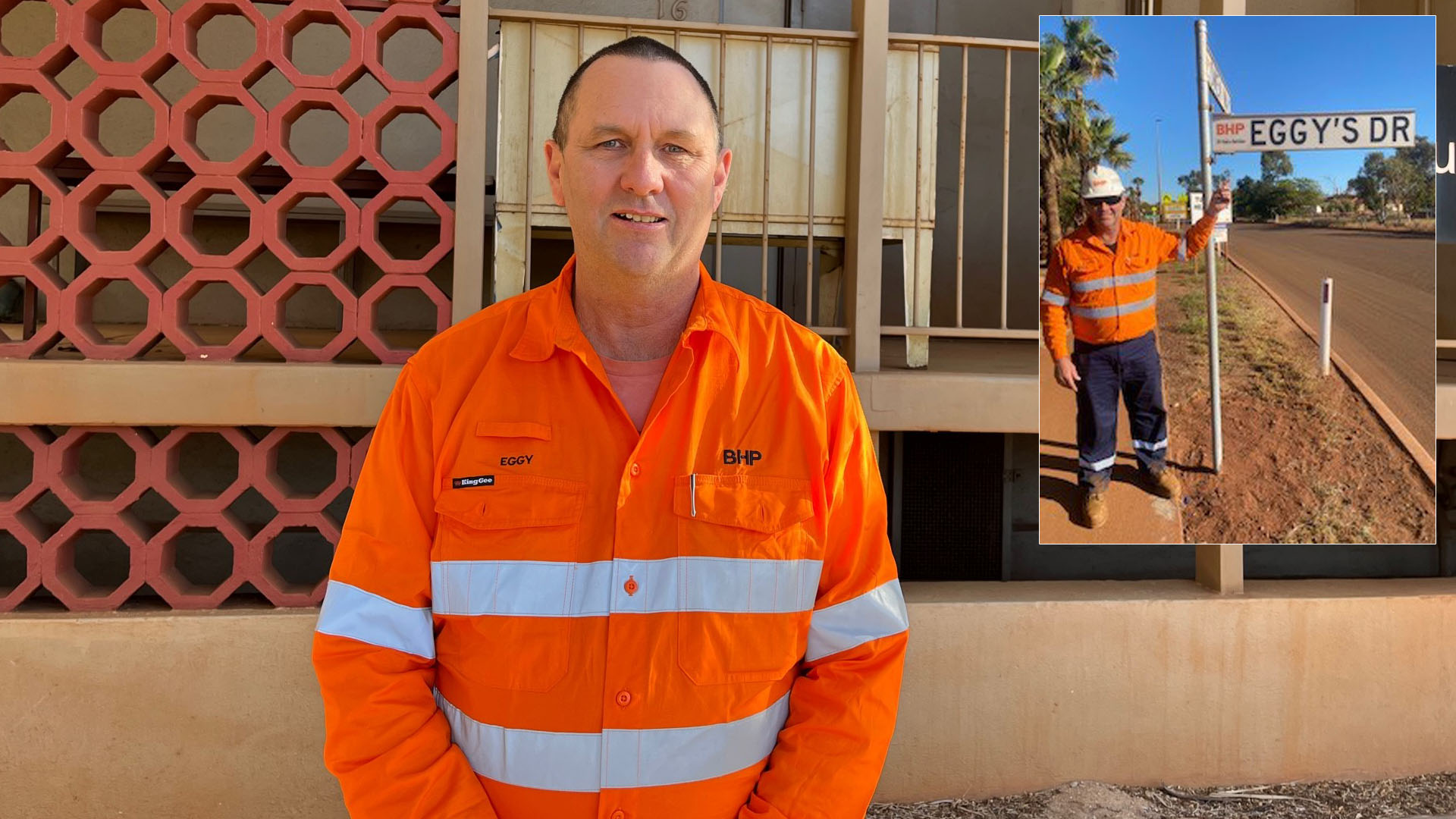 Not many people can claim to have a street named after them.

Fewer still can lay claim to having a street named in honour of their nickname.

But not so for Jeff Edwards, 55, who has earned the naming rights to a street in one of the largest mining operations in the world.

Affectionately known as Eggy among his mates, the Pilbara’s rich red earth runs deep in the charismatic family man’s veins.

With nearly four decades under his belt working with BHP Iron Ore, the small nod to his contribution to an industry that is the lifeblood of WA’s economy is well deserved.

And in a testament to the company where Edwards has carved out a career over 37 years, three of his four children have followed in his footsteps to work at BHP.

Eggy remembers when his family decided to make the move to Port Hedland from Broken Hill in 1972.

He was just five years old at the time.

In Broken Hill his father was a school principal, who was also selling insurance on the side to try and make ends meet.

The Pilbara offered opportunities for the family to get ahead and so they relocated, flying multiple legs via MacRobertson Miller Airlines to Hedland.

He recalls the family living at Dixon’s Caravan Park where he would play among the huge shady trees with the other children for hours on end.

A bus would collect his dad each day and take him to work along a dirt road, which took about two hours each way.

See also  ‘You can’t be what you can’t see’: girls flock to eye-opening Goldfields mining camp

When he wasn’t at school, there was a good chance Eggy was out fishing.

He would ride his pushbike to Finucane Island and visit his father who was now working as a control operator at the port for Goldsworthy Mining.

Eggy would then set himself up at the wharf for the night and drop a line in. All around him they were loading vessels and unloading trains. If he got hot, he would jump off the wharf and have a swim.

Edwards’ other passion was sport.  He played soccer, baseball, rugby league and did taekwondo and judo.

In adulthood he went on to coach children’s teeball and women’s softball, which is how he came to meet Debbie in the early 1990s. Debbie and her family had moved to Hedland in 1982, relocating from Bullsbrook not far from Perth.

He worked across many workshops from rail to port and even Redmont, a rail camp which is about 200km towards Newman (from Port Hedland).

Eggy recalls rebuilding a whole locomotive from the crankshaft upwards and then starting it up and taking it for a drive down track to load test it before handing it back over to rail.

During his time he also did some basic maintenance on the famous Silver Star train.

When asked about what the biggest change is in terms of doing an apprenticeship in the 1980s, to now, Eggy is quick to point out the positive change in workplace culture.

“That culture back then, it was a bit of a boys club, it was a macho thing,” he says.

“Culture is important because I have two daughters and two sons, and I want them to have the same opportunities and be treated right”

When asked if he ever considered leaving Hedland, Edwards shakes his head.

“You go on holidays to the Gold Coast and you see all the sugarcane and the green stuff; or when you go down south to Albany or something and it’s beautiful and cold and you think, ‘oh, it could be great to live here’.

“Then you come back and get back into your routine and you think well, it’s not always greener on the other side.

“You have a lot more opportunity here if you want to take it and go for it. In the industry, you can do whatever you want to do.”

Eggy and Debbie went on to have four children – Kane, Taylah, Kyle and Hayley – who have grown up in Hedland, and their childhoods have echoes of their dad’s.

They have all gone to the same high school that Eggy went to and play the same sports, including baseball which their father only recently retired from playing himself.

They also share a love for fishing, boating and camping.

Three of them have gone on to work for BHP while the other is a completing a heavy diesel apprenticeship at Wedgefield.

But while Edwards has enjoyed his career at BHP, it was not something he sought to impress on his children.

Instead, they were left to make that decision for themselves.

“I was always very impartial and told them to do whatever they want and that we would support them,” he says.

See also  'We want to be the fence at the top of the cliff, not the ambulance at the bottom'

“Think about it, come and talk to us when you want to do something and we will give you advice, whether you listen or not, it’s up to you. “

Like Edwards, the adult children are happy in Hedland. Eggy and Debbie have a large block on the outskirts of town which acts as a meeting ground for their adult children and three grandchildren.

“Every single day I go home, one of the kids will be there with the baby, the grandkids or whatever,” he says.

“I often come home and they’re either in the pool or cleaning a boat or cutting up fish, it’s a good lifestyle.

“I have no plans to go anywhere else”

So what is it that keeps Eggy turning up to work each day?

“I feel really connected to it and understand that our team is a focal part of that,” he says.

“We want people to stay in the business because it is a good place to work. We need to retain our people.”

Today Edwards works as the Lead Production for Operation Readiness and spends some of his time providing site tours, thanks to his wealth of knowledge.

He loves showcasing the business, where he can marry up his love of sharing the history of the town and his experience growing up in Hedland as a young lad, with the massive operation of today.

“I enjoy coming to work, I enjoy learning and being involved with the business,” he says.

“I take people on tours, take them to the ship loaders, car dumpers and enjoy doing all that stuff.

“I wear this shirt because I have a street sign I see as soon as I drive in that’s named after me and I drive down that road each day.”

Fittingly, Eggy also has a replica of the street sign located at Nelson Point that he has installed on his driveway, so he gets to see his name a couple of times during his daily commute.