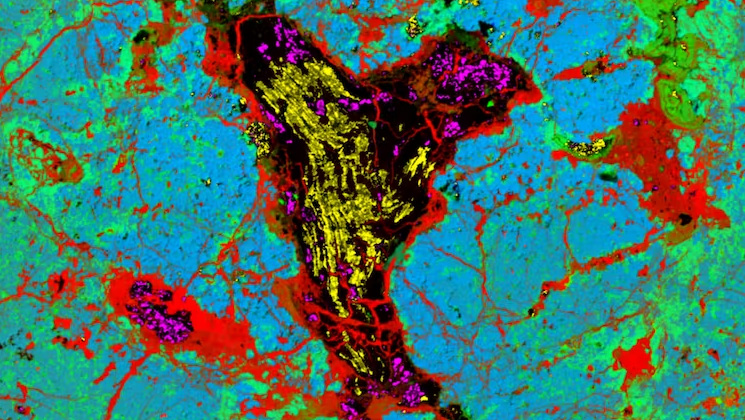 Meteorites originating from a dwarf planet that was likely destroyed more than 4.5 billion years ago might not seem to have much to do with modern mining…but they could well have big implications for its future.

That’s the conclusion of researchers from the CSIRO, who were part of a team studying a substance called lonsdaleite found in a rare group of meteorites known as ureilites.

The existence of lonsdaleite – named for Kathleen Lonsdale, one of the first two women elected a Fellow of The Royal Society – has been known about since 1967. Often found in meteorite debris, Lonsdaleite is an allotrope of carbon just as diamond is, but has a hexagonal crystal structure rather than the better-known cubic one.

Lonsdaleite has been recorded to be up to 58 per cent harder than diamonds and was in the news in late 2020 when an international team of scientists, including Australian researchers, surmised that they had found a way to create it at room temperature with high pressures.

But the study results announced this week – a collaboration between the CSIRO, RMIT University, the Australian Synchotron and Plymouth University – offer some of the clearest evidence yet of how lonsdaleite is formed in nature.

The science-minded among resourc.ly’s readership might like to read the CSIRO media release for a clearer picture of exactly what the research involved (there’s also an excellent explanatory piece on The Conversation)

But at the core of the theory is that the ureilites most likely came from the mantle of a dwarf planet or very large asteroid that was destroyed 4.56 billion years ago in a giant collision.

An electron probe microanalyser was used to map distribution of graphite, diamond and lonsdaleite in the ureilite samples and, combined with high-resolution transmission electron microscopy, helped identify the largest lonsdaleite crystallites to date (up to one micron, or one-millionth of a metre).

“We propose that lonsdaleite in the meteorites formed from a supercritical fluid at high temperature and moderate pressures, almost perfectly preserving the textures of the pre-existing graphite,” Professor Tomkins said.

“Later, lonsdaleite was partially replaced by diamond as the environment cooled and the pressure decreased.”

If you’re sitting there wondering what all this potentially has to do with mining, then the answer is simpler and much less scientific than you might think.

Industrial diamonds are often used in mining and resources operations as abrasive materials on cutting wheels and drill bits. They are prized for their hardness and, needless to say, a key ingredient of the diamond drilling that is so integral to exploration for minerals.

Which is precisely where researchers hope their recent discoveries about the origins of lonsdaleite might come in handy.

“If something that’s harder than diamond can be manufactured readily, that’s something industry would want to know about,” CSIRO scientist Colin MacRae said.

There are already strong, pre-existing connections between mining and meteorite impact zones, with South Africa’s Witwatersand Basin and the associated (and gigantic) Vredefort Crater linked to the proliferation of gold deposits in the region.

See also  Turning waste into taste in the Pilbara

In 2020, Ora Banda in the WA Goldfields made headlines when an exploration team drilling for gold uncovered evidence that pointed towards the existence of a previously undiscovered crater – around 100 million years old and up to 5km wide.