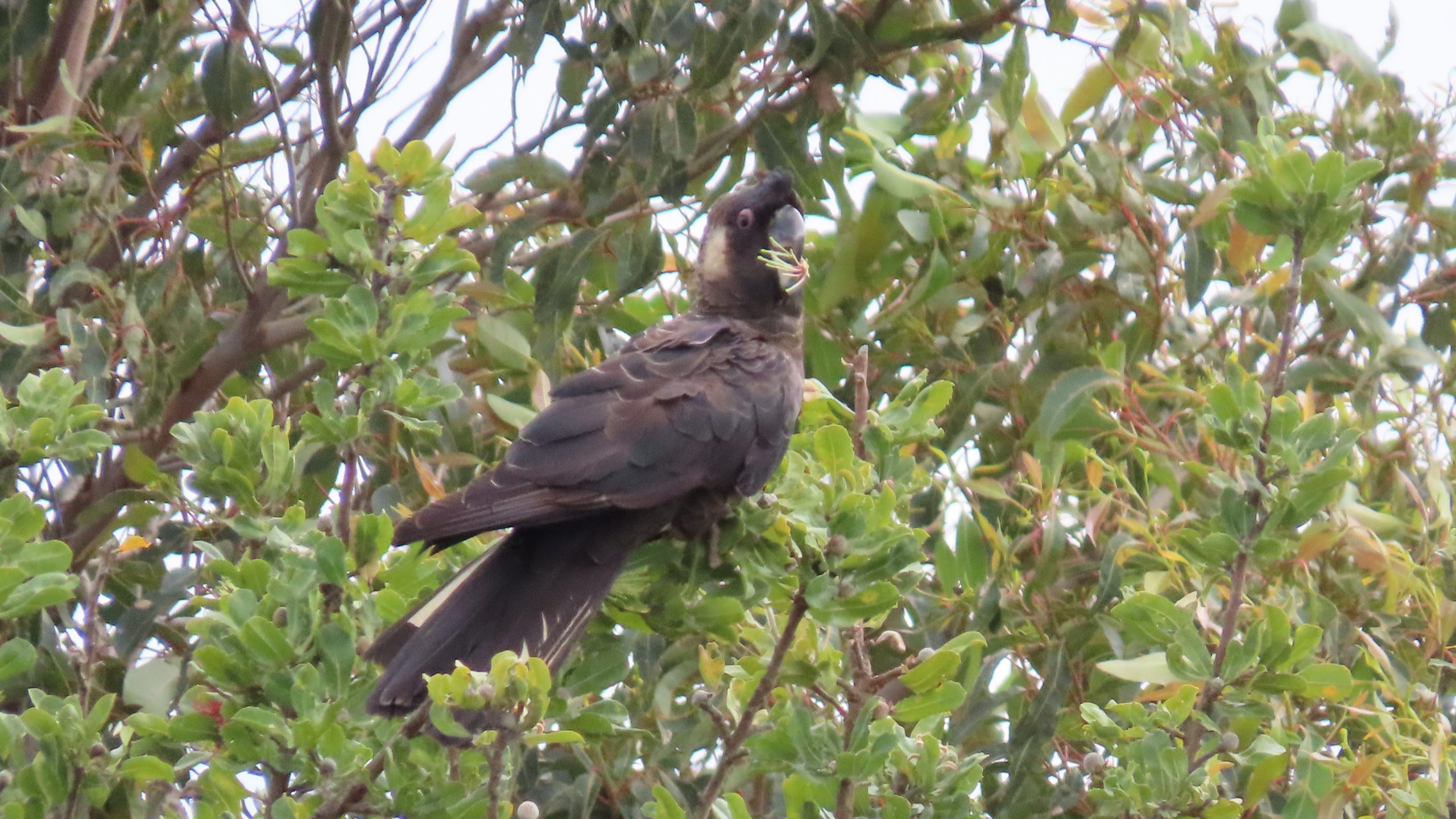 Only a few hundred metres off a busy highway north of Perth, lies a small parcel of woodland that is vital to learning more about and preserving one of WA’s most-loved but also endangered birds.

The location is Cataby, about 150km north of Perth. The trees are a remnant of the wandoo woodland that once covered large portions of WA, from Geraldton to south coast. To the west sits Iluka’s mineral sands mine, to the east is the Brand Highway.

And the bird which Murdoch University PhD student Zoe Kissane is searching for in a tree – using a camera attached to a telescopic pole – is the Carnaby’s Black Cockatoo.

“They are quite a gregarious and loud bird and a lot of people know them for the mess they make and the noises we hear from them,” Kissane explained.

“But there’s still so much we don’t know about their movement, ecology, what they are doing while they are breeding, what pieces of habitat might be really important to help sustain breeding populations ,and also where they go and what they do post-breeding.”

The Cataby mine, which opened in 2019, is Iluka’s newest in WA and was approved on the condition that permanent 180-hectare conversation covenant is created around Cataby Brook to ensure the ongoing health of the Carnaby’s Black Cockatoo population that frequents the area.

Artificial nesting hollows have been created specifically for the Carnaby’s Black Cockatoos and there is a long-term plan to return the land, which has previously been used for farming, to a state as close as possible to the original wandoo.

“The artificial hollows are really important because the natural hollows take so long to form,” Iluka revegetation and closure specialist Scott Talbot said.

“With fire regimes and the like, we’ve lost some of the trees [over time[] so the quickest way to reinstate habitat is to provide an artificial hollow for the birds.

“There’s so much competition from other birds and bees and the like and the artificial hollows give them more options.

“The particular artificial hollows that we use are poly tubes and they include a scratching post that means they’re designed more specifically for Carnaby’s and help exclude some competitors.

“This particular area the wandoo trees are 300 or 400 years old and it’s part of a very small catchment and very unique.

“Before mining this was farmland and cattle would come down to the creek and graze here. You can see the weeds intruding.

“Once we’ve established a covenant here you’ll see the weed load minimise, new plants growing and old plants that were once here, like orchids, coming back and re-establishing themselves to create more habitat.

The longest journey recorded for a Carnaby’s Black Cockatoo is around 200km, so they aren’t the most migratory birds from a distance-travelled perspective. But it’s also extremely important for their conservation to find out as much as possible about migratory patterns, including when and where they are moving.

That’s where Murdoch researchers come in, along with some nifty solar-powered GPS and satellite tags that have been attached to a sample of the birds.

“The GPS tag gives us actual data of where the birds have been while the tag is on their back. While they are in the breeding ground I have a relay field set up in some trees and essentially the GPS data downloads to my computer and I can look at the tracks of where the bird has been.

See also  The electric plane revolution may already be upon us

“Once they leave the breeding ground, if they still have the tag on them I can follow and aim to find them at a night roost or early in the morning and set up a temporary relay field and download that data as well.

“The satellite tag gives us wider spatial movement data in terms of their roosting post-breeding ground.

“So each tag does a slightly different thing but our hope is that the GPS tag stays on as long as possible because that’s the really golden data.”

While the involvement of Murdoch with Iluka’s cockatoo conservation activities is relatively recent, Western Australian Museum has been visiting the Cataby breeding ground since 2003.

Ron Johnstone, who is a research associate at the museum but was previously its Curator of Birds for 49 years, has been studying Carnaby’s Black Cockatoos for the best part of 30 years.

“The whole centre of gravity of Carnaby’s distribution and breeding distribution has moved westwards and southwards over the past 50 years,” Johnstone said.

“And that’s something the museum has been monitoring. We have a huge historical database.”

Johnstone said Iluka had been an ideal partner to work with on cockatoo research.

“They’ve been marvellous with their environment management, particularly rehabilitation,” he said.

“We have worked with Iluka to carry out research at their operational sites at Eneabba, Cataby and Capel and…and we’ve been able to expand our cockatoo research project to include species right throughout the south-west corner.

“Iluka have had some exceptional environmental managers over the past 20 years and recently people like Scott Talbot have been really passionate about the environment. Their rehabilitation work at Eneabba [Kwongan scrub to the north that provides a foraging ground for Carnaby’s] is outstanding, probably the best in the State.

“The Cataby breeding area for Carnaby’s is very small and last year I think we only had 19 pairs breeding in that area.

“It’s a great place for us to experiment with artificial nest hollows…and it’s the only patch of wandoo and York gum in that vicinity. It’s quite a unique situation.

“These are birds that don’t breed until three or four years of age, they mate for life, they have very strong pair bonds and they return back to the same nesting highs in these ancient, veteran and stag trees.

“One of the great aspects of Cataby has been that the nests there are quite easy to access.”

Talbot says the Carnaby’s Black Cockatoo population at Cataby has shown no signs of decline and that data suggests it’s actually improving since the introduction of artificial hollows and competition control.

He said one of the highlights of the monitoring project was working with birds that were “so cool.”

“I find them almost a bit prehistoric – they have a very long lineage and when you hold a chick it’s almost like holding a little dinosaur,” Talbot enthused.

“They’ve got this extraordinarily large beak, these pin feathers and this fat little belly. They’re really quite cute.

“And certainly the adults are quite communicative. The other black cockatoos I don’t think have as broad a vocabulary but the Carnaby’s you can really pick out the different conversations going on.

“It’s quite intriguing and I wonder what they are saying sometimes.”