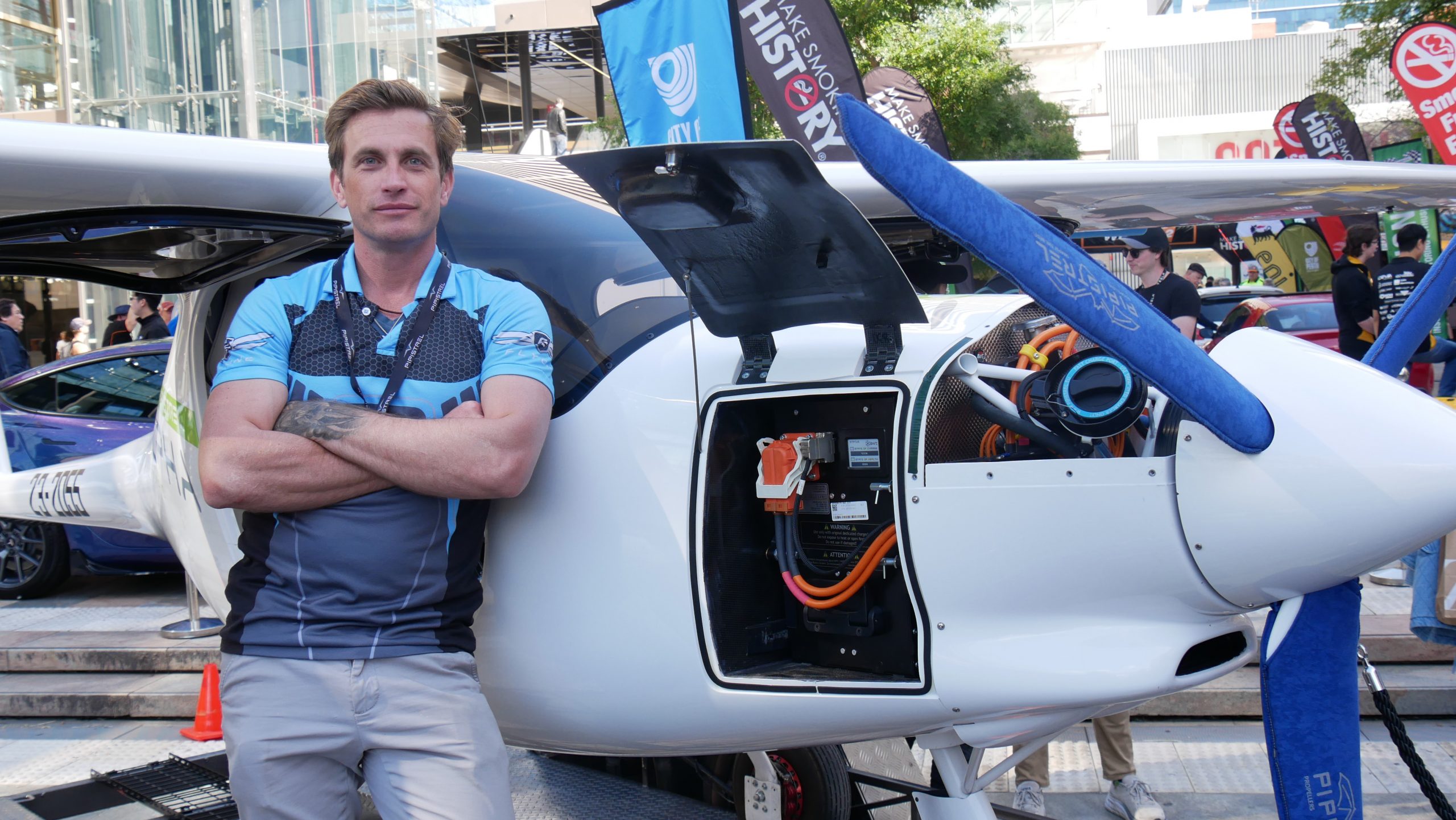 It’s a sunny spring afternoon and a healthy crowd is checking out a variety of top-end electric vehicles in Perth’s Forrest Place.

But one of the EVs isn’t like the others.

To start with the name of its manufacturer, Pipistrel, is likely unfamiliar to all but a small percentage of people. It also has wings and is capable of flying for up to 90 minutes.

Welcome to the world of electric aviation, where Korum Ellis and his WA-based start-up Fly On E are working to not only find a niche but be part of the transformation of an industry where internal combustion has been a staple since the first forays of the Wright Brothers.

“In the next couple of years there are going to be some amazing general aviation, full commercial grade electric aircraft in four and five-seaters, that will be available.

“We’ve got distribution partners with a couple of those developers already. And then the one that everyone wants to see is the flying car-style eVTOL aircraft, which are also very close to market – we might start seeing those in 2024.

“That’s the electric vertical takeoff and landing aircraft. It’s a really sci-fi idea but it’s right on our doorstep and really starting to happen.”

People might need a bit of convincing about the impending arrival of Jetson-mobiles but they can already get an introduction to electric aviation over and around Perth courtesy of the Slovenian-made Pipistrel Alpha Electro that Fly On E operates.

The company offers a range of services, from introductory flights up to 12-month pilot courses and all the way up to 20-hour packages.

“It’s a very good bit of kit – all carbon-composite design, with a 60kW motor and 21kWh of battery storage,” Ellis said.

“It’s nice and easy to fly, is designed specifically as a trainer aircraft, isn’t intimidating and is really good for people to learn and understand the fundamentals of aviation.

“A typical flight training lesson regardless of what flight school you’re with and what type of aircraft you’re flying is about 50 minutes. And this will do 60 to 90 minutes of flight time, piece of cake.

“You can read a lot on paper [about the plane] – you can see all the specs, see the cost benefits and understand the emissions reduction.

“But what surprises people most when they come and fly in the plane for the first time is the glassy flight experience they have…there’s no vibration and there’s no reciprocating engine to shake the fuselage on power up. It’s just a smooth power delivery like an electric car.

“Your typical flight training plane at a flight school is maybe 30 to 40 years old, like a Cessna 152 – and they stopped manufacturing that in 1985.

“They’re all quite tired and old and loose and rattling, and they roar and smell like fuel. Then you jump in this thing and it’s quiet, it’s smooth and there’s no vibration through the chassis.

“That flight experience blows people away.

“It’s like the difference between driving a Kombi and a Tesla. It’s chalk and cheese.”

The prospect of widespread, mass-scale commercial electric aviation remains out-of-reach for the immediate future – a by-product of the amount of energy-density that can be packed into batteries and challenges involved in getting them to power bigger and heavier planes.

As Ellis notes, solving that riddle is likely to depend on some advancements in hybrid hydrogen-electric technology or developments in biofuels.

But he’s convinced very real but smaller-sized opportunities are just around the corner, including for the mining and resources operators needing to move small groups of people or pieces of kit.

“There’s a lot of fuel consumption in light sport and recreational aviation and light commercial aviation,” he said.

“The petrol counterpart of our aircraft is a little guzzler, it’s sucking down 20 to 30 litres of fuel an hour. In a light sports aircraft, it’s usually just the one or two people in the plane consuming a lot of fossil fuel.

“The general [electric] aviation products coming out are going to start opening things up to people who need to move personnel, parts or emergency patients – and that’s going to really be the breakthrough that starts making electric aviation a little bit more mainstream.

“When people that need instant, fast, cheap and decarbonised transport can access something that can fly 300km to 700 km – which the next generation of aircraft will be able to manage – then we’ll be able to start running more commercial operations and these low-cost, high-comfort electric aircraft will actually start nibbling away at things.

“There will be a lot of value to be had for an on-demand micro-charter style aircraft operator to come in and chip away at some of the scheduled flights, which are non-decarbonised and using pretty non-green methods of propulsion.”

Right now, Ellis has his sights set on establishing a charging network that will allow electric aircraft to fly from point-to-point around WA and, eventually, across Australia.

Next stop on his agenda is WA’s favourite holiday island.

“Like the early EV market, one of the biggest limitations of an electric aircraft is having a charger to fly to, charge and then come back,” he said.

“If you bought an electric car five years ago, you had to drive home to charge it. You couldn’t drive somewhere, charge it and then come back.

“Our next line of sight is Rottnest Island. We want to get an electric charge node on Rottnest to link all three charge sites for this aircraft and the next generation as well.

“And then we’d be able to run electric operations with future commercial operations at that site. It would be a really good proof of concept and proof of viability for electric aviation.”

Like many entrepreneurs, Ellis admits to being a lateral thinker – and his career has involved some intriguing pathways.

He’s been a model and actor, an importer-exporter of vehicle electronics and was managing director of Audiocom Mobile Electronics, before selling out of the business earlier this year.

Ellis still operates electric bike hire company RideOnE – his first foray into electric transport – but before that he invented a self-watering organic household horticulture system and, perhaps most interestingly of all, was a candidate for the proposed Mars One mission to settle the Red Planet.

“There have been some spicy times over the years for sure – and I’ve always been interested in cutting edge frontier tech,” Ellis said.

“I got right behind the Mars One program, I loved the idea of a scientific outpost being established on Mars and the biggest way I could contribute at the time was to be a potential candidate.

“I learned a lot through that process and had a really good time. The project didn’t really catch at the time, it was a little bit early and the costs were a little bit high.

“But I think the plans they had were completely viable and might yet take hold really soon…we all know Elon Musk is building some very big rockets with the sole purpose of making interplanetary travel real.

“In our lifetime we’ll probably get to see people on another planet.”