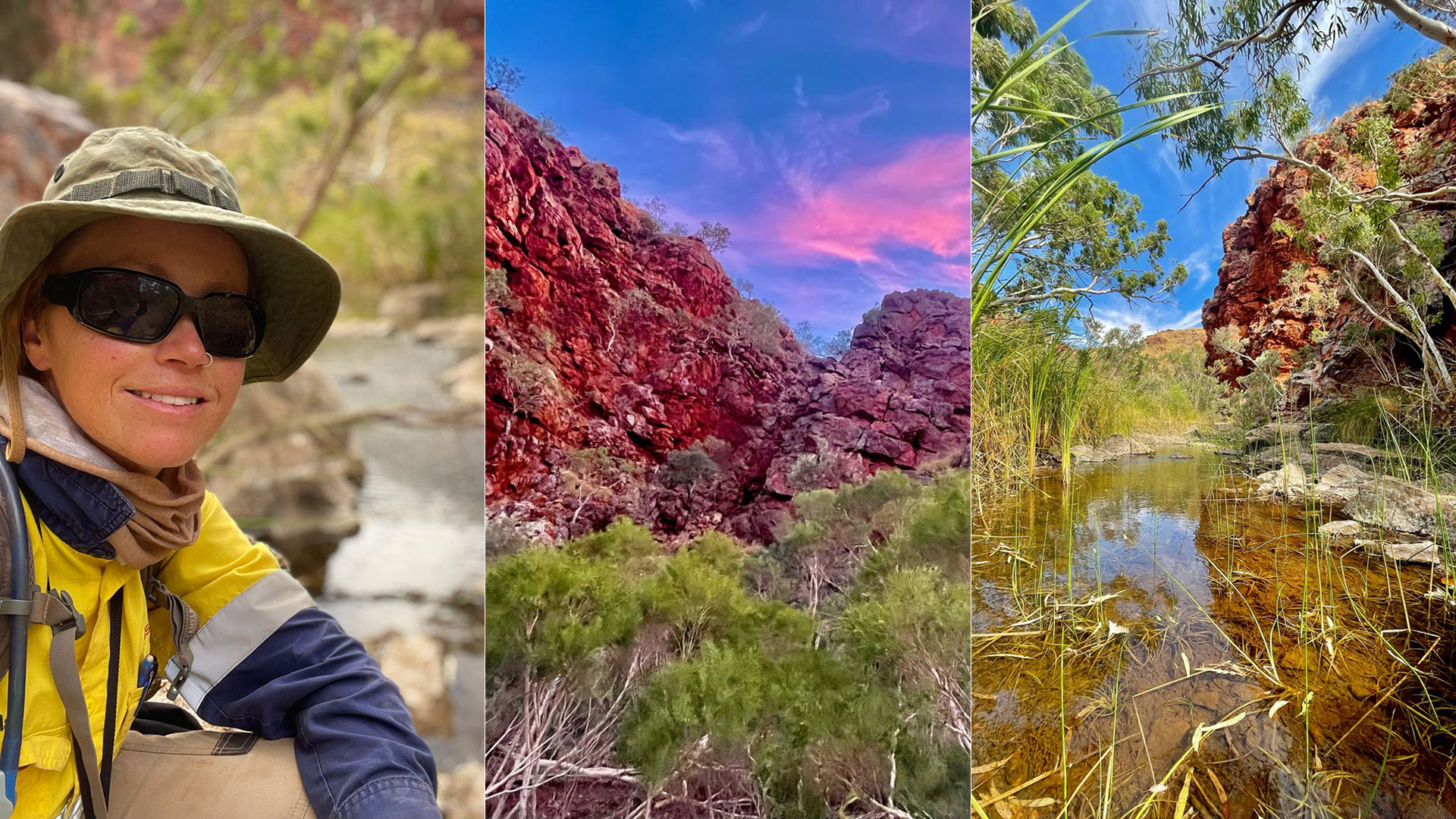 There’s a certain amount of irony to the fact Kyla Pannell enjoys a job that can take her into the WA wilderness for nearly two weeks at a time and cumulatively for up to a third of the year.

To start with, she didn’t really have much of a childhood interest in science, which is now at the heart of the role she loves.

And secondly, there is the quirk that her very much outdoors-based career owes part of its existence to a rather “un-outdoorsy” platform: Google.

“I wasn’t too sure on what career I wanted after school but I had an interest in national security which was definitely influenced by 9/11 and the global climate at the time. So I initially undertook a Bachelor of Counterterrorism, Security and Intelligence,” Pannell explained.

“I never considered a science career when I was younger because I actually didn’t like science at school! It wasn’t until years later when I started working in horticulture that I rediscovered my love for nature and became curious about how nature worked.

“I also realised I wanted a career working in the natural environment and not landscaped gardens, as beautiful as they were. However, I was totally clueless about environmental career pathways so I Googled it.

“The images I saw were of botanists working on iron ore projects in the Pilbara. I never knew that a career like that existed and it really excited me. I thought to myself, ‘this is my dream job’.

“From then on I had vision of myself working in the Pilbara doing environmental science and that vision inspired me to go back to university and complete a second degree. It’s really fulfilling to have that vision become a reality but it wasn’t without great sacrifice, hard work and dedication.”

So instead of spending her days mapping out potential threats to Australia’s security, Pannell – now a qualified environmental scientist and botanist – finds herself plotting out the unique and diverse vegetation across WA’s varying landscapes.

Her role at Perth-based environmental consultancy Ecoscape has taken her to the South West, the Wheatbelt, the Murchison, Carnarvon, the Kimberley, the Swan Coastal Plain, Yalgoo in the Mid West and the Esperance Plains.

But there’s one region that stands out above the rest.

“I get really excited when I get to explore the wild and record the incredible plants and vegetation communities I encounter. WA truly has some of the most unique and interesting plants in the world,” Pannell said.

“On a more personal note, my favourite thing about being out in the bush is that it allows me to disconnect from society. I find it incredibly freeing and restorative to explore the natural world.

“I’ve always had a strong connection to nature and I’m very fortunate that my job takes me to the most beautiful, remote places in Western Australia.

“I love all parts of WA but the Pilbara is easily my favourite place to work. The Pilbara landscape has this ancient, prehistoric charm to it. When I’m walking across the stony flats or climbing the mountains of the Hamersley Range, I feel like I’ve been transported back in time.

“The plants are weird and wonderful, the environment is harsh and threatening, and little pockets of paradise are scattered throughout the landscape like oases in the desert.”

Much of Pannell’s field work relates to the WA mining industry, either undertaking botanical surveys to support approvals processes for proposed developments or conducting monitoring as part of operational compliance programs.

With the WA mining and resources scene currently a hive of activity, that can involve a range of commodities such as iron ore, nickel, magnesite, gold and copper, and increasingly it also relates to renewable energy projects.

Field trips can last up to 13 days and during busy times they can go back-to-back, meaning Pannell sometimes spends weeks away from the office.

“A typical day in the field involves a 12-hour shift – that’s usually 6 am to 6 pm but we also work at night for certain monitoring programs,” she said.

“Fieldwork is generally quite remote both in terms of where we are based – operational mine sites, mining exploration sites, country towns or outback roadhouses – and where we undertake job-specific tasks.

“I often find myself walking long distances through the bush, traversing gorges and gullies, climbing hills and mountains, walking up and down creeks and rivers, and 4-wheel driving along remote tracks.

“The survey work we do involves quadrat-based sampling of vegetation as well as undertaking targeted searches for conservation-listed flora – basically, I record plant species and describe vegetation communities for a job. The monitoring work is variable and includes vegetation health assessments, weed monitoring and rehabilitation monitoring.

“There’s never a dull day in the field and every project is different which makes it exciting.”

And thanks to the wonders of technology, Pannell is able to share that excitement widely with others.

The avid photographer and videographer is developing a strong following on LinkedIn, where her pictures and vision showcase WA landscapes that some of her followers probably won’t ever get to see in-person.

After starting out taking photos of karri forest in the South West with a DSLR in her late teens, a Go Pro is now Pannell’s go-to for profiling WA’s stunning environments.

“Taking a photograph of a special place or an interesting thing is very therapeutic for me,” she said.

“Photography helps me to be truly present in the moment because I focus on all the complexities of nature that come into the frame.

See also  How an unexpected cadetship opened up the world

“I share photos and videos of my job for two reasons. One is that I hope to inspire others to appreciate nature and I especially hope to inspire West Aussies to appreciate their own backyard. And the second is that I’m aware that most people will never see the places I see and so I feel a responsibility to bring these places to people through the lens of social media.

“I’ve seen so many amazing things but if I had to choose one I would say gorges in the Hamersley Range. Some of the gorges in the Hamersleys are just mind blowing. They can only be described as paradise. Some contain beautiful waterfalls that have carved their way through the rock over time, others contain deep pools shaded by large trees.

“Even my photos do not capture the true beauty and serenity of these magical places.”

Given her job involves spending days at a time in the outback, often walking in mangrove swamps and through grass that reaches at least waist-high, it seems natural to wonder how Pannell copes with the potential for stumbling across reptiles of the legless variety.

But she says snakes are actually the least of her worries.

“It’s accidentally walking through giant spider webs that get to me!” she said.

“Oddly enough I’ve only ever seen a handful of snakes in my travels and mostly along roadsides. But we do wear protective gaiters and we are trained to deal with snake bite emergencies.

“I used to get nervous walking through tall grass but you build a tolerance to it out of pure necessity. My job requires that I walk through the bush so I just accept the fact that I may see a snake and definitely will get spiders on me.” 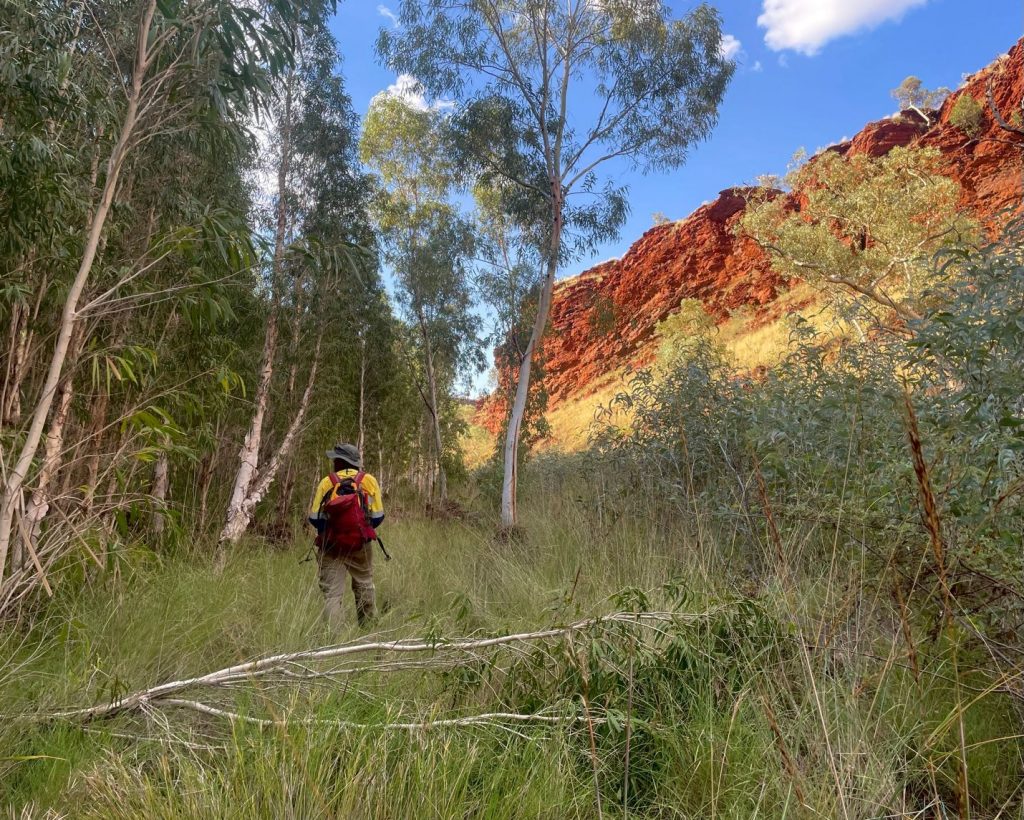 You can follow Kyla Pannell’s photography – and adventures! – on LinkedIn.

If you’re interested in working in the WA mining and resources sector, visit jobsinresources.com.au