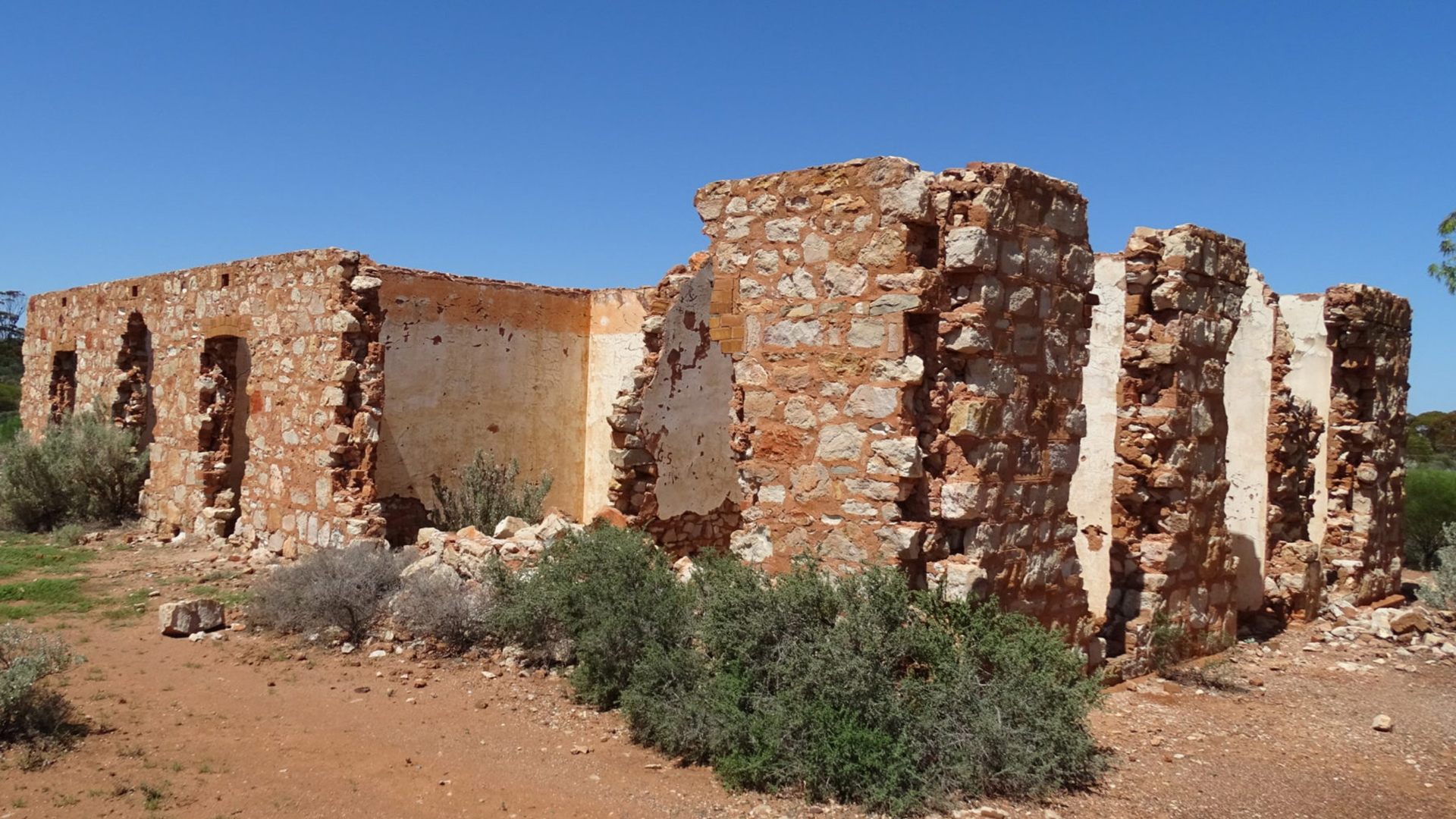 To the modern day consumer, the concept of eating a counter meal at a pub is hardly radical – in fact, we’re so spoiled for choice that you’d probably be disappointed if an establishment didn’t provide the option.

A century ago, however, it was a different story. And the crumbling walls pictured above are all the remains of the Premier Hotel north of Coolgardie, which was one of the first pubs in Australia – and quite possibly the very first – to offer meals at the bar.

Kunanalling, where the Premier Hotel was located, was originally known as 25 Mile (its distance from Coolgardie).

On its foundation in 1896 it consisted of four streets (Balfour, Chamberlain, Gladstone and Salisbury) and featured a large post and telegraph office with quarters, a police station and courthouse with quarters, a school and residence, a Mechanics Institute, three stores, two bakeries, a butchery, a tobacconist and newsagency, and a pair of hotels (the 25 Mile and the Royal).

Harry Ware, a noted Goldfields historian who captured the life and times of many of the towns in the region that popped up during the goldrush era, wrote that Kunanalling was a strong contributor to gold production.

The first mining lease in the area was “True Blue”, which was pegged out in 1893 about two miles east of the town site. Ware’s History of Kunanalling, published in March 1954, reports that was followed by a string of other lease applications: “Sunbeam”, “Premier”, “Brevier”, “Miner’s Dream”, “Daddy”, “Sovereign” and “Blackett’s Brilliant”

See also  Chris and Tahra love their work in mining (even if it's not your cup of tea!)

While a variety of mines around Kunalling enjoyed some success, the most noteworthy and biggest of them was Premier. It had 25 head stamps used to crush ore, a large cyanide leaching plant and a filterpress for slimes treatment, and for a long time was managed by Captain Benjamin Bryant, a Cornishman with experience in the UK in copper, tin, lead and silver mines.

Perhaps most crucially in the context of this story, the Premier mine supplied electricity to its namesake hotel, which was one of the first in the Goldfields to boast such power and had been established in 1901 by Coolgardie entrepreneur Fred Bow.

With its 10 bedrooms, big parlour, billiard room, keg cellar and large kitchen, the Premier Hotel survived the demise of the Premier Mine in 2004 and continued operating until 1942. In the 1920s it was taken over by the Kelly family and ‘Gran Kelly’ not only put ice cream on the menu but is said to have been the first Australian publican to offer counter meals at the bar.

Beyond the Premier, a number of other mines around Kunanalling enjoyed some degrees of success.

“True Blue” morphed into “Blue Bell” after a partnership dispute and eventually became the only public crushing plant in the district, treating 23,000 tonnes of ore over the 23 years that it was in operation.

Meanwhile the “Sydney Mint” was a consistent producer of good grade ore, a specimen of which was bought by the WA Government and presented to the then Prince of Wales – later to briefly become King Edward VIII – during his Australian tour of 1920.

Like many of the towns that sprang to life during WA’s early goldrushes, Kunanalling “boomed” at times and its 1898 population of 360 people at one stage reportedly grew to about 800.

But it wasn’t sustainable, even with a 1930s spike in gold prices. The Mechanics Institue was destroyed by a wind storm around 1913, the school closed in 1927 and became a farmer’s homestead in Tammin, and the police station was pulled down and used to house the plaster works at Yellowdine. The post office was first turned into a hall, then became a school in the 1930s when the population swelled, and eventually became a hall again…only this time in Widgiemooltha, south of Kambalda.

These days all that exists of Kunanalling are the ruins of the Premier Hotel – those crumbling walls and the remains of the pub’s three prominent chimneys.

And, of course, the ghost of counter meals past!

This story was put together with the assistance of the Eastern Goldfields Historical Society and referencing online accounts of Kunanalling’s history – including this excellent blog piece.

The main photo on this story is from the Our Gems website.