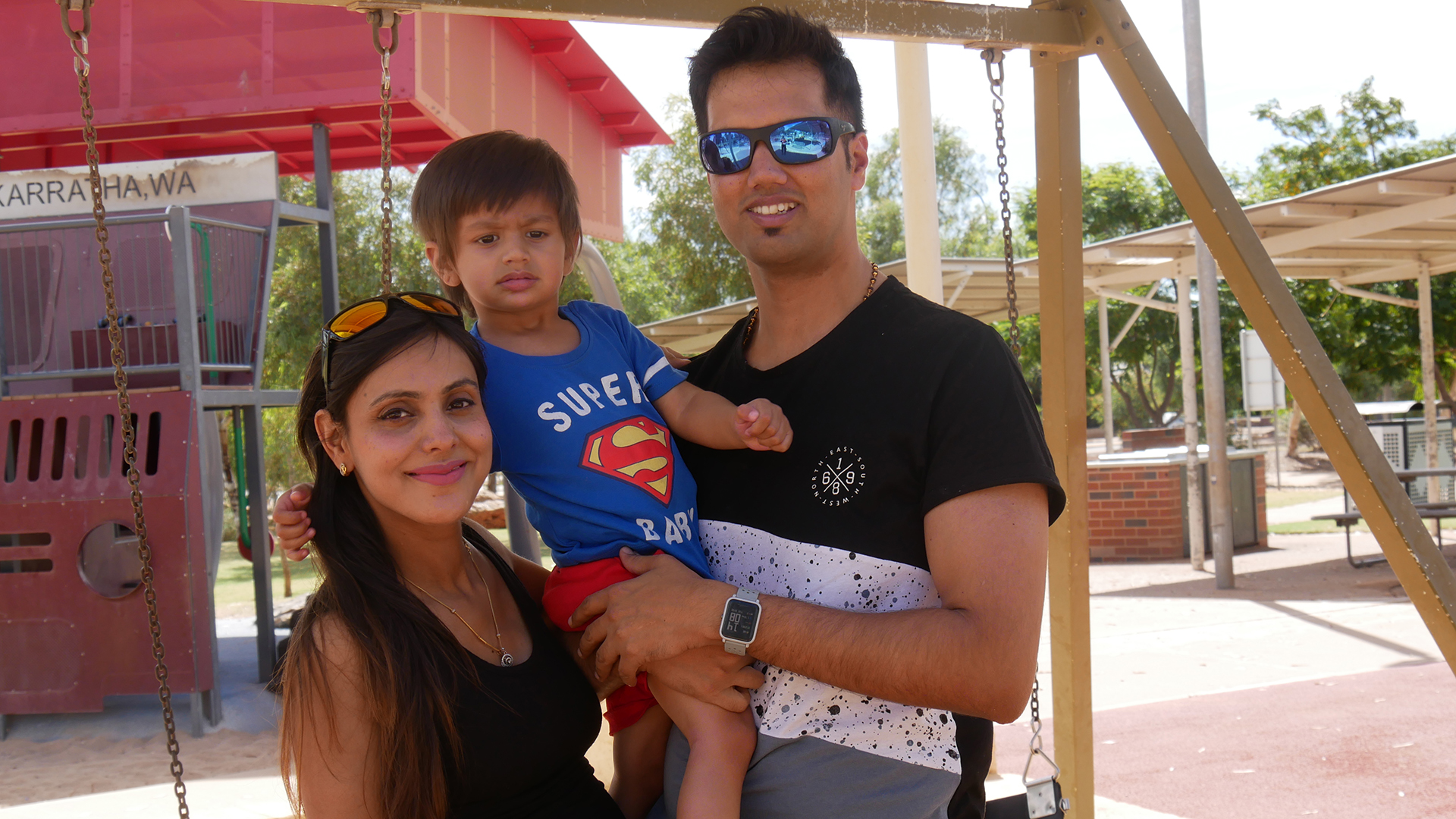 In early 2020, as the COVID-19 pandemic continued to spread across the world, Aditi Malik and her husband Abhishek Goel had plenty to think about.

Having moved to Western Australia less than a year earlier and with the arrival of their first child only months way, they were acutely aware of being thousands of kilometres from their families with no end to border closures in site.

In short, the couple wondered how they might cope.

“No one was really sure how bad things might get,” Aditi recalled.

“It was the first time that we realised we were so far away. We weren’t going to be able to cross borders or go anywhere.”

Fast forward a little more than two years and Aditi and Abhishek have a second child on the way. With the grips of the pandemic easing, they have been able to travel back to India with their son Viraaj and are only days away from having family visit them in the Pilbara.

In many ways they are a poster image for the lives and community connections that can be forged in the humming coastal town of Karratha.

“There’s so much support from the local hospitals, local nurses and other groups which taught us that it’s not that hard to raise a kid by yourselves,” Aditi said.

“I have a friend who has triplets and I thought ‘if they can manage, I can manage a single child.’

“In India, you have so much family around you, including your in-laws and you don’t tend to do anything much by yourself.

“The COVID thing was emotionally stressful and I had the baby blues combined with that. But we’re happy…we did it, we raised a child!”

Aditi, a process engineer, and Abhishek, a process operator, are both employed by Yara Pilbara, which produces liquid ammonia (used in fertilisers) and technical ammonium nitrate (used in mining explosives) at one of the world’s biggest ammonia production facilities on the Burrup Peninsula.

All of Yara Pilbara’s almost 200 production and administrative staff for the operations live in Karratha, many of them in company-owned homes.

Having worked together previously at an LNG plant in India, Abhishek says being employed at the same company and having work patterns that are not only flexible but residential makes family life much easier.

He also loves living in Karratha, which has a strong reputation for being multicultural, welcoming of newcomers and family-friendly, as well as being renowned for the quality of its “outdoors” life.

In combination with neighbouring Dampier, Karratha has often been described as having the highest rates of boat ownership per capital in the country.

“I’m working on a shift roster and Aditi is working Monday to Friday 9-5,” he explained.

“That offers us a kind of flexibility that we can look after bub whenever we need to. Either I can be there or she can be there.

“Karratha offers a lot of job opportunities but it’s also a very dynamic and vibrant society.

“If anyone wants to experience the real Australian outback, then they should move to Karratha.

“And it’s a small town so everything’s near. There’s more people-to-people contact and the community is very helpful.

“I like living in Karratha more than living in a big city.”

From a work perspective, both Aditi and Abhishek are excited about Yara’s impending move into the manufacturing of clean ammonia using renewable hydrogen.

“I didn’t actually realise I had a passion for that until I got here,” she said.

“Yara encourages diversity, equity and inclusion and is very open to these things.

“Now is the time to recognise where we are lacking [in terms of diversity] and fill those gaps.

“If we want to be competitive in the labour market and be more understandable from an employee’s perspective, then we need to think about diversity, equity and inclusion.

“It needs to be a focus and that’s why it’s my passion.”

While the couple are understandably proud of raising the now 22-month-old Viraaj “by themselves”, they realise there’s a difference between what they’ve achieved and doing it “alone.”

And as they wait for their newest arrival, Aditi is comforted by the fact that help, guidance and support is never far away in a tight community like Karratha.

After a brief stop-off in Sydney before coming to the Pilbara, she realises that’s not something to be taken for granted.

“Being a new mum, I find the mums-and-bubs group are really great and so are the midwives,” she said.

“Because he was born during that COVID time and we didn’t have support from family, I felt it was lucky to be in a place like this and not Sydney.

“Karratha is an ideal place to have a family, because there’s a lot to do for the kids.

“There are so many things going on and everything is so close, it’s just five minutes here and there.”