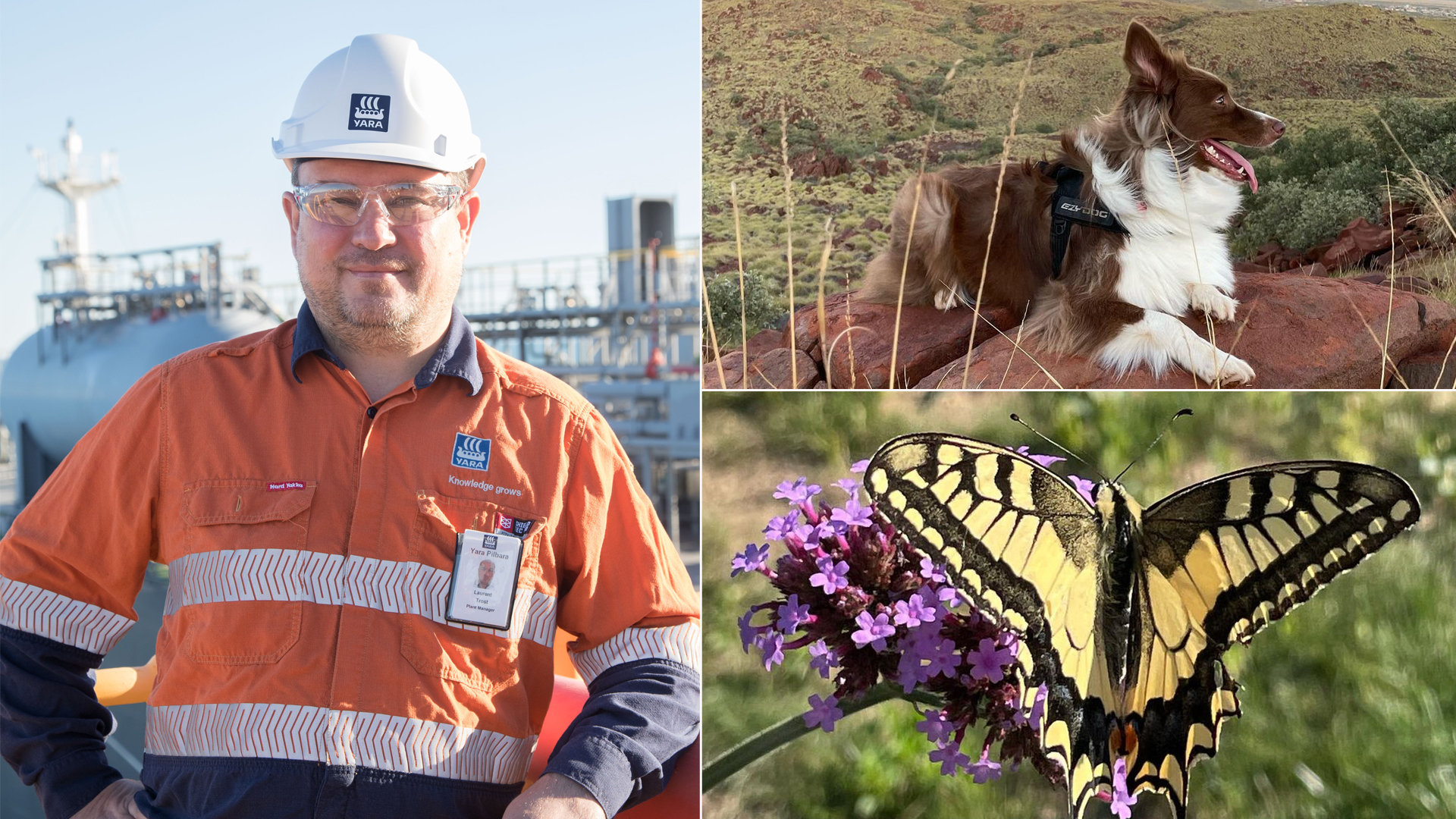 If you ever wanted an indication of where a career in mining and resources can take you geographically, look no further than Laurent Trost.

After training as a chemical engineer and starting his career in his native France, Trost spent time in Belgium, South Africa, Brazil, Russia and Colombia before arriving in the Pilbara in late 2020 as General Manager of Yara’s globally significant ammonia production plant on the Burrup Peninsula.

As anyone who navigated a G2G pass will tell you, it was a tricky time to move between states – let alone countries.

And it came amid a Pilbara summer, where average temperatures regularly sit above 35 degrees.

“It’s a challenging part of the year but when it’s really hot you can also enjoy fantastic sunset walks up the hill, you can go to Hearson Cove or if you have a boat you can go out to the islands,” Trost reflected.

“My family are nature lovers and coming to the Pilbara one of the great parts was enjoying the full set of nature spots, whether that was bushwalks, the rock art that we have here and the islands that surround us.

“That’s something we would not have expected. It’s fabulous to go out there in your boat and end up on a small island that makes you feel alone in the world.

“You can enjoy spots that are as beautiful as anything you’d seen in the islands of Mauritius or the Seychelles.

“And it’s all right here, within 20km of Karratha. It’s a unique part of coming to the Pilbara.”

Of course, there was also a significant career attraction in Trost trading the coast of Colombia for that of North West WA.

At Yara Pilbara he oversees one of the world’s biggest ammonia production facilities, producing both liquid ammonia (widely used in fertilisers) and technical ammonium nitrate (used in mining explosives).

That technical ammonium nitrate in turn helps underpin iron ore mining operations around the Pilbara which are vital to the economic prosperity of WA and Australia as whole.

“We produce around 800,000 tonnes of ammonia per year – and that’s about four to five per cent of the total worldwide tradable ammonia volume,” Trost explained.

“And we produce 300,000 tonnes of technical ammonium nitrate., which we are able to deliver very quickly to all the different mines that we have in the Pilbara.

“There are 10-12 trucks going out every day and that short supply chain ensures our mining clients can have stable operations in the Pilbara.”

Yara recently broke ground on Project Yuri, which will see one of Australia’s largest renewable hydrogen plants added to its operations on the Burrup.

Powered by on-site solar, the plant will produce up to 640 tonnes of green hydrogen each year – molecules of which will be “injected” into Yara’s existing processes to produce cleaner ammonia.

“Yara worldwide has an ambition to become fully green and clean by 2050,” Trost said.

“At the start, Yuri will represent only one per cent of our total production. But it’s a demonstration that this can be scaled up to a bigger volume and prove that [large-scale] green hydrogen and then green ammonia production is a real possibility for the future.”

Yuri is expected to start delivering hydrogen to the ammonia plant in 2024. In the meantime, you can expect Trost, his wife Veronique and daughters Anaelle and Elina to continue to forge strong links in the local community.

Karratha is renowned for its liveability and family-friendly atmosphere, and Trost says that’s exactly how he has found it.

“When we came here we were amazed by what Karratha can offer in terms of schooling – firstly all the primary schools that are in the little suburbs and secondly now my kids are in high school, two very good high schools,” he said.

“There are very good opportunities for kids to study and Karratha is also very based around sport, with complexes like the Leisureplex and all the different sports clubs we have in town.

“We have everything in town…basketball, soccer, netball and AFL. Soccer, for example, isn’t the most famous sport here but as Europeans it’s very important especially for my older daughter. Out of a city of 20,000 people, 1000 of them are playing soccer every week.

“There are so many other cultural activities that are developing and as a family this is a very good place to be.

“You make lots of friends very quickly. Most people are like us – a bit expatriated – and you come here and everybody knows that it’s not easy to be alone and have left everything from your home place to come here.

“There’s a kind of solidarity in the local population and that makes you feel very welcome from the beginning.”

The Pilbara is also the perfect place for Trost to indulge a passion for photography that started when he was living in Colombia and wanted to share with family and friends back in France what life in Latina America was like.

His Instagram account is now a tribute to the landscapes of North West WA – and the family’s beloved Australian Shepherd, Joy.

“A lot of what I used to see in Colombia was a shock for my eyes – there was a wow effect and I wanted to try to bring that wow effect into pictures to share with family and friends,” Trost said.

“Looking at the photos I’d taken with my phone I saw some of them reflected the wow effect, so I thought ‘why not share it?’

“And I got some feedback saying ‘thank you for sharing that, you make me feel like I’m travelling with you.’

“In Australia I’ve again had this wow effect, even doing small things like walking the dog on the hills or seeing a beautiful sunset.

“The sunsets here are so amazing and magic that I wanted to capture it in pictures.

“Keeping that link with family and friends is very important and hearing from them that Australia is amazing, hopefully that will help me motivate them to come and visit us.”