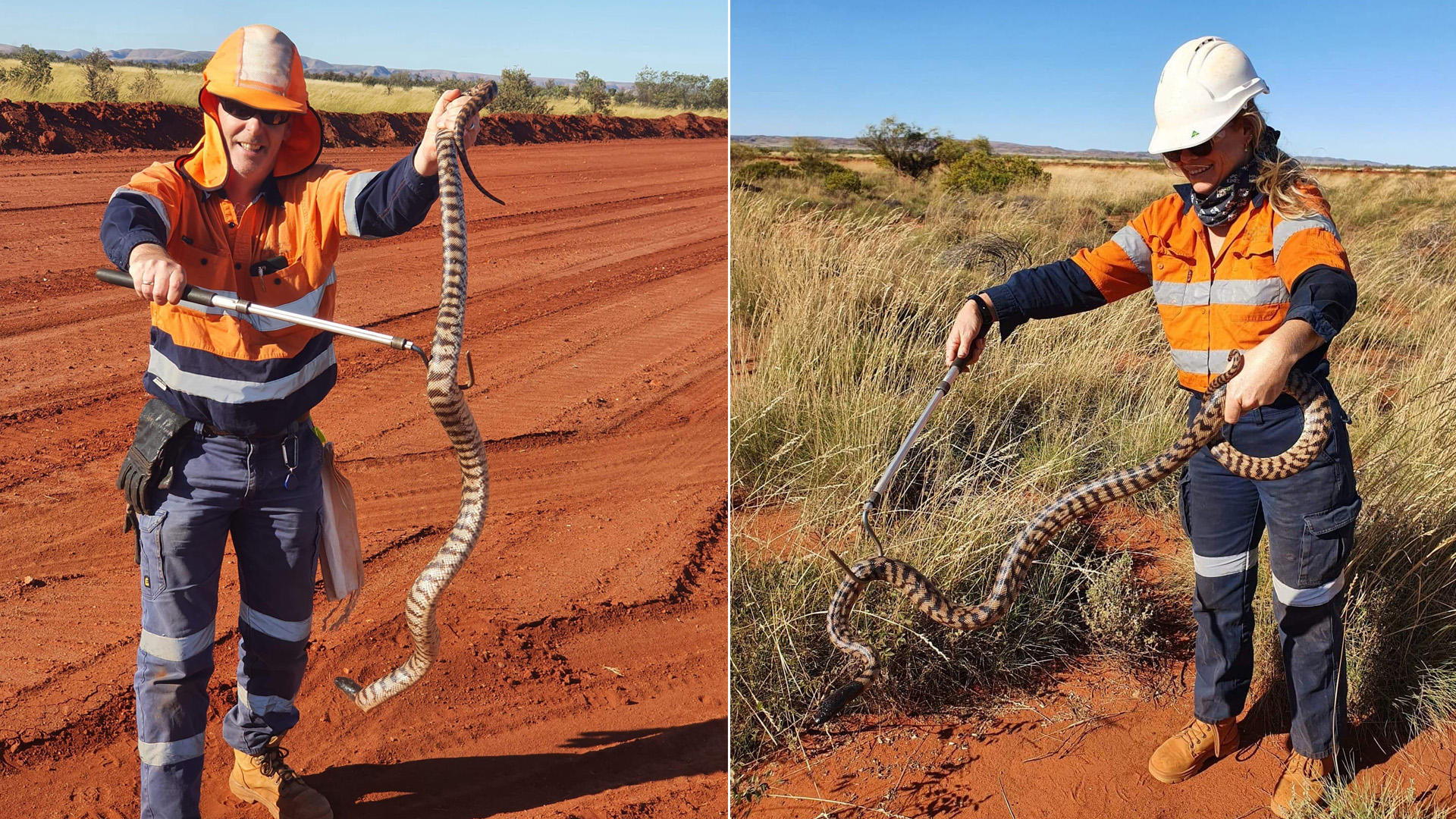 Everybody knows that working on a WA mine site can be a challenging gig.

Most operations are located in remote environments. It can be bloody hot and also pretty darn cold, sometimes at the same spot in different seasons. Meanwhile the days are long – usually 12-hour shifts – and often quite physical.

But it seems hard to think of a job in WA mining that carries the same level of challenge as that of Chris Hay.

Hay, you see, is a herpetologist, someone who specialises in the study of reptiles and amphibians. And while his work is far more broad than the resources sector, one aspect of it involves being a fauna consultant to mining companies and relocating often venomous snakes that find their way into operational areas.

“They can be anywhere from the mining camp to out on the work site,” Hay told the Mining HQ podcast.

“Part of our role is damage mitigation, so we’re reducing the damage done to the environment by relocating snakes that pop up where they shouldn’t be. We also offer the service to be called out to remove a snake that’s interfering with a work crew.

“But generally our snakes are pretty good at keeping out of the way.”

Hay grew up in country Victoria where snakes were a common sight and his initially “horrified” parents had to get used to his penchant for bringing home pet tiger snakes.

Essentially self-trained until well into adulthood, he now works alongside highly-regarded world experts in herpetology and toxinology in his role as an Honorary Research Fellow at the Venom Evolution Laboratory at the University of Queensland.

Hay is the Director and Senior Instructor for the Australian Reptile Academy and his wife also works in a similar field as a biologist and toxinologist – no doubt handy common ground given they have 25 snakes at home, some of them highly venomous.

In recent times, Hay’s work has taken him into the Pilbara, which is home to three dangerously venomous snakes the: the death adder, the mulga and the western brown snake

“I have been working on a project in WA for the last year. It is a pipeline project to supply water and transport slurry to and from the Iron Bridge mine,” Hay explained.

“My position involves inspecting the open trench and removing and documenting any wildlife that gets caught in the trench. These animals are then released away from the worksite.

“Snakes are well represented in the collection of wildlife that turns up in the trench. We use specialised handling equipment and our highly developed skill set to be able to safely interact with the snakes, many of which are highly venomous.

“We also make ourselves available to remove any snakes that may turn up around the accommodation or the offices. All supervisors have our phone numbers and we are essentially on-call 24 hours a day.”

Hay’s current trainee Tahra Golightly provided some insights into the challenges of life working on the project.

“Snake handling in the mining industry is rough and rugged and the elements are extreme,” she said.

“Walking 15 kilometres in relentless dust, with 42-degree heat blazing down on you, all the while trying to wrangle a highly venomous western brown snake, is definitely not for the faint hearted.

“I am consistently pushed outside my comfort zone but I honestly wouldn’t have it any other way. Fauna spotting has provided me with incredible opportunities to work with and learn about Australia’s amazing biodiversity.”

While the pair’s personal record saw them catch a whopping 27 snakes in one day, Hay wants people to understand snakes are usually more afraid of humans than vice versa.

It’s a message he passes on during the snake handling, snake identification, snake safety and snake bite management training he delivers to a variety of clients around Australia, including zoo staff, ecologists, university students, military personnel and fauna handlers.

“They will flee if given the opportunity, so as long as you are giving them the space they are absolutely not coming near you.

“Snakes identify humans as a threat and a predator and they will do everything they can to avoid a potential predator. If you happen to be very close to one, it’s important you stay still as their eyesight is quite poor and they can only see moving objects.

“If you are bitten then first-aid is really critical. The only reason I’m still around is because of applying that pressure and immobilisation snake bite first aid technique.”

Hay’s passion for snakes has taken him overseas into the USA and Asia, where he’s got up close to rattlesnakes, king cobras and spitting cobras.

But some of his favourite species remain Australian, including the death adder – the type of snake that very nearly killed him back in 1996.

“Another favourite is the coastal taipan, which is a highly intelligent and very spirited animal,” Hay said.

“It does take a lot of skill to be able to work safely with taipans.”